My wife is in the market for a new laptop this spring, which means I'm in the ever so fun position of recommending which computer she should get. She's been a lifelong Windows user, but Windows 8 and 10 have soured her to the platform and she's seriously considering a Mac. YES!

"What MacBook do you think I should get?"

It seems like such an easy question, but it's really not. There's the MacBook Air at the bottom of the line, and seems like the obvious choice in some regards. But then we look at the new MacBook and things get more complicated. It's thinner, lighter, and has a better screen, but it loses the external ports and some processing power. And once you're spending enough to get a MacBook, you could put the same money towards a MacBook Pro, which is better in every way on paper, but is a tank of a laptop1.

So what do you get?

The MacBook Air is the first choice as it is the cheapest and is very thin. It also has the full slew of traditional computer ports on the sides. My wife rarely uses anything over USB anymore, but she would miss it somethings if it wasn't there. However, it's hard to get used to that screen in 2015. It's not terrible, but it's the only non-retina Apple device you can buy anymore2 and I don't feel great about that.

So what about the MacBook? The MacBook gets you the nicest screen in the lineup and you get an even thinner body. But you do lose all ports on the sides. As I said, she doesn't use much over USB, but this is her first Mac and I don't want her experience to be centered around all the things it can't do that Windows could. Also, the reduction in power is a concern as well. I know most reviewers said the speed was fine, but she's going to have this for years and I don't want her to have a beautiful screen that runs a slow version of OS X.

That leaves the MacBook Pro, which seems to tick all her boxes. It has the retina screen, check. It's incredibly fast, fantastic! It has all the ports she could ever want, yup. But then she picked it up. "Whoa this thing is heavy!" she exclaimed. It's much heavier than the 3 year old laptop she's replacing, which doesn't appeal to her at all.

This all got me thinking back to this magical grid: 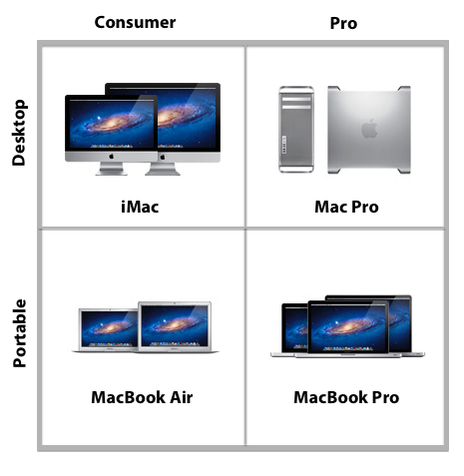 This isn't the Apple we have anymore. I know that grid was created in the late 1990s when Apple was wildly unfocused and needed to simplify their product line, and holding true to that simplicity is pretty hard when you're selling as much as Apple is these days. But that conception of your product line made shopping for a Mac pretty easy for many years. Now it seems that no matter what computer you get you're making some trade offs. Speed, screen, and size...you can choose 2.

It really makes me grateful that my next computer is going to be an iPad.

So that iPhone battery case, huh? Everyone tends to agree that it's…