We're Going to Be Using Our Apple Watches Poorly 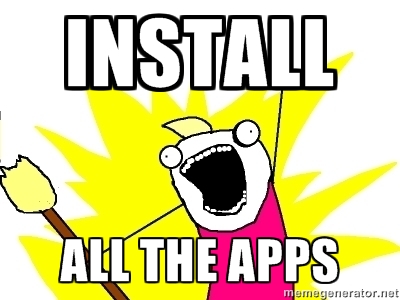 It’s currently late morning in Australia, and people are starting to get their Apple Watches. Mine will be coming in tomorrow afternoon, and to say I’m very excited would be the understatement of the year. I’m dying to get my hands on this thing and try it out in the real world!

Within the next 24 hours, most launch day deliveries will be done and people will be playing with their new toys. This will kick off a wave of all of us using our Apple Watches stupidly.

I think that everyone, myself included, is going to get their shiny new Apple Watch and load it up with a bunch of crap. There are over 3,000 apps already available to download, and we’re going to install way more of those on our Watches than we really should. There’s a game section with a bunch of free games that we’re going to try; none of which will likely still be played a few weeks down the road. There are productivity apps, apps for travel, apps for your health, apps for news hounds, apps for cooking, and for shopping, and for sports, and for weather… There’s a shit-ton of apps out there, and we have no idea which apps are going to be useful and which ones are going to be a waste of time, but it’s a new gadget, so we’ll try them all!

The truth is that we’re going to use our Watches a lot over the next few weeks, and they’re going to be weird and confusing, because we really don’t know what we’re doing yet. I wrote earlier this week about how I think that everyone will have a few select things for which they end up using their Apple Watch. I still stand behind that sentiment, but we’re not going to be like that right away. These first few weeks are going to be a wild west of installing all the things and figuring out what we like. We’re going to be using our Watches poorly. Very poorly.

And that’s all a part of the fun. If you’re getting your Apple Watch today/tomorrow, you’re a silly person who woke up at a weird hour to order an expensive gadget you don’t need. Being there at the beginning and being one of the people figuring it all out for the rest of the world is what we signed up for. Let’s have fun and mess around, but remember that if you think the Watch is a mess, it may not be the Watch, it could just be you.

I know I’m a couple days late on this story, but…

Some Changes Coming to Android Wear