Get in Touch
September 04, 2018
microsoft  surface

From Go to Pro: A Whole New World

While the Surface Go is a “sub-$400 tablet” in the absolute sense of the word, it’s not really when you consider the basically required accessories you need to get for it. Here’s the whole set: 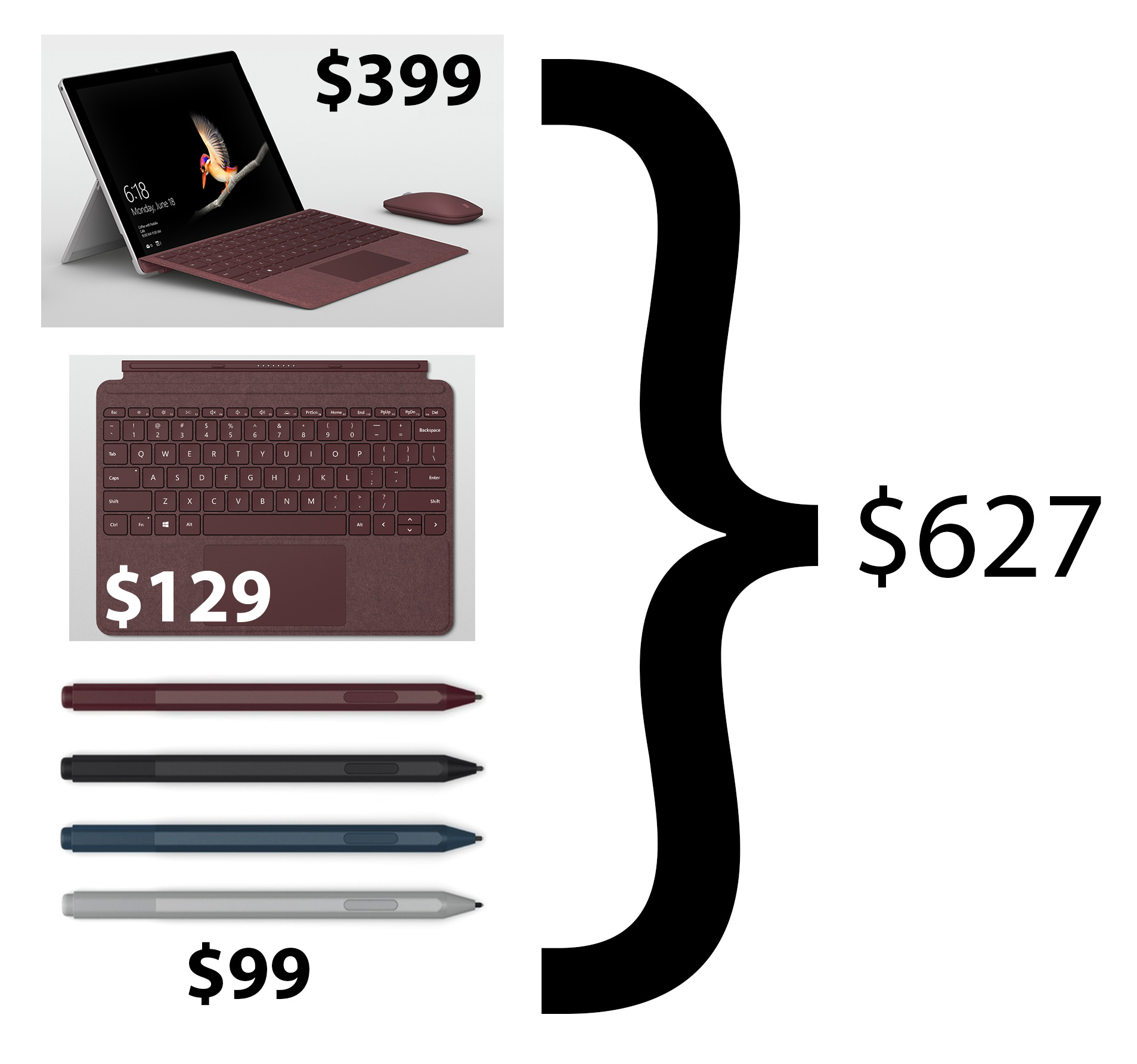 That's $627 just to get a working Surface Go setup up and running. That's a bit more than I'd like to pay for something I'm not totally happy with, so I had 2 options: return the Go and call this whole thing off, or spend more to get something better.

I was going to throw this whole experiment away, but then I got turned onto this bundle: a Surface Pro with a Core i5 processor, 128GB of SSD storage, and a Type Cover for $7991. Yes, that’s 2x what I paid for the Surface Go, but it was also only 27% more than I paid for the whole set of Go accessories. So I did it2.

The Benefits of Going from Go to Pro

The short of it is that everything is doubled compared to the Go model. The SSD went from 64GB to 128GB, the RAM went from 4GB to 8GB, CPU performance measured in Geekbench almost preciesely doubled, and the total screen resolution went from 2 million pixel to just shy of 5 million. Oh, and the bezels, while basically the same size, look half as big on this large screen device.

My first impressions of the Surface Pro is far more positive than my impressions of the Go. Setup was mostly a breeze, and very similar to the macOS setup experience. I signed into my Microsoft account and Windows logged me into all my Microsoft apps. Edge was a weird case (isn’t it always?) in that it synced about a quarter of my bookmarks and none of my passwords came over. Even after about 24 hours with this device, they’re still not here, so I guess it’s time to add them all…again.

In better syncing news, OneDrive allowed me to have most of my documents and desktop back in working order in little time. It even synced my desktop wallpaper over too. Much like iCloud on the Mac, it immediately had all of my files displayed in the file manger, but they were not downloaded until I interacted with them. This mercifully means that my many gigabytes of stuff I have stored in the cloud didn't load itself onto my relatively small 128GB hard drive.

In terms of performance, it’s like a glass of water in the desert. No longer does the simplest of task bring this computer to its knees! Things are pretty quick, and while it’s still quite poor in terms of games, it’s a very capable productivity and content consumption machine. I don’t think the Surface Go needed to be quite this quick, but there is a line where computers get acceptably quick, and the Go was decidedly on the wrong side of that line. The Surface Pro doesn't feel like a super high end computer, but it certainly feels like it can keep up with me.

And then there’s the hardware. Hardware is almost uniformly as good as it was on the Go, but for reasons I’ll get into later, there are more ports, but I like them less so far.

I’ll surely have more to say about this device as I use it more, but up front I’m much happier camper than I was at this point in the Surface Go’s life. How much more I like it is up in the air, but now I feel like I’m using an honest-to-goodness functioning computer again, which is very nice.

Do They Even Know Excel Script? Hmmmmm?