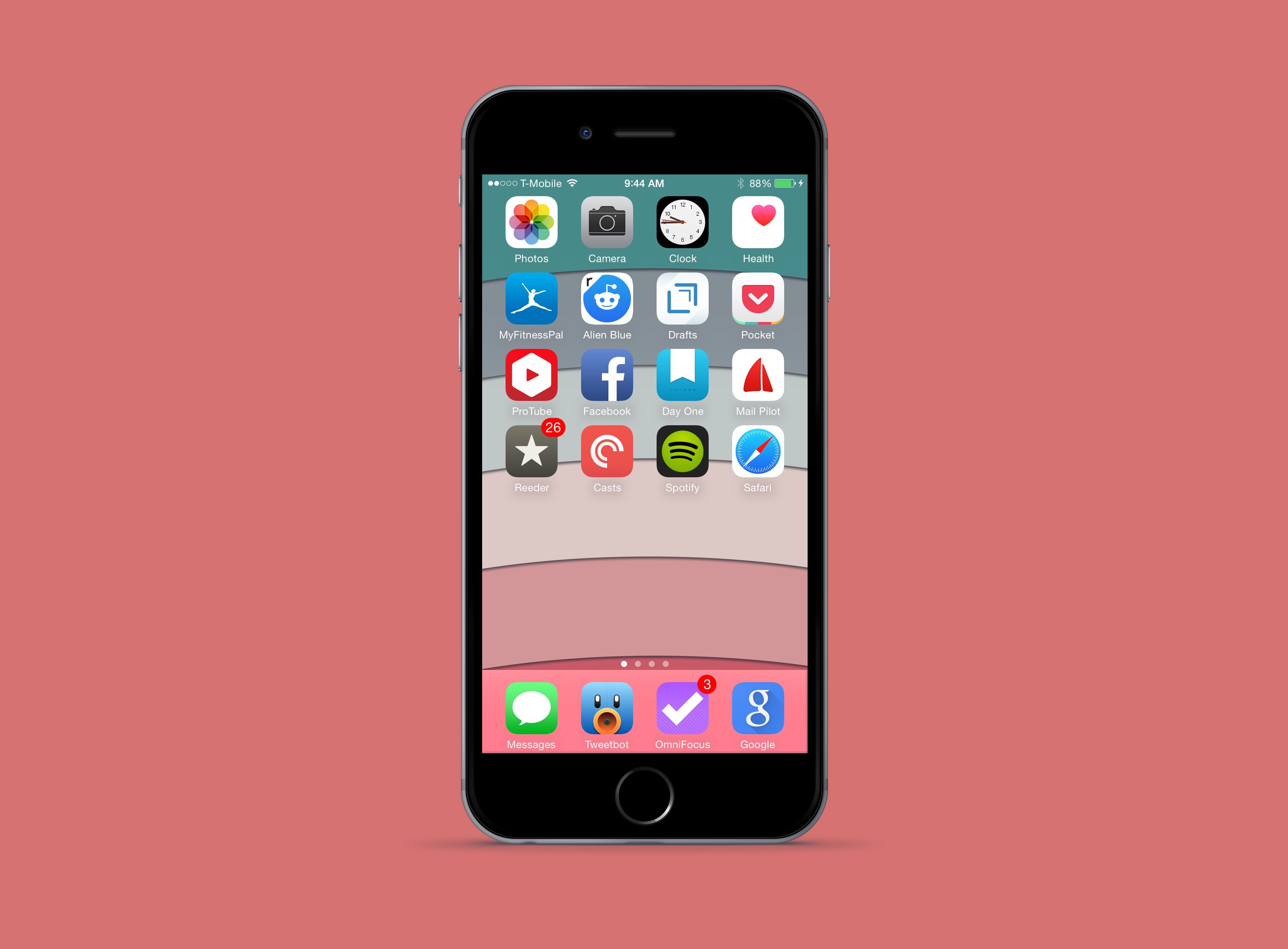 Another month, another home screen! If you remember, I had a jailbroken phone last month, but I have since restored my phone to stock iOS. Life is good, but I do miss some of the tweaks that I had from jailbreaking. That said, I am getting insane battery life on iOS 8.2, which is not a bad trade off.

Restoring my phone did allow me to start fresh and rethink what I had on my home screen.

My wallpaper is once again my own creation. If you want it, just $3 supports this site and gets you access to 5 wallpapers for your phone.

MyFitnessPal - free: I think everyone knows about this app already, but I started using it 3 weeks ago to track my eating. I’ve logged every single day, and it’s actually helped me lose some weight. Simply knowing how much I’m eating has gone a long way to being healthier (which isn’t easy in the dead of winter).

Pocket - free: After years, and years using Instapaper and Pinboard to save links for later, I’m trying to use Pocket as a replacement for both services[1]. I like the app a lot so far!

Mail Pilot 2 - $9.99: I gushed about this app in my review, and it’s still my email app of choice on iOS. Microsoft Outlook is a close second, but its lack of a desktop app makes it less useful to me.

Pocket Casts - $3.99: I think Overcast is built for people who don’t subscribe to as many podcasts as I do. I kept losing shows that were released but were added to the bottom of my queue, so I couldn’t figure out what was new and what was old. Pocket Casts’ timeline view works well for me.

Spotify - free: Beats was a nice vacation last month, but Spotify is just a better app.

Tweetbot - $4.99: I’m back to Tweetbot after a month with Twitterrific. The Tapbots crew must have a better relationship with Twitter, because their more advanced Twitter integrations seem to always work better and have to be fixed less often that Twitterrific.

Google - free: I do so many searches on my phone that it just makes sense that Google gets easier access.

I'm going to be on the road for most of the day,…

Samsung Shouldn't Have Listened to the Tech Pundits

Samsung unveiled their Galaxy S6 phones today, and oh boy, do I…