My Favorite (and least favorite) Movies of 2017

This list is slightly late, but considering how back-loaded the year tends to be when it comes film, it’s hard for normal people like myself to get out there and see everything by New Year’s Day. A full month into 2018, I think I have seen most of the movies I will have seen from 2017, with a few notable exceptions1 I have seen what I was dying to see, and with the Oscar nominations already out, I figured now was the time.

I chose my 6 favorite and 2 least favorite movies of the year, but there are a number of films that didn’t quite make the cut either way. 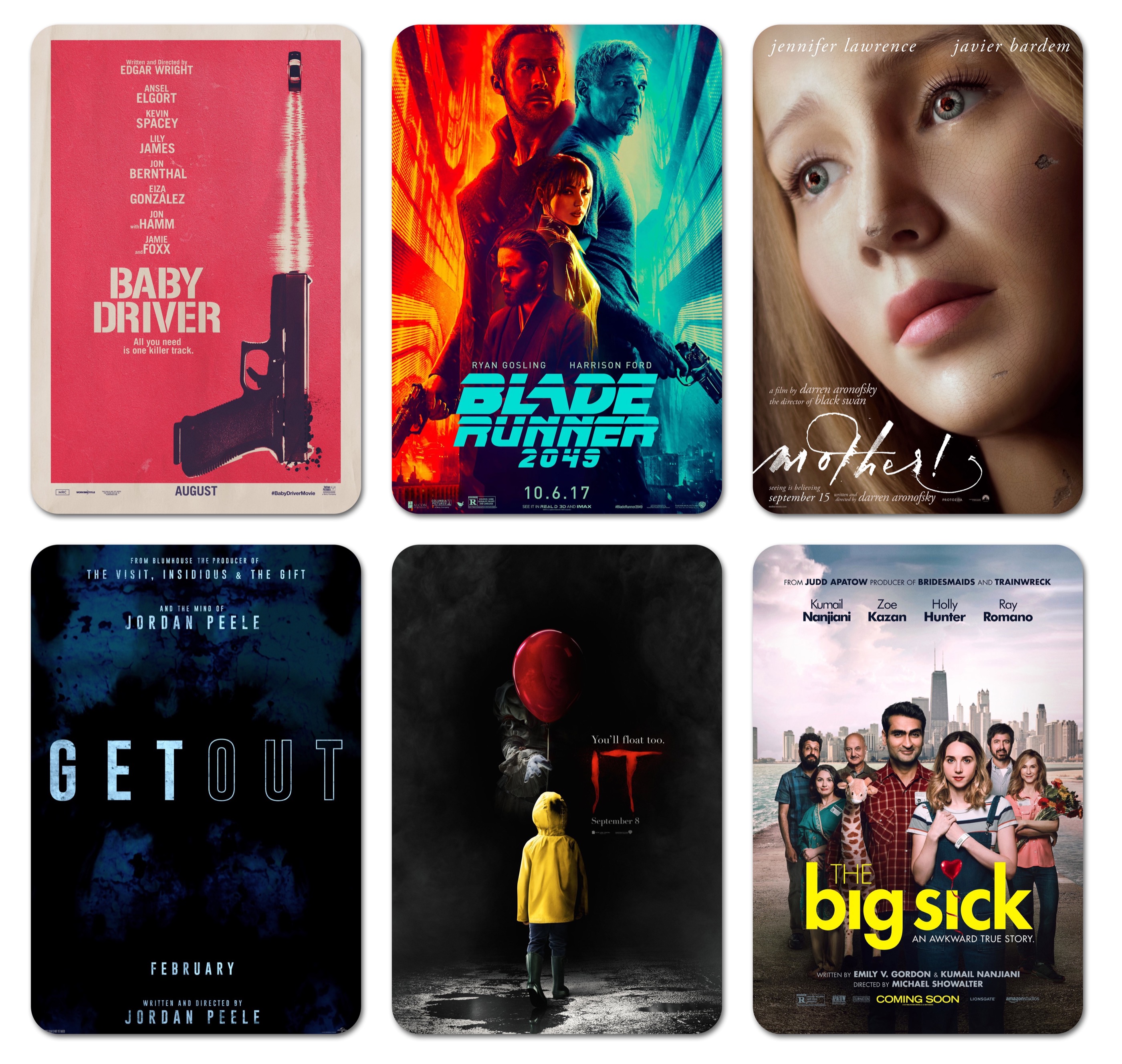 Edgar Wright really has me pegged. Shawn on the Dead, Hot Fuzz, The World’s End, and Scott Pilgrim vs the World all have solidified Wright as my favorite working director. Baby Driver is everything we wish summer action movies would be: fun without being dumb and exciting without being predictable. And oh boy, was this a thrilling ride! From the opening scene onward, this movie is a thrill ride.

Oh, and the way this movie blends music and on-screen action is unrivaled in modern cinema. The amount of work that went into making every shot in this film match exactly with the soundtrack is enormous. Bravo.

I was never a huge fan of the original Blade Runner, which I always felt like I should like more than I actually liked. The sequel leaves me with no conflicting feelings at all: this is a masterpiece.

Ryan Gosling gives what I think is the best performance of his career, and the supporting cast of Robin Wright, Ana de Armas, Dave Bautista, Sylvia Hoeks, Harrison Ford, and Jared Leto round out a great ensemble performance. Sylvia Hoeks in poarticular stood out to me as a fantastic villain, and I hope to see her in more movies soon.

The story this film tells is deep without being complicated. K’s (Gosling) journey is easy to follow, but the themes addressed raise tons of questions in the viewer.

If nothing else, this movie is worth seeing for the visual alone. The cinematography on display is simply astounding, with each and every shot looking like it would be the best, most memorable shot in almost any other film. When the credits rolled and I saw Roger Deakins credited as the cinematographer, I both nodded my head in understanding, but also found myself applauding a veteran like Deakins being able to still create unique and interesting worlds.

Nothing I can say here will get anyone to change their mind on this divisive film, so I will just say that this movie was not what I expected at all. Darren Aronofsky is another one of my favorite directors working today, and he delivered a film that starts out normal-ish, turns weird, and then turns into the most insane piece of cinema I’ve possibly ever witnessed. This movie needs to be seen to be believed.

Credit to this movie for coming out in February and still being a film I think about on a regular basis. Jordan Peele delivered a debut film (which he wrote and directed) that feels more like a 3rd or 4th effort. I knew Peele’s comedic work, and really liked him, but I was not expecting this film to be as good as it was.

Get Out explores a host of different issues and does so with a deft hand, all the while delivering an original horror film with a distinct voice of its own.

Another horror movie! I am not a huge fan of horror films, but the combination of Get Out and It likely makes 2017 the best year for horror in my opinion. It did not scare me a ton, but it was incredibly entertaining. The opening sequence has played in my head endlessly since watching this, and the rest of the film is full of moments I will remember for a long time.

Bill Skarsgård plays Pennywise here and has one of the most underrated performances of the year. He transforms perfectly into the role, creating a version of Pennywise that I feel eclipses the already impressive performance of Tim Curry in the 1990 TV movie.

The Big Sick tells the “based on a true story” tale of Kumail Nanjiani and Emily Gordon’s early relationship. It’s a love story comedy all the way through, but it doesn’t feel like a romantic comedy. As you likely already know, Emily spends much of the movie in a coma, and the drama comes from Kumail getting to know and understand her parents. Emily’s parents are played by Holly Hunter and Ray Romano, both who steal the movie, each delivering powerful performances. I don’t know what it’s like top be married for 30 years, but their relationship felt very real and not at all like roles created just to fit the narrative structure of this film.

Critics will point out the areas that this movie strays from the real story of their relationship (they weren’t broken up at the time of the coma, Kumail’s mom didn’t disown him, etc.) but I didn’t know those details going in, and even if I did, the changes were made to make the story more compelling for the big screen. 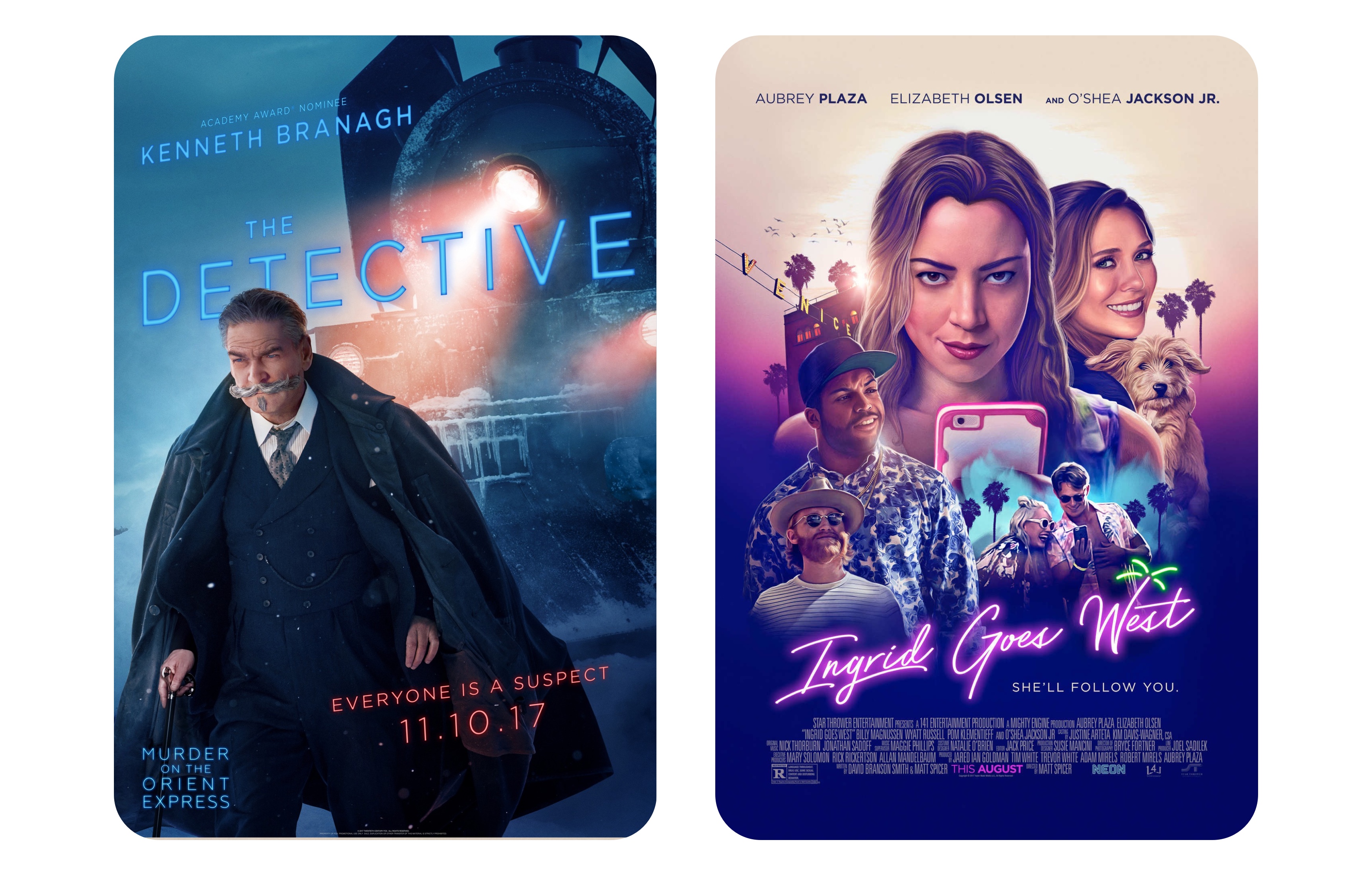 I thankfully didn’t see that many movies this year that I outright disliked, but 2 films distinguished themselves: Murder on the Orient Express and Ingrid Goes West.

I would describe both of these films as, “People I don’t like, doing things I don’t care for, in a style I don’t enjoy.” None of the films really gave me anyone to root for. In the case of Ingrid Goes West, that’s the intent, as main character Ingrid is an anti-hero, but that film gave me no one else to grab onto and root for. For Murder on the Orient Express, I simply didn’t care for anything in the film, least of which were the characters.

And while Ingrid Goes West had me looking at my watch every few minutes hoping it would be over soon, Murder on the Orient Express was (pardon the pun) a train wreck. The opening scene has the least compelling and more overly contrived “courtroom” scene I may have ever seen on film, and the movie doesn’t get better from there. It’s just one flacid scene after the next, with little drama, and minimal intrigue. It also has the slowest foot chase I have seen in a long time put to film.

And it’s a shame too, as the story this movie was recreating is quite compelling and the cast was very classy. Willem Dafoe, Judi Dench, Michelle Pfeiffer, Johnny Depp2, Josh Gadd, Penélope Cruz, Daisy Ridley, and Kenneth Branagh at the helm as lead actor and director. This should have been so much more than the mess it ended up being.

Target and Best Buy are Shifting Away from CDs