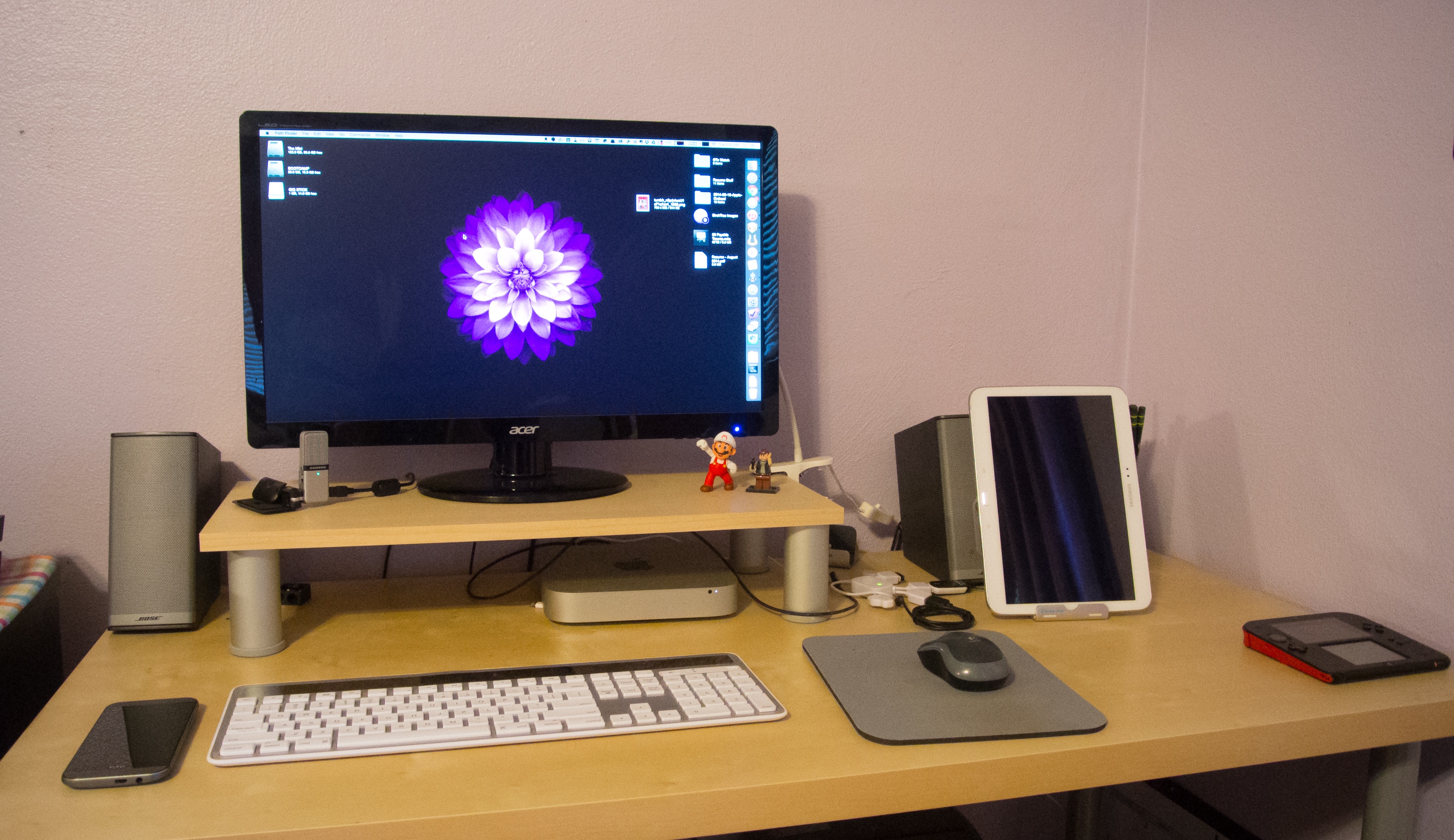 These guys have been amazing for the 5-ish years I’ve owned them. They have since been replaced by the Series 3 model, but these are a steal for the price you can get them for on Amazon. They get impressively loud and match very well with whatever your Mac of choice is.

I still maintain this is the best Android phone money can buy if you are an Apple fan. The phone itself feels incredible in hand and while it is “a big phone,” it hides its size a bit with a nice curved back and precision-cut edges that would not feel out of place in an iPhone.

I am enjoying my 6 month vacation in the world of Android, but much like Windows Phone, this is only a vacation. In 2015 I intend to go back to the iPhone.

While not the best microphone in the world, this little guy surprised me. I’ve been using this guy to record my new podcast (which is totally awesome and you should listen to). I would like to get something nicer soon, but this guy is a solid starter mic.

You don’t have to spend a fortune to get a nice computer monitor. Colors look good, viewing angles are great, and while 1920x1080 isn’t retina, it doesn’t look bad.

I’m actually pretty amazed at how great of a value this guy was back in December 2012! Not only was this by far the cheapest Mac you could buy, but it’s also still the same model you can buy from them.

I wrote about this guy back in March and I stand by every glowing word of that review. The solar charger means that the keyboard is incredibly thin, and I don’t have to have a stash of AA’s to throw in here every few months. It’s hard to find a keyboard that is specifically made for Macs, and it’s great that this one is so good while being quite affordable.

My only qualm with this keyboard is that there is no CAPS LOCK indicator, which much like the iOS keyboard, means you don’t always know if you’re capped or not.

G - Mario and Han Solo (at your local Target)

My workspace is usually pretty clean, but these little dudes remind me of what we’re supposed to be doing when we’re “making stuff.” Most of us will never make something as iconic as Mario or Han Solo, but that’s what we should aspire to. Whether you’re writing a blog, designing an app, or making something completely different, try to make it amazing.

Or maybe I’m just a nerd who likes Mario and Star Wars.

I’m not picky when it comes to mice. I just want something that works and feels decent in hand. I have tried high end mice before and I just don’t like them. If I’m being honest, I actually prefer Microsoft’s cheap mice, but this one lets me connect with the same USB dongle as my keyboard, so I switched sides.

This is the worst thing on my desk. I got an incredible deal on this tablet earlier this year. I should have kept the money.

I’m astounded that Samsung let a product like this out the door in 2013[1]. This is the tablet they had matched up against the iPad Air, which is an embarrassment. Opening multiple tabs in Chrome is a risky move, and even larger sites like The Verge have brought the tablet to its knees. I’ve tried a multitude of lightweight launchers and ROMs to get this thing to run faster, but it’s hopeless.

Samsung didn’t even take the trouble to update it past its shipping version of Android, 4.2. I have much more to say about this tablet, but I’ll stop there.

I keep it around exclusively as an Instapaper reader and video podcast viewer, which it does…competently.

I’m a Nintendo fanboy at heart, and this 2DS is my portal to that world. I really adored The Legend of Zelda: A Link Between Worlds is my favorite game on the platform and the Super Smash Bros. demo has taken over all of my game time this week[2]. When I can’t think of something to write, I like to pick it up and play a little bit. Even if it doesn’t spur creativity, at least I get some quality game time in.

K - IKEA desk (build your own)

Simple, simple, simple. That’s what I wanted from a desk and most desks out there are either too busy for my taste or way too expensive. I was able to build this from IKEA’s build your own desk assortment for less than $50 and I’m very happy with it. Its minimal nature means that I really notice when it gets cluttered or when I leave stuff on there that really shouldn’t be there in the first place.

This may be old news to a lot of people, but it's…

I bought myself a Pebble watch [https://getpebble.com] last week. My…