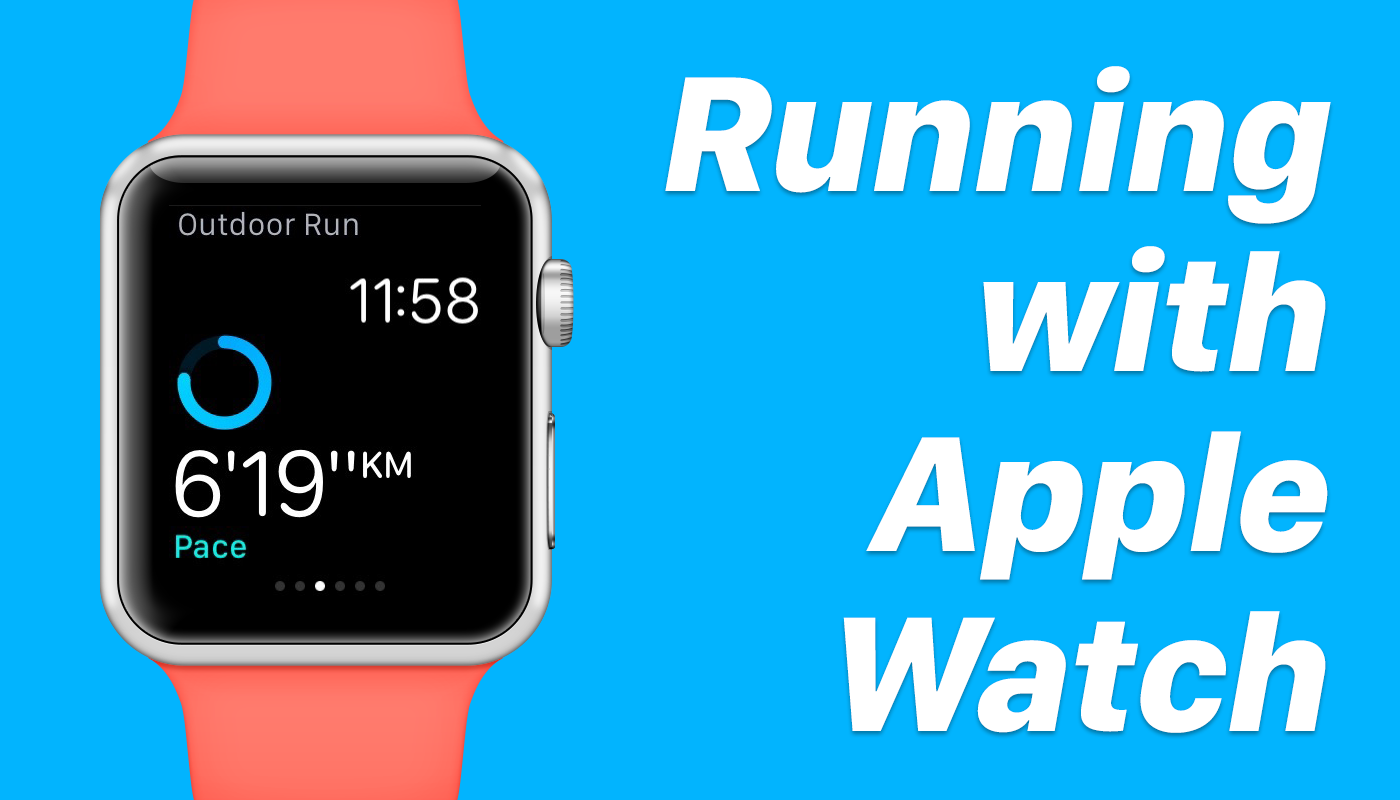 I have been using the Apple Watch to track my workouts for the past 3 weeks, and I’ve run it through its paces as a workout companion. I’ve logged 13 workouts (10 runs, 3 walks) both indoors and outdoors. This is easily the most active I have been all year, and it’s fair to say that the Apple Watch has made me not only a more motivated, but also a smarter runner.

I should note here that everything in this piece is based on the Workouts app that comes with the Watch. You can also use apps from other companies like RunKeeper, but I’m not talking about those today.

Also, there are a number of workouts that the Watch will track, but this is a review of running with the Watch. So we’re going to focus on that.

Initiating a workout is simple enough. The Watch does not automatically track your workouts, so you have to launch the Workout app to initiate tracking. Your most recently used workouts are at the top of the interface, so don’t have to filter through workouts you never use. It’s an obvious, but welcome feature.

Once you’ve selected what type of workout you’re doing, the app prompts you to set a goal. You can set a goal based on calories burned, time elapsed, or total distance. Alternatively, you can set no goal and just run. You can choose whatever you want, but the app also shows you a suggested default as well as your personal record for each stat.

It’s a nice system, but there are a few quirks that bug me about it. For one, the app likes to forget your preference for miles or kilometers. I know I live in the United States and we tend to do miles, but for whatever reason, I like to track my runs in kilometers. Every week or so I have had to switch it back.

My love for kilometers leads to another problem as well. While my Watch tells me my progress in km, the Activity app on my iPhone shows everything in miles. I’ve dug through all the settings and cannot find any way to change this. I know this is a minor frustration, but it seems odd that I can change the default on the Watch but not on the iPhone.

Once you get going, the Apple Watch turns into quite the helpful running companion. Just like the Remote app, the Workout app overrides the system setting to return to the watch face after a few seconds of turning the screen off. The app stays open until you manually close it. This is a smart setting since one the of the advantages of having a screen on your fitness tracker is having glance-able information as you run.

While in the middle of a workout, you see the current time, a ring that shows your progress towards whatever goal you set for the run, and one additional piece of information. You can choose between:

Each person can figure out what setup works best for them, but I have found setting a distance goal means the ring will show me my relative distance and the my heart rate shows me if I’m pushing myself too hard.

Depending on your goal (time, calories, or distance), the Watch will tap your wrist at certain milestones. If I’m running a 5k, I get a tap every kilometer as well as one at the halfway point. This is in leu of the vocal feedback you get from apps like RunKeeper or Nike+. While this was initially upsetting, I don’t really miss it that much.

I have found that having my heart rate constantly available has been my favorite and most useful feature. By seeing my heart rate, I have discovered that if I push myself over 170 beats per minute, I’m going too hard and am going to have to break into a walk soon. However, if I keep my heart rate in the 150–165 range, I can go forever.

This is wildly useful information to have! Previously, I would find myself too tired to keep running sometimes and no know why. I knew my legs had it in them to do more, but I had to slow down to a walk. I didn’t really have a good way to pace myself before, but now I can glance down at the Watch and see where my heart rate is. If I’m over 170, I need to slow my pace immediately or I’m going to have to walk for a bit and catch my breath.

I never saw the appeal of having a heart rate monitor on a fitness device before, but now that I have one I can finally see its use.

It is also worth noting that third party apps cannot access the heart rate monitor. Workouts is the only option right now for those who want that data.

Running Without Your iPhone

The Apple Watch can log workouts even if you leave your phone at home. You still get all the same data you would if you brought your phone, but it has to make a guess on your distance traveled. Since the Apple Watch does not have GPS built in, it guesses distance based on how many strides you take and how fast you’re making them. It accomplishes this by learning your average stride length during the workouts where you do have your phone.

It is important that you take your phone with you for a few runs before going out without it. I did one run with my phone before going out there with just the Watch, and I got pretty poor readings. I ran a 5k route that I know very well, and my Watch told me I hit my 5k goal around the 4.7k mark. It was nice to see it think I had the fastest run I’ve had all year, but I know there’s an asterisk by that time.

I have taken my iPhone with me many more times since then and then retried an iPhone-less run. The second time it was far more accurate. I would say it was within 20 paces of the exact distance, which is a huge improvement!

What Could Be Better?

The Apple Watch uses GPS to measure your distance when running, but it doesn’t let you see your map after the fact. Apps like RunKeeper show you a map along with your pace at each point. It’s fun to see where you slowed down and where you were able to pick up the pace. It’s not a deal breaker, but it would be nice to see this data.

Show me my data in metric on my iPhone

As I mentioned earlier, the Watch has no trouble switching to metric measurements. It seems odd that the iPhone app is stuck in whatever your nation’s default measurement system is. Why is this an option on my Watch but not on my phone?

I want to set goals

While it’s satisfying to see that workout goal ring fill up as I run, it would be nice to be able to set long term goals. For example, I want to run 500 kilometers in 2015[1]. That was an easy goal to set in RunKeeper, but it’s not something I can do in Workouts. I’m currently tracking my progress with paper and pen.

Save my workouts to iCloud

Currently, all you activity stats (including workouts) are saved to your device only. They will be a part of any phone backups you do, but that’s it. This means that if you have an Apple Watch for a year and then buy a new iPhone, you have to restore that new phone from your previous phone if you want to retain your workout history. If you set it up as a new phone, you’ll lose all of your data. That’s crazy!

Your activity data should be treated like your iCloud Photo Library where it is automatically backed up on iCloud and synced to all your devices. When you log into your iCloud account on a new phone, it should retrieve all your activity and workout history. Compared to Photos, it’s a tiny amount of data, so it shouldn’t be a problem. Once again, this is something you get with RunKeeper and Nike+.

Social integration would be nice

More data on the watch face

I think that Apple made the right choice by not trying to shove too much on the watch face when running. It’s quite glance-able right now, but I have pretty good eyes (with my contacts in, at least) and would love it if there was a more data-dense view where I could see all of my run stats on the same page. I really don’t think this is something that will be coming down the pipeline, but I’m still putting it out there.

Along the same lines, it would be very nice to have music controls integrated into the app somehow. As it stands now, you have to exit the Workouts app, return to the watch face, and bring up the playback controls glance. This should be easier, since almost everyone listens to music/podcasts/books while they run.

The Apple Watch is my favorite all around fitness device I have ever owned. I absolutely love that my regular watch is also my step counter as well as my workout tracker. That said, I do think that there is a lot of room for the device to grow as a workout companion. The Watch falls short specifically on long term goal planning, which can be just as, if not more important than your single workout stats. I also find it shocking that your workout history is not saved to iCloud, but only your local device. They don’t need to have a web interface (although that would be nice), but this would make me feel more secure knowing that my data will still be there if I lose my phone or don’t want to restore from a backup.

Despite these flaws, I am going to stick with Workouts for all my run tracking for the foreseeable future. Its ease of use, heart monitoring, and iPhone-free capabilities make it a solid running companion for me. If you’re deeply invested in a competing service, most of them already have Apple Watch apps available, so you can continue to use them if you prefer.

What if third parties could make complications for the Apple Watch? This…

In this second pilot episode (that's a thing, right?), I talk about:…