This Isn't a Home Screen, it's a Utilities Folder 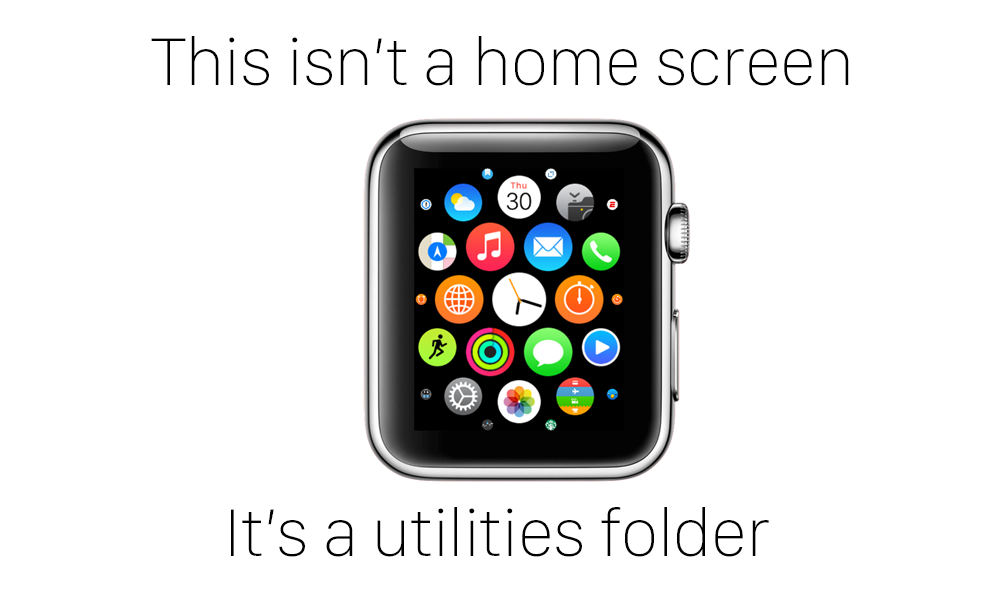 Apple calls this the home screen, but I think that’s a misnomer. I think the term “home screen” refers to a device’s neutral state. It’s the state your device spends the most time, and is the “home” for most intended uses for the device.

On the Mac, this is the desktop (although it’s never technically called that by Apple). This is where you browse files, launch apps, and it’s a layer on which all of your running apps sit. On the iPhone and iPad, it’s the grid of icons. Again, this is where you launch apps and get notified of new information (icon badges). On the Apple Watch, I don’t think that the cluster of apps is the main interface at all; it’s the clock face.

In the past week’s use of the Apple Watch, I have found myself going into the Watch’s home screen less and less everyday. I use complications to access my most commonly used features and glances to access about a dozen apps that I use somewhat regularly. If I want to open something else, I just use “Hey Siri” to launch the app.

On top of launching apps from the Watch’s other interfaces, I am also launching apps pretty rarely now. The Apple Watch works best when it notifies you something has happened and asks you how you would like to act on that event, not when you try to use it like an iPhone. I feel like if I find myself on the app screen, the Watch has failed me in some way. Either I don’t know how to activate something by voice/glance or there has been a software bug preventing me from getting where I want to go. I suspect that as Apple Watch develops over the coming years, you will have fewer and fewer reasons to delve into the messy “home screen.”

What Apple calls the home screen has only mild impact on users, but the language they use is important in understanding how they view the device. If they call the app screen the home screen, they expect you to use it a lot. I hope that internally Apple understands that the watch faces are much better “home screens” for this device and the app launcher is viewed as a secondary interface.

I mean, It wouldn’t hurt if they could make the app screen a little easier to use along the way, though.

Practice Makes Perfect No Matter How Big You Are

Is HoloLens Really Microsoft's Vision of the Future?

I watched some of Microsoft’s BUILD keynote today and saw…