Apple’s HomePod looks like a “hobby” device built for a niche, not a mainstream hit

It’s pretty clear we need to get more information on the Apple HomePod before we actually understand it as a product. I tweeted about my concerns with the HomePod last night and got many, many responses on the matter. Some people agreed with my concerns, but the more vocal group I saw was more bullish on the HomePod and made the argument that the HomePod is not competing with the Amazon Echo or Google Home. I don’t buy this argument and I’m also a little concerned with the HomePod’s reach if it is indeed just a nice speaker.

First off, let’s just say right up front that Apple pitched the HomePod as a product that gives you the features of a smart speaker like the Google Home or Amazon Echo in their presentation, so it’s misleading to suggest Apple is not competing with those devices. This is a smart speaker that makes its differentiator the overall music experience. 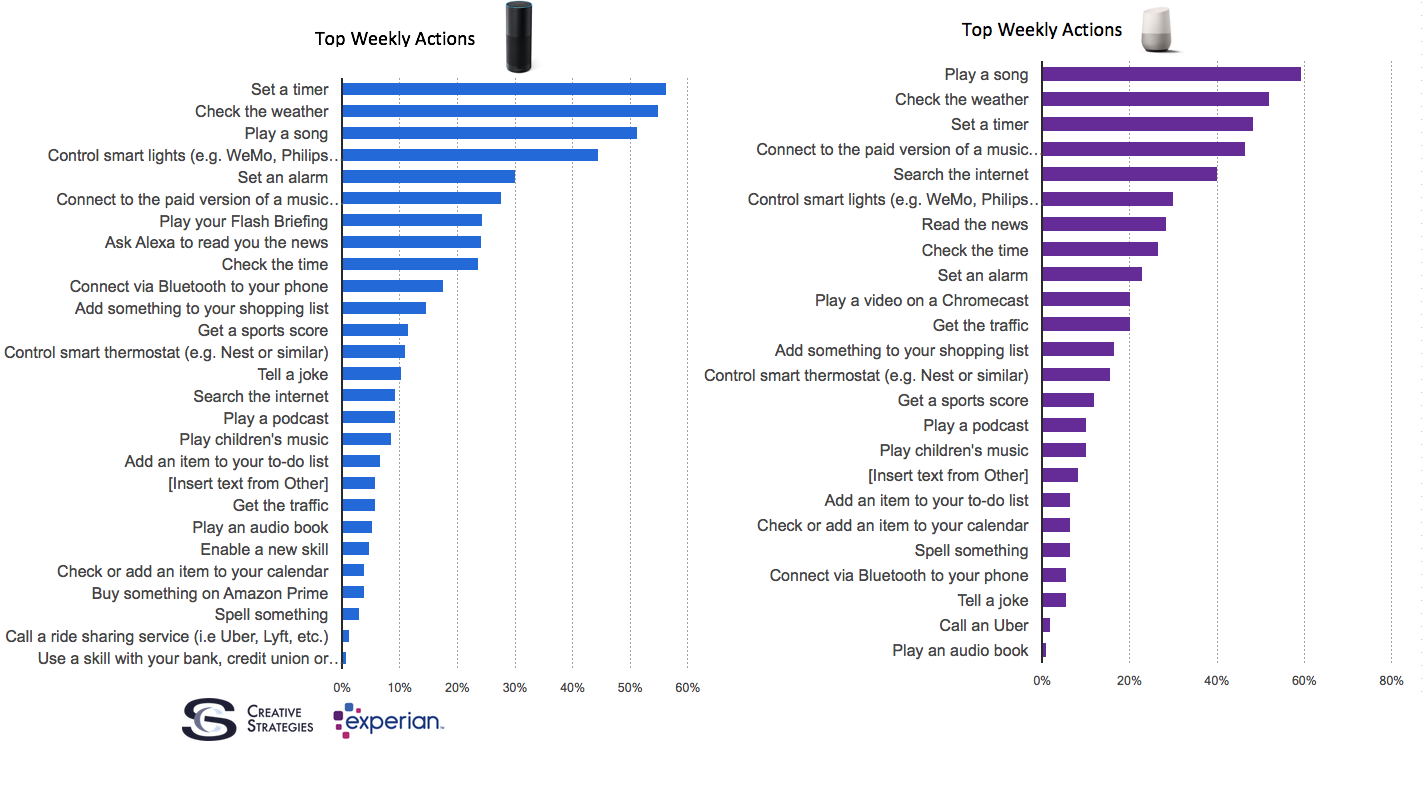 Above is a chart from Ben Bajarin that shows how people use their Echo/Home today. “Play a song” is #1 for the Google Home and #3 for the Amazon Echo, so Apple’s music focus seems to align well with what people use these speakers for. Additionally, the HomePod does appear to be able to do most of the top 10 things the Echo and Home are used for already. Compare that chart to the parts of Siri Apple said are coming to the HomePod:

That’s pretty on point, actually. The question of whether Siri is as good at these things as Assistant or Alexa is yet to be determined, but if it’s just as good, I think that puts the HomePod in good shape to do the things people expect from a smart speaker1.

So if the HomePod has similar smart speaker functionality to the existing players on the market, why am I concerned? I’m concerned because the $349 price point puts the HomePod way a the top of the smart speaker market. And it’s not by just a bit, it’s by an order of magnitude. Google Home Minis and Amazon Echo Dots were flying off the shelves this Black Friday at $30 a piece. These speakers don’t sound great, but they do everything the more expensive Homes and Echos do, so they’re functionally quite useful. At over 10x the price, the HomePod requires consumers to care a whole hell of a lot about sound quality.

It's hard to get good data on the high end speaker market, as the major players relevant to this conversation are Sonos and Bose, both private companies. Sonos seems to be doing okay, as Sonos's president said the company's sales were up 20% as of early 2017, although they have had some troubles as they missed projections in 2015, went through a round of layoffs in 2016, and had their co-founder/CEO resign in January 2017. Bose is even harder to look at as a barometer since they are also a private company and they sell a larger array of products so it's basically impossible to pin down their Bluetooth speaker sales.

I can say anecdotally that people I know who used to be into getting high end speakers for their homes are showing less interest in that space than they used to. Also looking at the Black Friday ads this past week, The Echo and Google Home were prominently displayed at every store's advertising, and Sonos and Bose were basically non-existent. None of this is hard evidence, but it's what I've seen and it doesn't feel like the high end speaker market is a good growth area right now.

Apple is surely going to do a better job of marketing the HomePod than Sonos has done with their speakers, but I’m still skeptical of their ability to make people care that much about incredible sound quality. There is certainly a niche out there that will love this and will eat it up, but I worry that’s a very small market. Sonos brings in about $60 million per quarter, which is scraps compared to any of Apple’s other products (Apple’s “other” category brings in $60 million every 2 days2). Even if Apple can grow this market, I don’t know how much space there is to expand in this price range.

If Apple had a $99-199 HomePod coming to market as well I would be much more bullish on the product line. That would still make it a premium device in the smart speaker market, but it would also bring it close enough to the other devices that are flying off the shelves to make people consider upgrading. As it stands now, I’m concerned that $350 takes the HomePod out of the conversation for most people. Apple has tried this with the iPod Hi-Fi back in 2006 (which incidentally also cost $349) and the product crashed and burned and was discontinued just a year and a half after its release. I think the HomePod has a better story than the iPod Hi-Fi, but we’ll see if the market responds any better to it.

Finally there is the privacy angle, and Apple has a leg up here, but again I don’t think it matters much. Unlike Google and Amazon, Apple has little interest in collecting your data and storing it to make a profile that they can use for making their advertising model better. None of the smart speakers on the market listen to you at all times, as they require a trigger phrase (“OK Google”, “Hey Siri”, “Alexa”) to begin actively listening. Apple is better here than Google and Amazon, but again, looking at the market I wonder how much of a differentiator that is for them. 80% of all desktop web search goes through Google today and some surveys show people actually trust Google and Amazon more with their data than Apple. For all Apple has done to make privacy a focus, I wonder how much of that message is making it to the general public. This is not about which company is actually better with your privacy, it’s about whether people are getting that message and whether it will encourage them to pay a steep premium to get that extra privacy, and I’m not convinced it will.

None of the above is to say the HomePod will not be a good product. By all accounts, it appears to be a very good product and is something I would like to have in my home (but even I can’t legitimize the current price). My concern is more with the positioning of the product in the market and whether it will be a success for the company or not. I’m concerned that they’re relying too heavily on a small market that cares about sound quality to a point where they’re willing to pay $350 for a single speaker. I’m concerned that people are using these smart speakers to do a lot more than just listen to music, and to those people a $30 Echo or Google Home gets the job done, and a $130 model of each of those speakers is the luxury option, so $350 is way too high. I’m concerned that Apple’s privacy advantage is not a message getting to consumers at large and will not make people pay a premium for that privacy.

In short, I have a lot of concerns. Maybe these concerns are unfounded and the HomePod will prove to be so good at the things I is built to do best that people will flock to it in droves, but that will surprise me more than if the HomePod does mildly well and only takes off when they can get a second version in the line up at a more mainstream price point. Right now the HomePod looks like a “hobby” device that will appeal to a small niche of user, and won’t be a serious part of Apple’s lineup (and revenue) until they have something $199 or lower.

My thanks to MDM Deals for sponsoring BirchTree this week! MDM Deals helps you find fantastic deals on fantastic apps & movies. As a particularly fantastic deal, Screens VNC is on sale for $14.99.

Note: It is a bit odd to propose an expansion to a…