One of the big reasons I got a Pixel 2 this year is because of the camera. I already own an iPhone 8 Plus, which has a truly spectacular camera, but the Pixel 2 is supposed to be no slouch either. Let’s take a look at a few comparison shots I took over my walks around the neighborhood this past week.

All images you see below have been scaled down to 1600x1200 so the post will not crash your browser, but if you want to download the full res versions of every photo featured in this post, you can do that here (147MB ZIP).

For each pair of images, the iPhone is first and the Pixel is second. This is a good starting image since it shows the difference in saturation between these 2 cameras. Look at the leaves on the, well everywhere, and the red in the fire hydrant. The iPhone defaults to a slightly higher saturation setting than the Pixel. I like this choice, but your preference may be for the flatter Pixel image.

Detail in this shot is basically the same. This is a good test of each camera’s HDR mode. I like the stylish look of the Pixel image, but the iPhone definitely retains more color in the tree and the darker parts of the yard/house across the street. The Pixel really crushes the blacks here. More of the same here. The Pixel creates an overall darker shot here, with the dark really dipping down too low. This was a sunny day, and the way the Pixel balanced this shot makes it looks like a cloudy day. The iPhone shot definitely has the sun totally blown out more than the Pixel, but that’s really the only place I think the Pixel wins on this shot. In my last high contrast shot we kind of see the same things again. The Pixel is crushing the shadows while the iPhone is maintaining the colors much better. When I zoom in on the leaves in the distance, the Pixel does a slightly better job of maintaining clarity. But the iPhone does slightly better marinating the light colors in the shot. Look at the sky, the iPhone shows a bit of texture in the clouds, but the Pixel loses them. The iPhone should destroy the Pixel in this shot, but it’s actually closer than I expected. The Pixel looks just as crisp as the iPhone, but the iPhone once again has much more color in the shot. The leaves on the tree look red and green in the iPhone shot, but the Pixel makes it look like a dying tree. the leaves are a deep red and almost black. Looking at the pine trees in the background are even worse. These trees look completely black in the Pixel shot.

Selfie During the Day 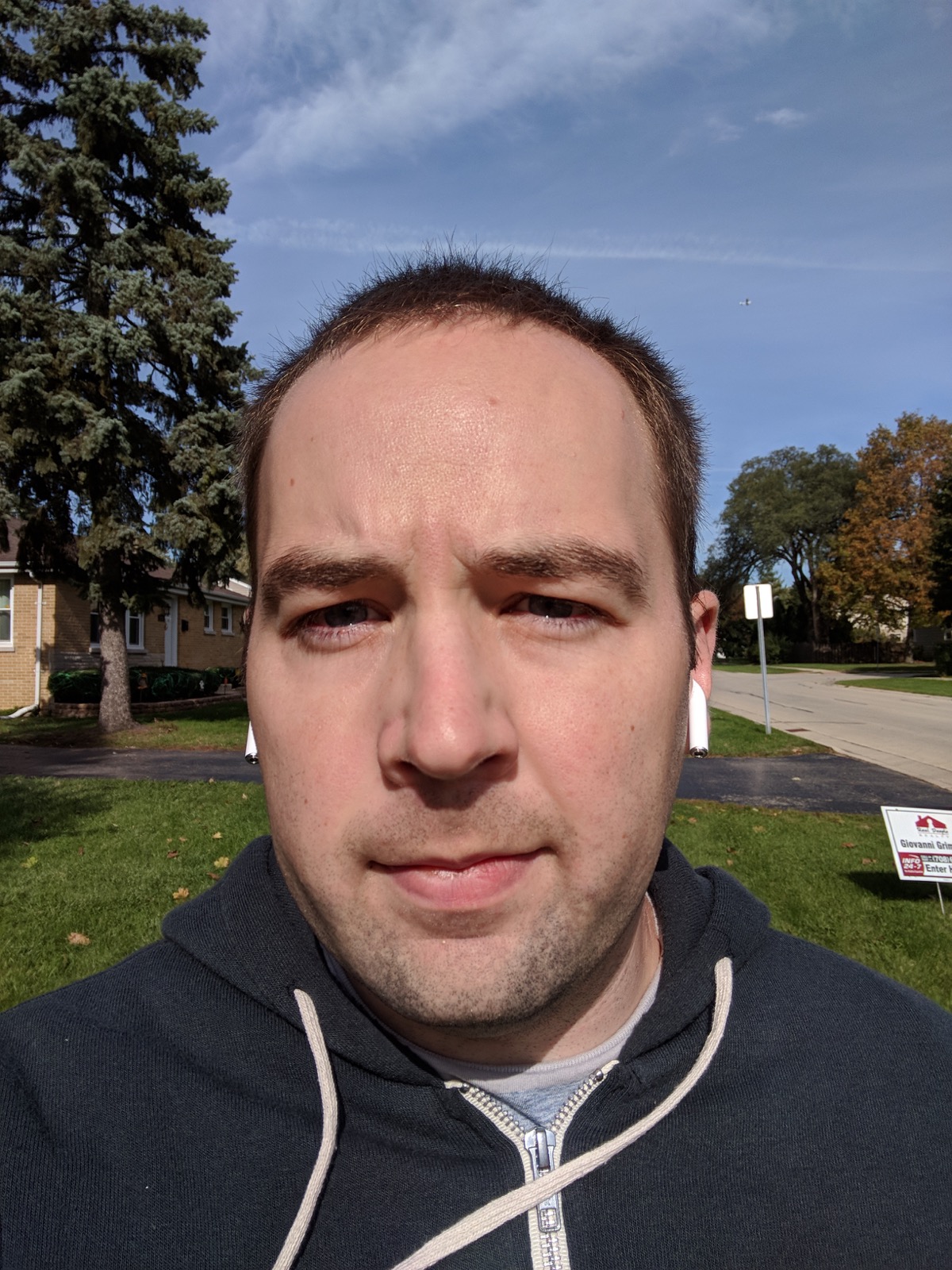 Selfies are a huge part of cameras these days, and both these phones have pretty darn good selfie shooters. Note that the Pixel has a wider angle lens on its selfie camera, so I held the Pixel a little closer to my face on these shots to get a similar composition. I personally like the Pixel’s wider angle, but we’re not looking at that part in these 2 selfies.

Both of these shots are really good in my opinion. I think I prefer the colors on the iPhone shot, but the Pixel does a much better job of capturing details in my face. The Pixel also has much more clarity in the grass behind me.

Selfie at Night (with Flash) This was taken in my living room with all the lights turned off and TV on, so basically all light is from the flash on the cameras. In this case I much prefer the iPhone image. The iPhone is much crisper and the “slow sync” feature on the iPhone makes this flash photo look much more natural. 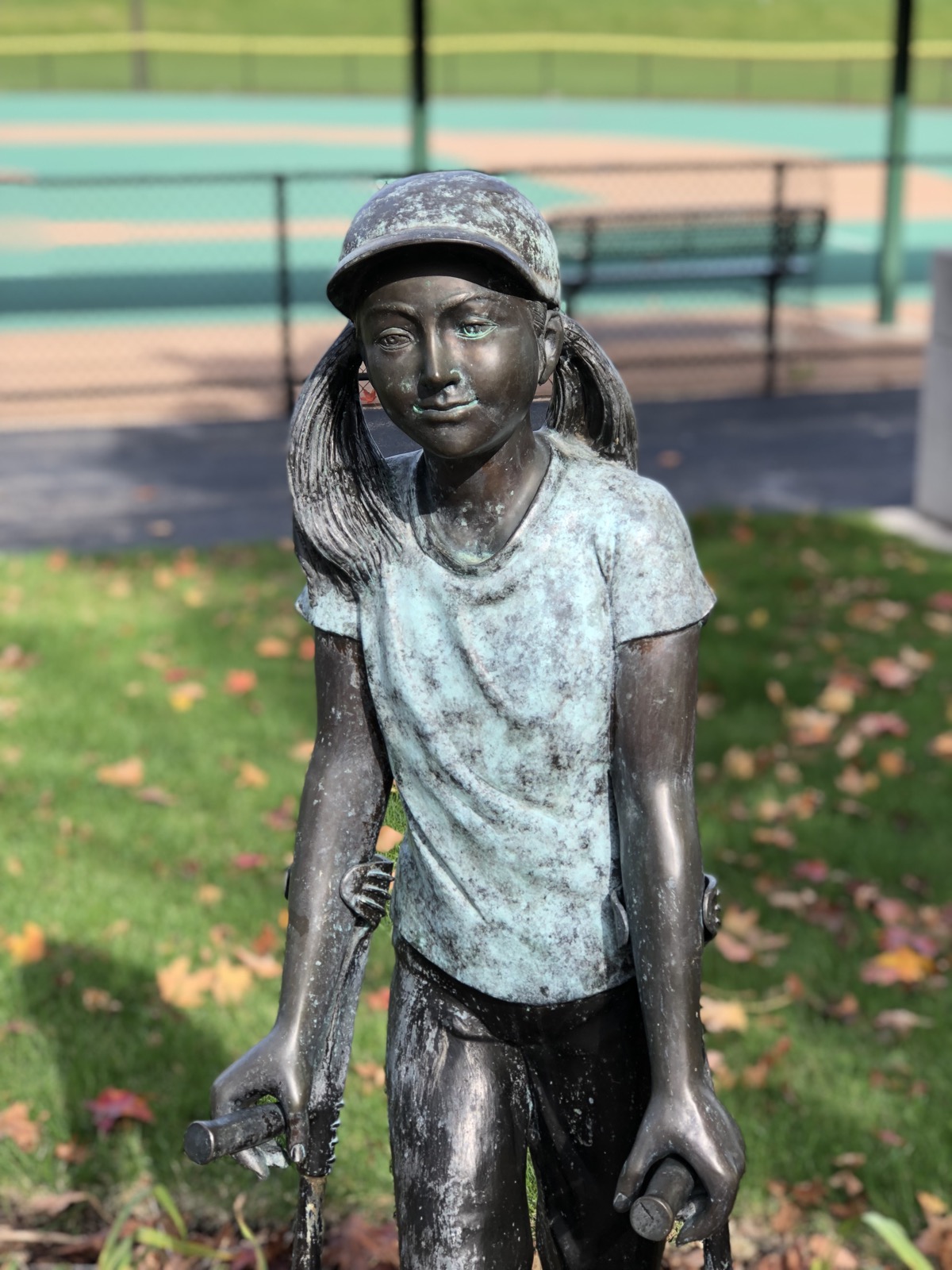 Now we get into a slightly controversial area: portrait mode. This statue near my work is a great subject for testing portrait modes. It’s a human image which both modes really prefer, it’s a statue so it is always the same, and it has numerous gaps that can be hard for portrait modes to recognize as background.

At first glance, both cameras did pretty well, but looking at the details, the iPhone comes out ahead on this. The blur is a little more realistic to my eyes than the Pixel’s overdone blur on this shot. Looking at the edges of the statue, the iPhone fails at the top with a little fence coming through, as well as failing to recognize the gaps under her hair and a bit under her right arm as part of the background.

The Pixel holds it’s own here, but the errors are more substantial. It does better around the top of the head, but it also misses the gaps under the hair. And while it does understand the space under the right arm is in the background, it misses a good portion of the right crutch. Also its edges around the left ponytail and arms are much more fuzzy than the crisper lines on the iPhone shot. 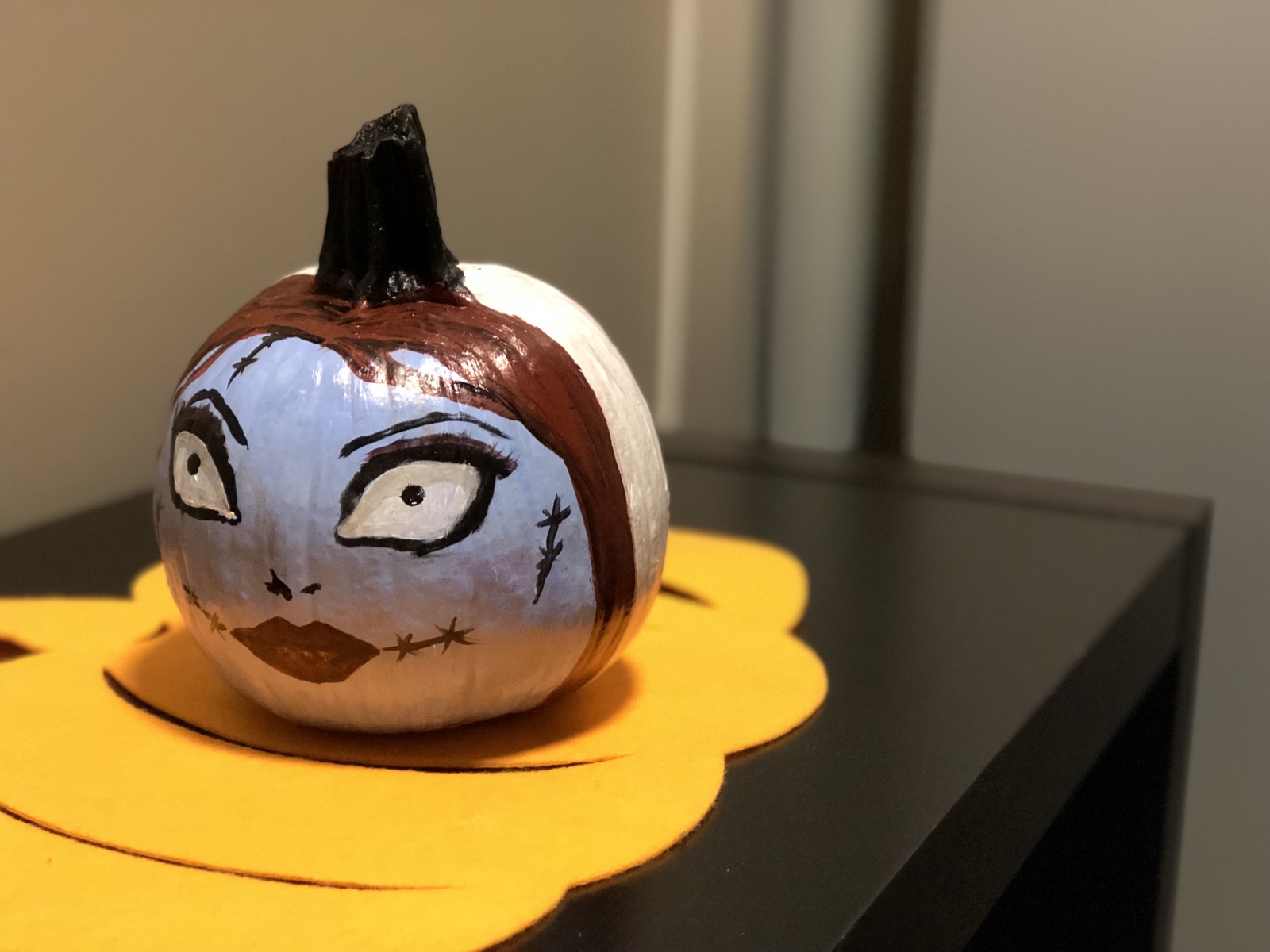 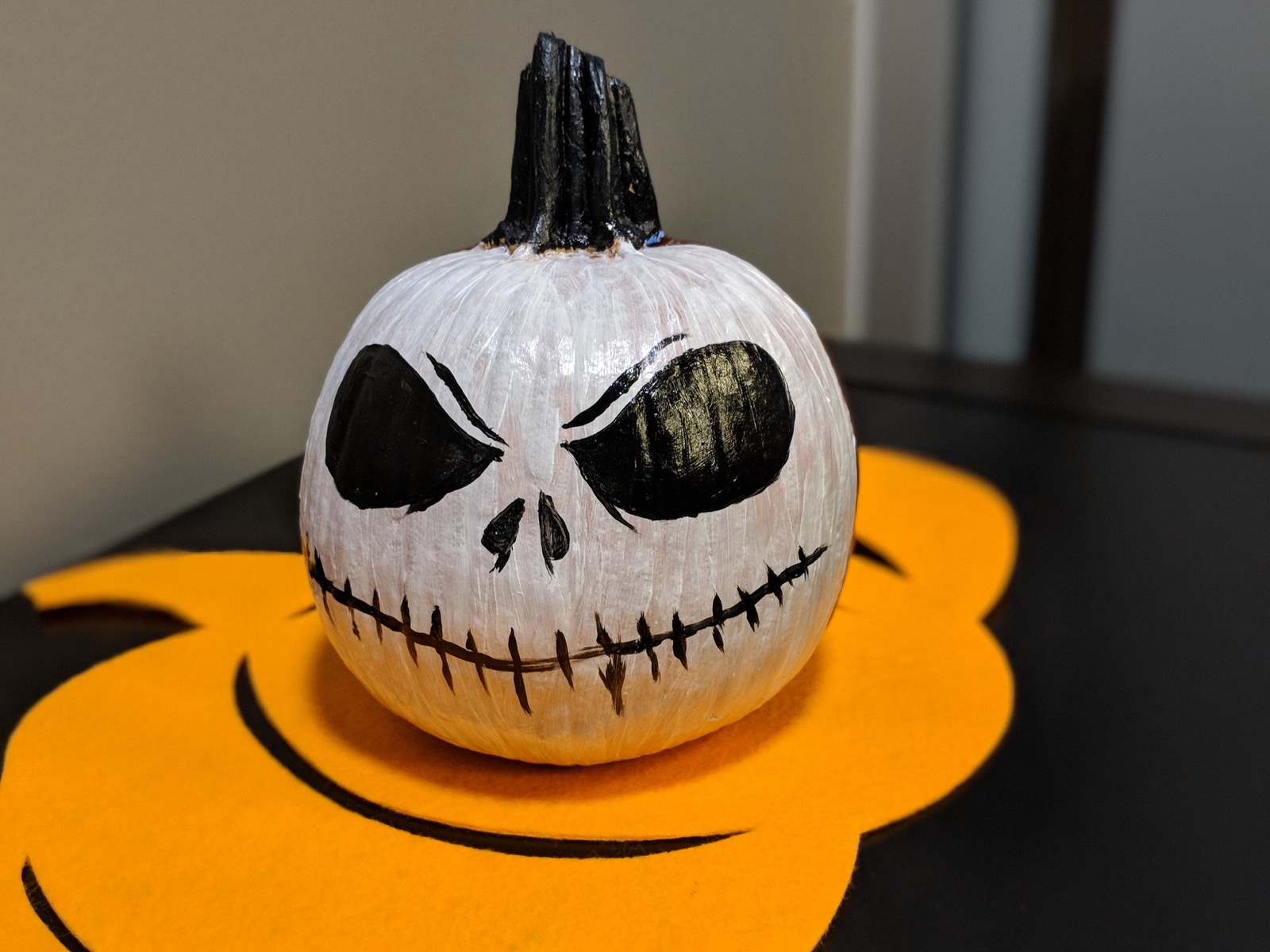 I’ll be the first to admit this isn’t a perfect comparison, as I got the angles a little off, but it still shows some good data. I’d give the edge to the Pixel on this one. The edges around the pumpkin are on point, and the detain in the pumpkin itself are very clear. The iPhone is very soft in this case. The iPhone has ever so slightly nicer, creamier blur effect, but I’ll take the Pixel shot here overall. The above image is from the Pixel 2 when trying to capture a small, moving subject. It’s a hard fail and the only reason I’m showing it here is to illustrate the “failure mode” of the Pixel 2’s portrait mode. The iPhone 7/8 Plus will sometimes fail to get a portrait shot, but their hard failure mode is to just take a photo without any blur applied. The Pixel will always try to blur something out, even if it can’t figure out what the hell is the foreground and what is the background. In this case, I really don’t know what the Pixel was trying to focus on, but it certainly wasn’t the little ghost.

The default behavior is for the camera app to save an image with blur and one without, and you should definitely keep this feature on so these hard failures don’t ruin your shot.

The Pixel 2 Camera Gets Some Really Cool Shots

Both of these are from the Pixel 2. 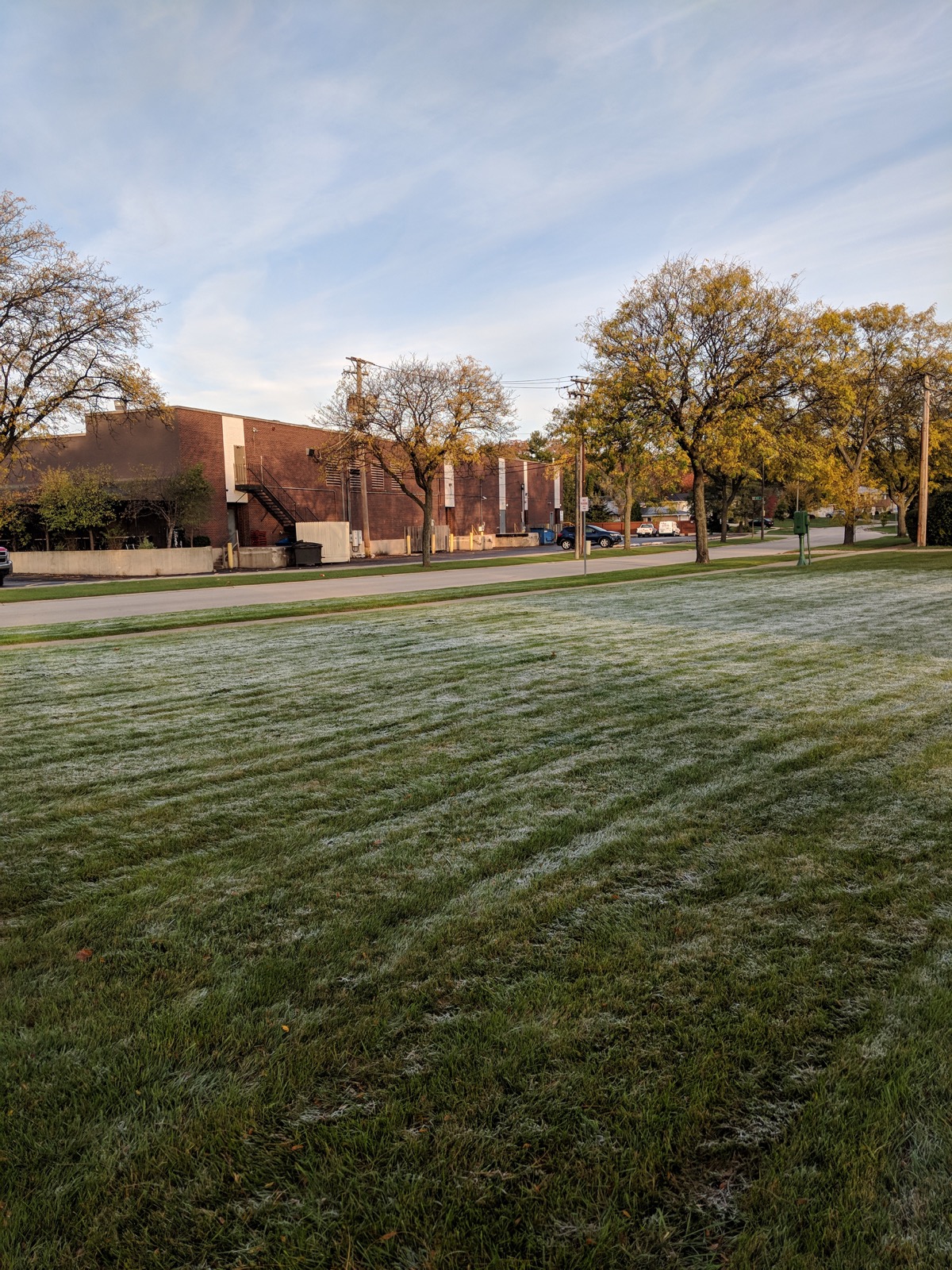 I’m going to post more Pixel 2 shots over the coming weeks and I’m really impressed with a lot of the photos coming out of this thing. That train tracks photo looks stunning, and I’m so happy the Pixel 2 got it for me with zero effort on my part.

It’s too soon to say which camera is better overall, but in these test shots, I think the iPhone has the edge. I did not test everything yet, and there surely are situations where the Pixel is going to beat the iPhone, but in my honest attempt to compare them fairly, I think the iPhone 8 Plus came out on top.

What do you think? This isn’t a holy war, and I am totally open to opposing opinions, so let me know on Twitter and we can have a conversation!

Web benchmarks for the Google Pixel 2

Benchmarks are either the most fair way to compare devices, or they’…