Have iPhones Been Getting More Expensive?

Only one part of this is simple: iPhones have gotten more expensive on the high end. When the iPhone 6 Plus came out, you could max it out and get up to $949. Today, you can max out an iPhone 11 Pro Max and pay $1,449. Even adjusting for inflation, that’s 40% more money. If you want the biggest, baddest iPhone money can buy, you can throw more money at an iPhone in 2019 than ever before.

But let’s not talk about the most expensive iPhone, let’s look at the “mainstream” iPhone. Of course, all iPhones are mainstream, but each year there is a “default” iPhone that most people buy. It was always the small one until last year when the XR took the mainstream title.

In the interest of full clarity, these are the phone’s I’m counting for this comparison1:

Here are the prices for those phones (all with the base storage) when they released: 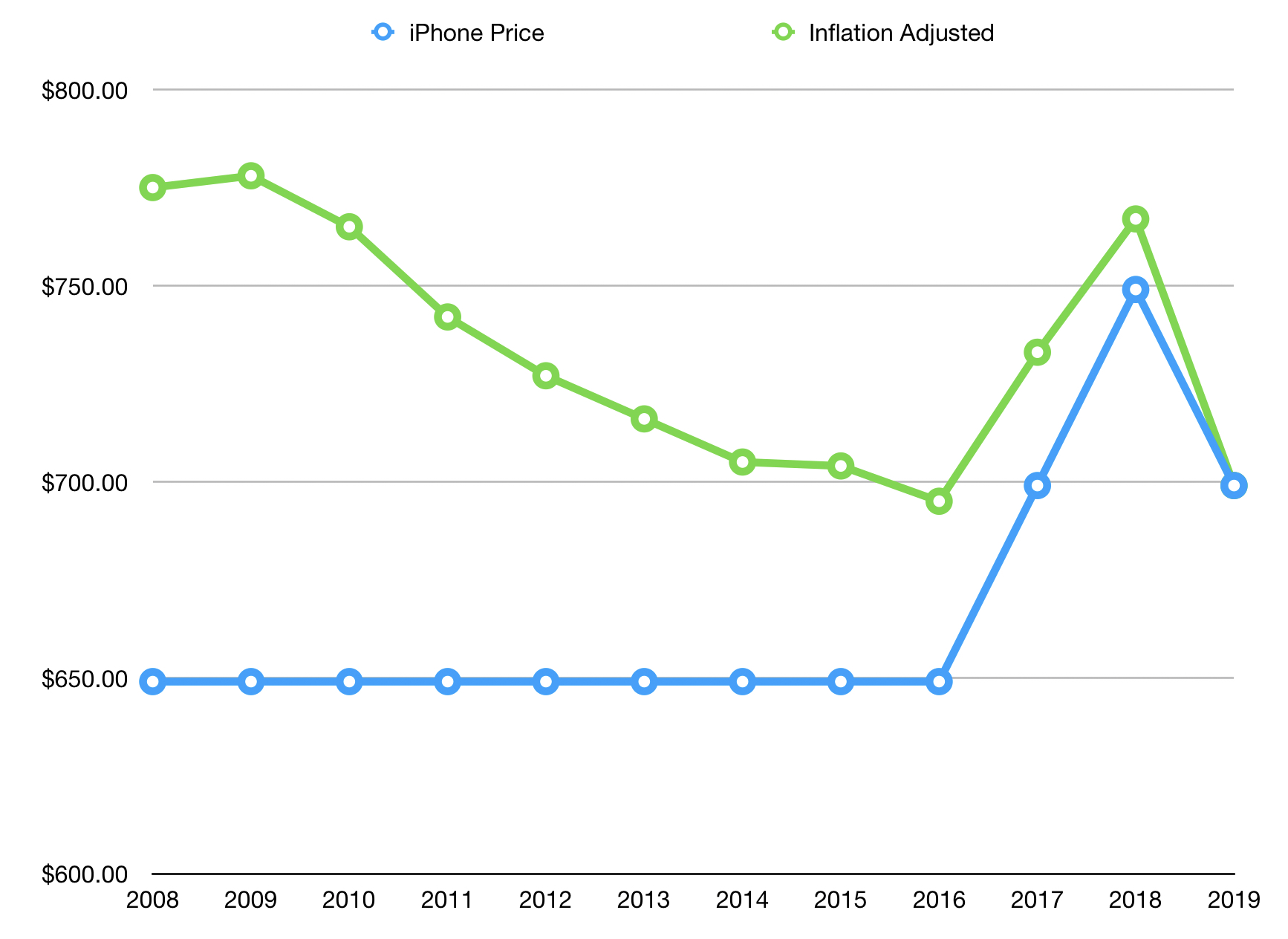 To the point many will make, looking at the inflation-adjusted price, iPhones were getting less expensive basically every year, even if the sticker price stayed the same. Even at the highest entry price of $749 with the XR, it was still technically less expensive than the iPhone 3G.

But it still feels like iPhones are getting more expensive, so I looked at average wages over the same time period. 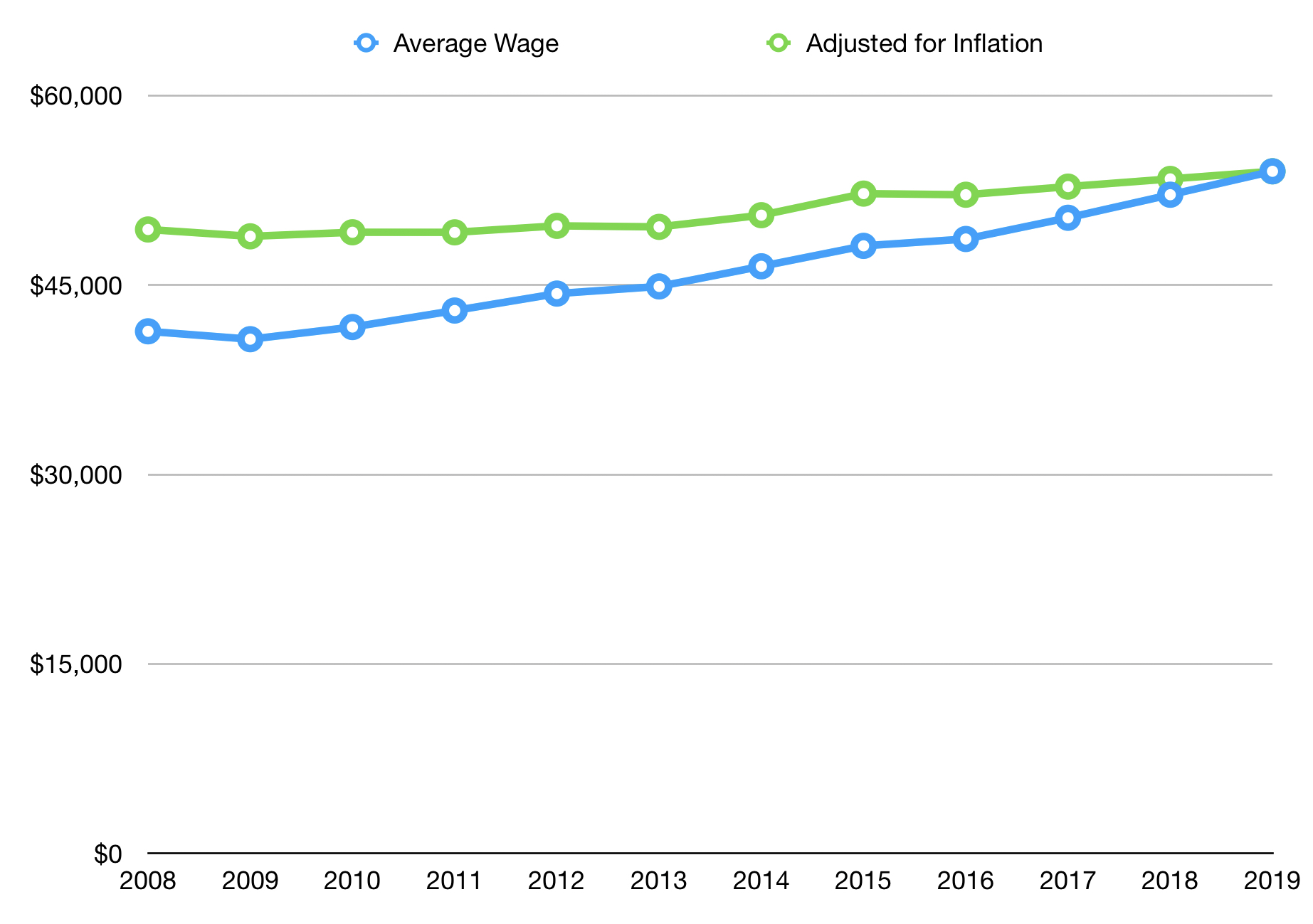 Well, that doesn’t changing the result at all. While the inflation-adjusted price of iPhones goes slightly down, the average wage in the US is slightly outpacing inflation.

We can combine these together to find how much of the average worker’s salary would go towards the iPhone that year. 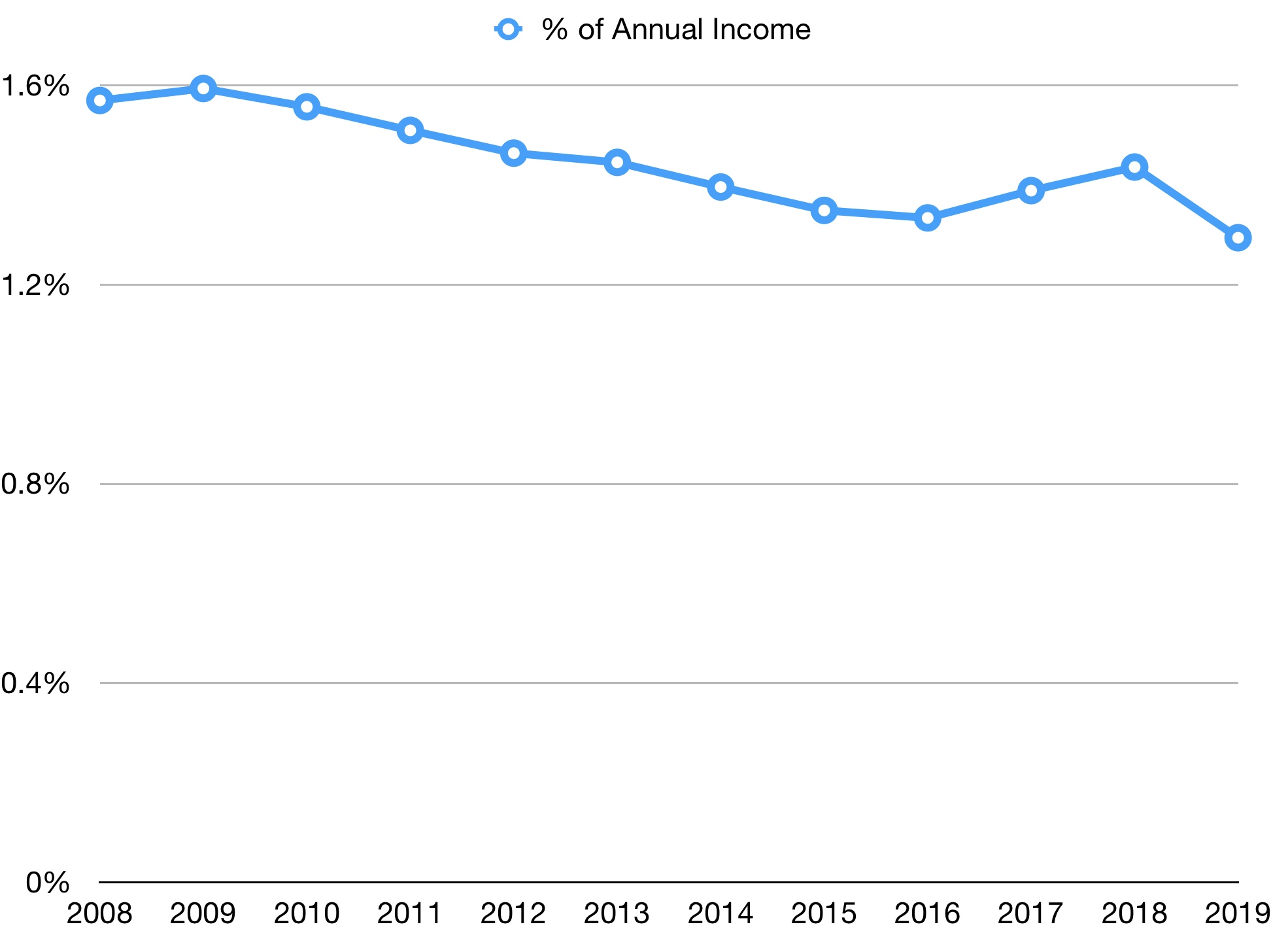 Well hell, that doesn’t show them getting more expensive either.

So basically, iPhone prices have grown slower than the inflation rate and workers are making more money each year, so an iPhone is a smaller portion of their income than ever before.

So why does it feel like iPhones are getting more expensive?

My theory is that we in the tech press and “Tech Twitter” no longer consider the lower end iPhone to be the “flagship” model. I’d say the shift happened with the iPhone 7, where the Plus model added a second camera. The next year saw the iPhone X outshine the iPhone 8 (in sales and attention), and the triple camera iPhone 11 Pro outshine the iPhone 11 (although the 11 is outselling the Pro this year).

Let’s take a look at prices when we consider the 7 Plus, X, XS, and 11 Pro instead of their cheaper counterparts: 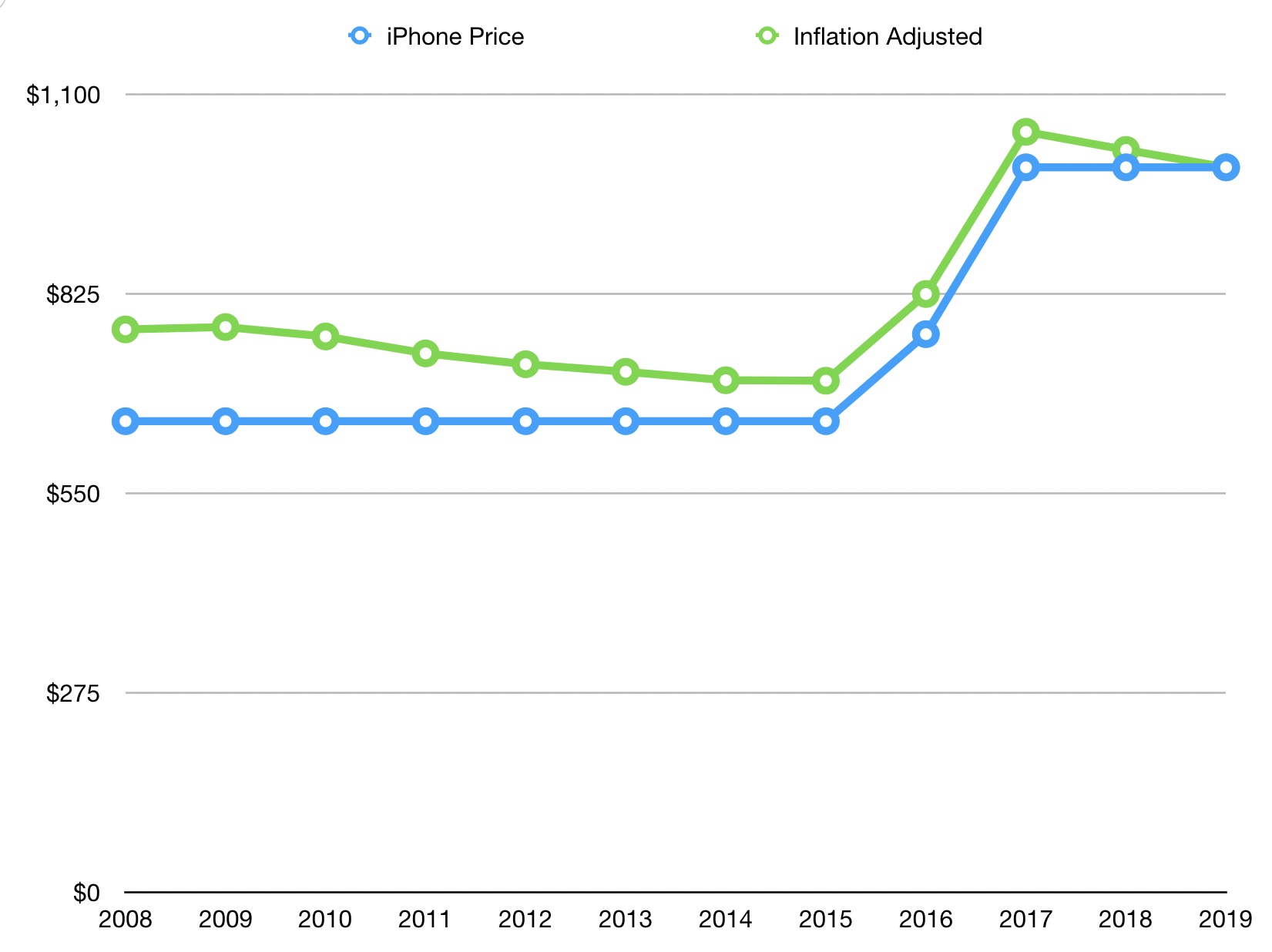 There we go, that’s a result! How about compared to average income? 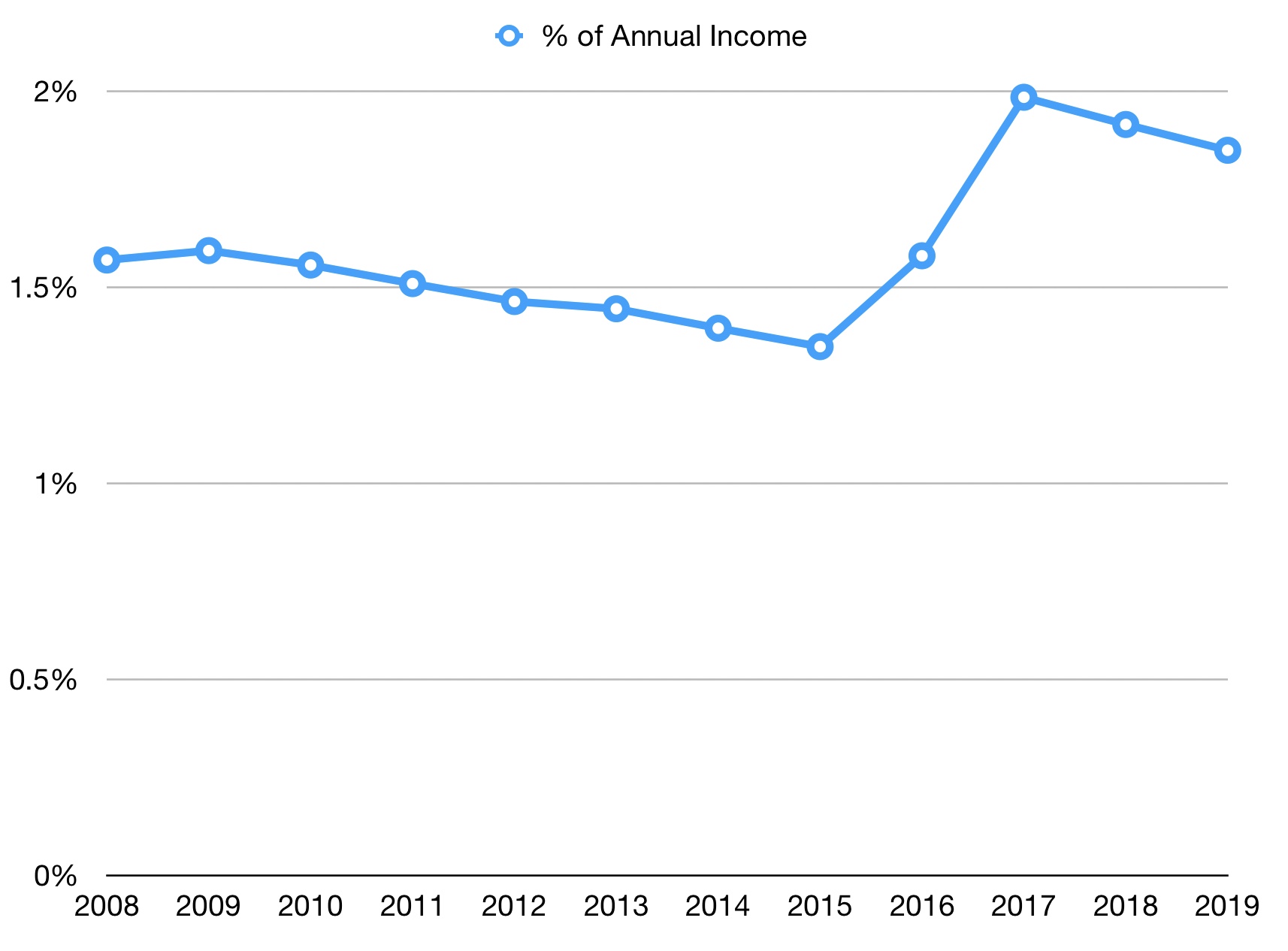 Ok, so if we consider the “main” iPhone to be the 7 Plus and then the X-style models, then prices have indeed risen in the past few years, outpacing both inflation and income increases. This may not be correct but it’s definitely how many people feel.

And finally, there is the fact that it wasn’t until recently that the actual cost of a phone was something most buyers even knew about. Most iPhones cost “$199 on contract” and they only paid that up front and considered that the whole cost of the phone. Looking at it this way is…wild. 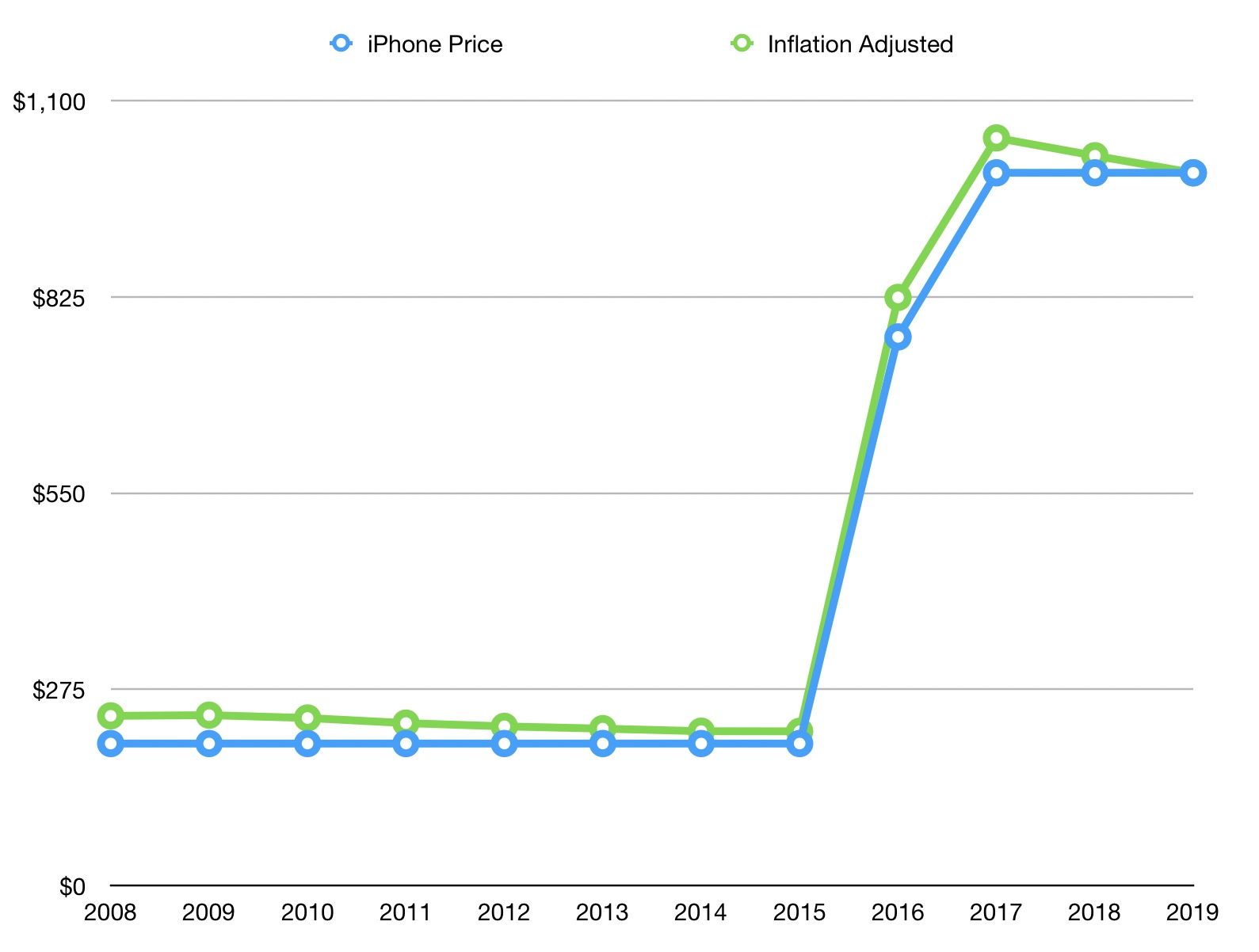 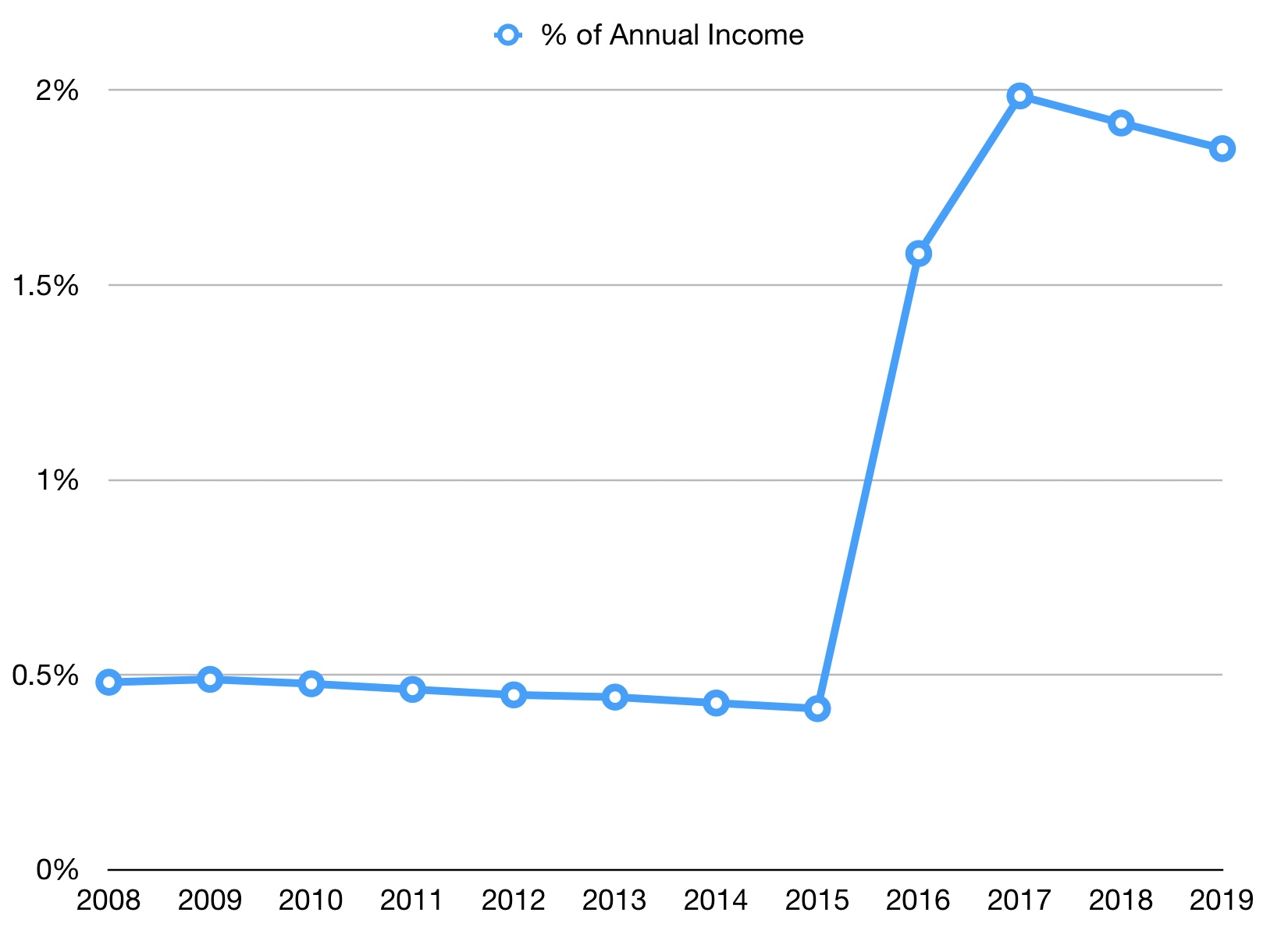 And this thread could continue down further into even more insane ways since often people today don’t get advertised the cost of the phone and are instead expected to view it as “$38 per month” which obscures the cost all over again.

Or how about that Apple is now advertising the cost per month AFTER a trade in of another phone???

I didn’t have a position I was trying to prove before writing this piece, I just plugged in the numbers and saw what they spit out. My moment of clarity was when I was on the third set of graphs and realized there were potentially a half dozen other ways I could look at iPhone pricing.

As the years have gone on, the iPhone line has gotten more complicated. The original iPhone came in one color and 2 storage sizes. The 2019 iPhone have 3 lines, 3 storage options each, and 10 total colors to choose from; that’s 42 total models. This makes comparisons harder and harder to make each year. What’s the mainstream iPhone? What’s the flagship iPhone? What’s the budget iPhone?

The answer to “are iPhones getting more expensive?” is not yes or no. It’s both, and that makes it so anyone can choose the chart that confirms their feelings.

Before I go, there is one more data point that is worth noting. iPhones last for quite a few years, and there is no reason people need to buy the latest and greatest iPhone. Outside of eBay and third party retailers, in 2018 you were able to buy an iPhone SE from Apple for $249. In 2019 you can buy an iPhone 8 for $449. Those are $208 and $375 in 2008 dollars respectively and that’s kinda nuts. It’s far cheaper to get into an iPhone than ever before, and that is pretty great.

The “First” to Move Past the App Paradigm

Above Avalon: AirPods Are Becoming a Platform [https://www.aboveavalon.com/notes/…