Just how fast is fast charging on the Google Pixel 2?

Google made a big deal of the fast charging times for the Pixel 2 and Pixel 2 XL, and my testing shows they were right to be proud of it. I recently tested 5 different ways to charge the iPhone 8 Plus and thought it only made sense to put the Pixel 2 up against those numbers to see how it stacks up to its competition. Without further ado, here’s the numbers: 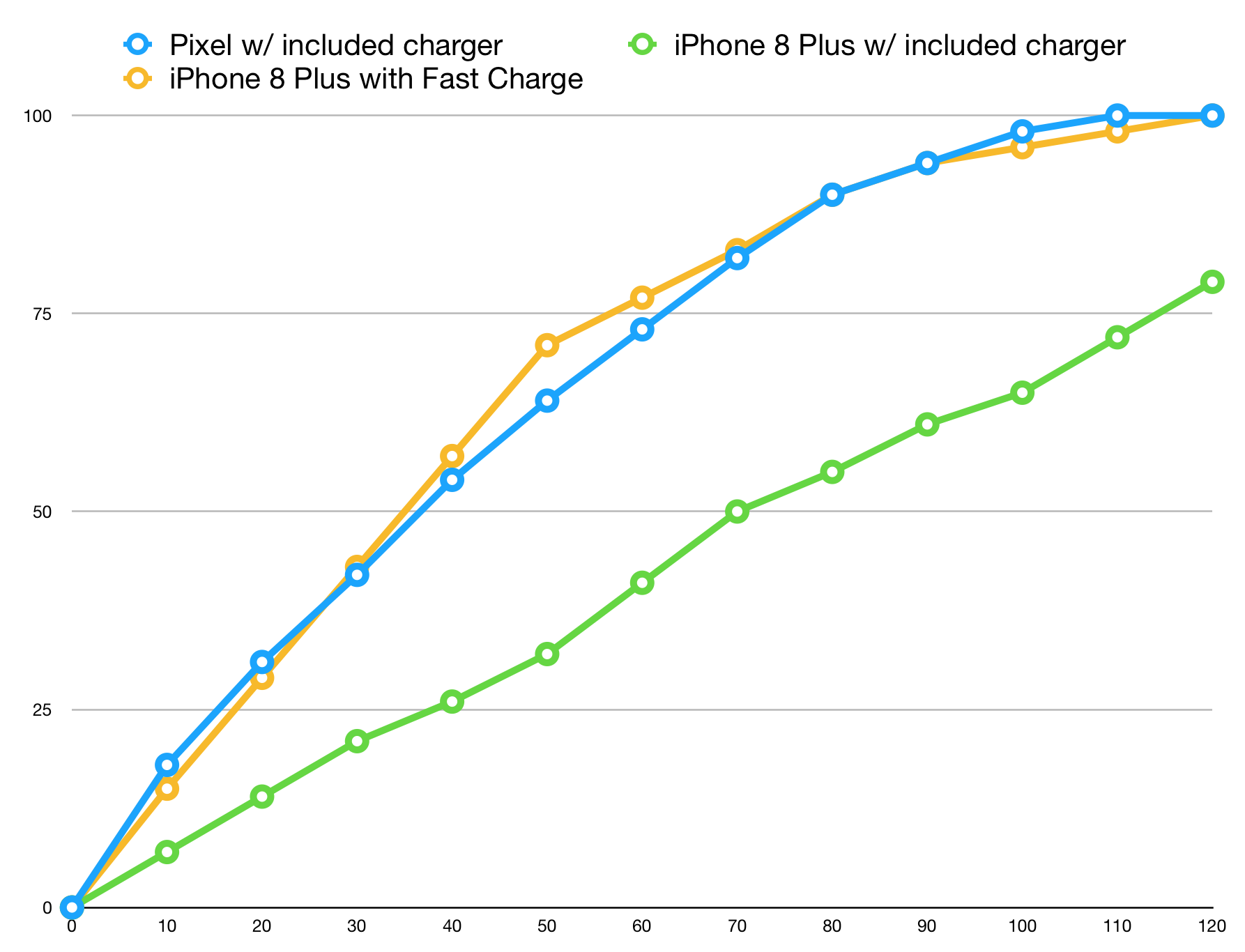 The Pixel charges incredibly fast, and eclipses all charging methods I tried with the iPhone 8 Plus. The Pixel is faster off the line, going from zero to 18% in 10 minutes and then getting to 31% in 20 minutes. The iPhone 8 Plus got to 15% and 29% at those same times. In the same ballpark, but the Pixel definitely wins.

The iPhone mysteriously picked up the pace after that and over took the Pixel from the 30 to 70 minute marks, but the Pixel pulled back into the lead and finished charging to 100% in about 100 minutes, a full 20 minutes before the iPhone 8 Plus completed its charge.

Now the iPhone really takes its foot off the gas when it gets to about 90% charge, which is actually good for battery health in the long run. It’s good that these batteries don’t charge at full speed up to 100% because it would be unsafe and we don’t want any more Note 7 incidents…

The real battle is who can get to 80 or 90 fastest, and in those cases, the phones are basically the same. I don’t even feel like I can declare a winner because they’re totally neck and neck the entire way. Yeah, the Pixel is a little faster off the line, but it’s 20% faster in the first 10 minutes. But looking at the first 50 minutes shows the iPhone 11% faster. And considering both phones hit 90% in exactly the same amount of time, I will call this one a wash.

The most important thing to notice here is that I’ve been talking about the iPhone attached to the 29W charging brick that does not come in the box with the iPhone. If you’re using the included charging brick, the Pixel is 157% faster in the first 10 minutes, and it maintains a healthy lead over the iPhone throughout the charging process.

If you want a phone that charges fast, I think you’re going to be happy with either the iPhone 8 or the Pixel 2. But if you want something that’s going to charge fast right out of the box, then the Pixel 2 has the iPhone beat by a mile.

Comparing video on the Pixel 2 and the iPhone 8 Plus