What’s the best way to charge your iPhone 8 Plus?

The iPhone 8 and 8 Plus brought more new ways to charge up than any iPhone before them. This year we got real fast charging with high watt power bricks as well as wireless1 charging via Qi-compatible charging pads. And of course all the traditional wired ways of charging still work.

I wanted to find out what the best way to charge my new iPhone 8 Plus was, so I dished out a few dollars “for science” and put them all to the test. Here’s what I tested:

I ran my phone down to 0% charge for each test2 and plugged each charger into the same wall socket. The phone was allowed to turn on and connect to WiFi and cellular networks, but it was never unlocked, and the screen was only turned on momentarily every 10 minutes to check the charge level. I did this for 2 hours each time and recorded each one. 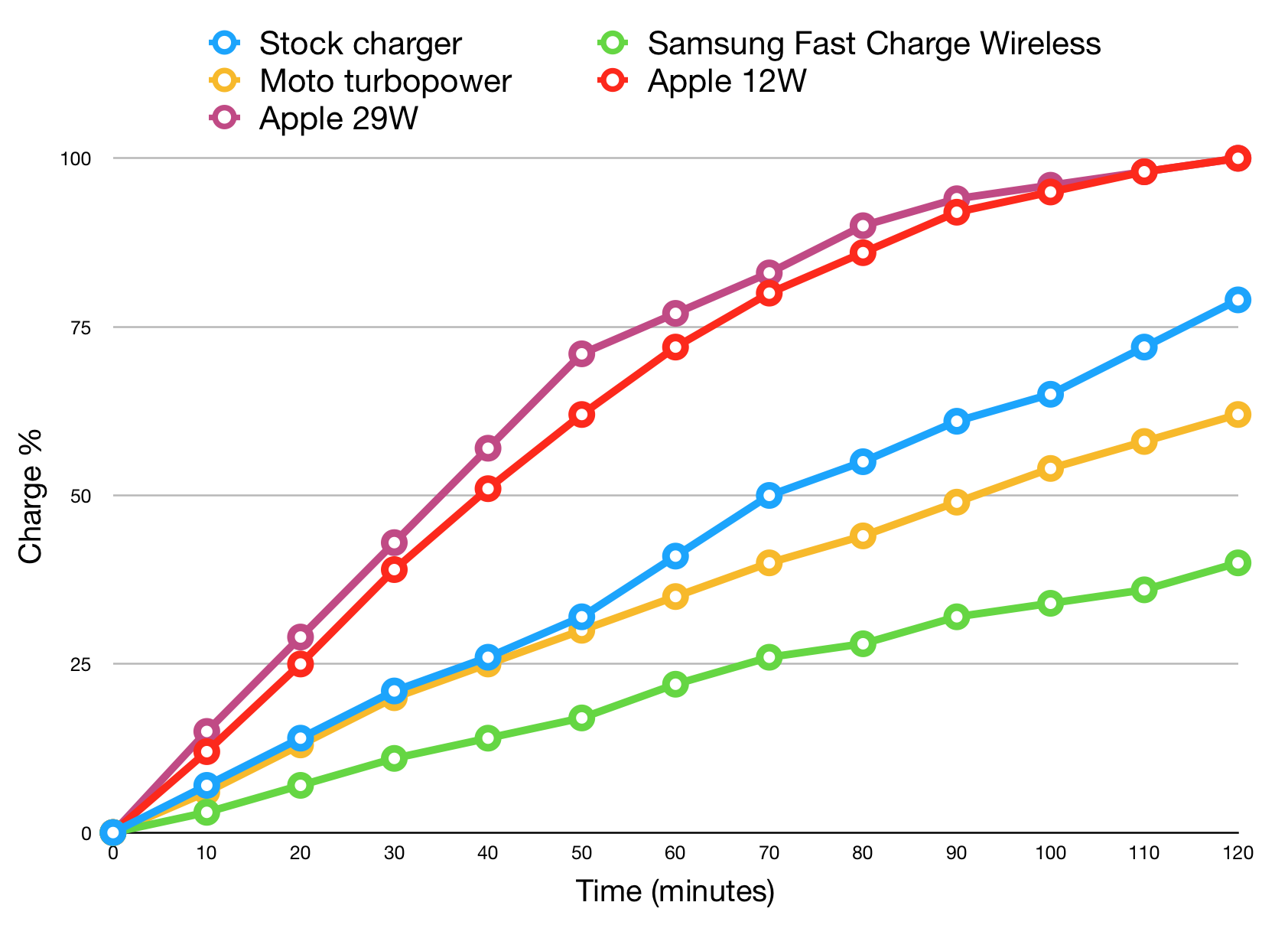 The 5 chargers fell into 3 general sections. There were the 29W and 12W Apple brick that took the lead, there were the 5W Apple and 15W Motorola bricks in the middle, and Samsung’s wireless charger was way below everyone else.

The 29W Apple charging brick paired with the USB-C-to-Lightning cable did the best of the bunch, achieving a 50% charge in about 35 minutes, but I was shocked to see just how close the 12W charger kept up. Yes, it was a little slower, but the difference was negligible throughout the test. This is great, because the 12W brick is only $19 from Apple instead of $49 for the 29W one3.

I was quite surprised by the Moto turbopower brink’s lack of competitiveness though. According to Motorola’s specs this brick will charge at 8W on standard devices and up to 15W on Qualcomm Quick Charge 2.0 compatible devices. I wasn’t expecting to get the full 15W out of this, but basic math tells me 8W is more than 5W (in the stock Apple brick) so I figured it would deliver some improvement. I don’t know whether Apple or Motorola are to blame for this, but if you have a fast charging brick like this already, I wouldn’t guarantee it will be as useful as you’d like.

And finally we have the Samsung wireless charging pad bringing up the rear. This one is frankly painfully slow. This thing charged my phone about 20% per hour, which is pretty miserable. After 2 hours it had only gotten my phone up to 40%, which the stock “slow” charger did in 60 minutes and the 29W fast charger did in 30 minutes.

Breaking down the 3 main options

I would expect the 3 most popular options most people use to charge their new iPhones are the stock charger that comes with the phone, the Apple-endorsed 29W fast charger, and a wireless charging pad like Samsung’s, which is relatively affordable and made by a well known brand name. 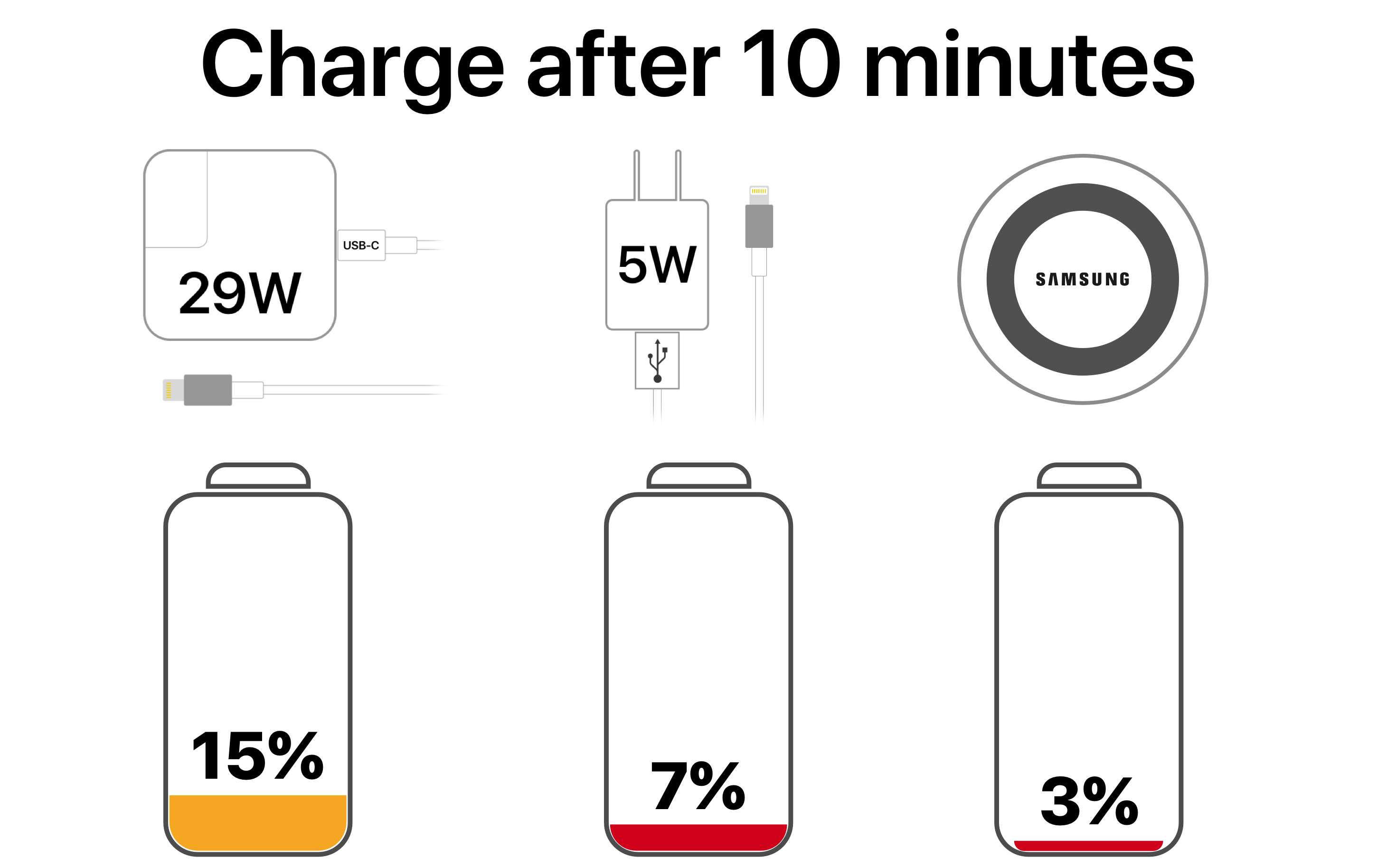 One of the appeals of fast charging is that you can get a big boost to your battery in very little time. You can “top up” you battery in a few minutes and get a meaningful amount of juice. I definitely saw a noticeable difference, as the fast charging option delivered 2x the power in a quick 10 minute charge than the stock charger. The wireless charger is not your friend here, as it only took my phone from 0% to 3% in 10 minutes. 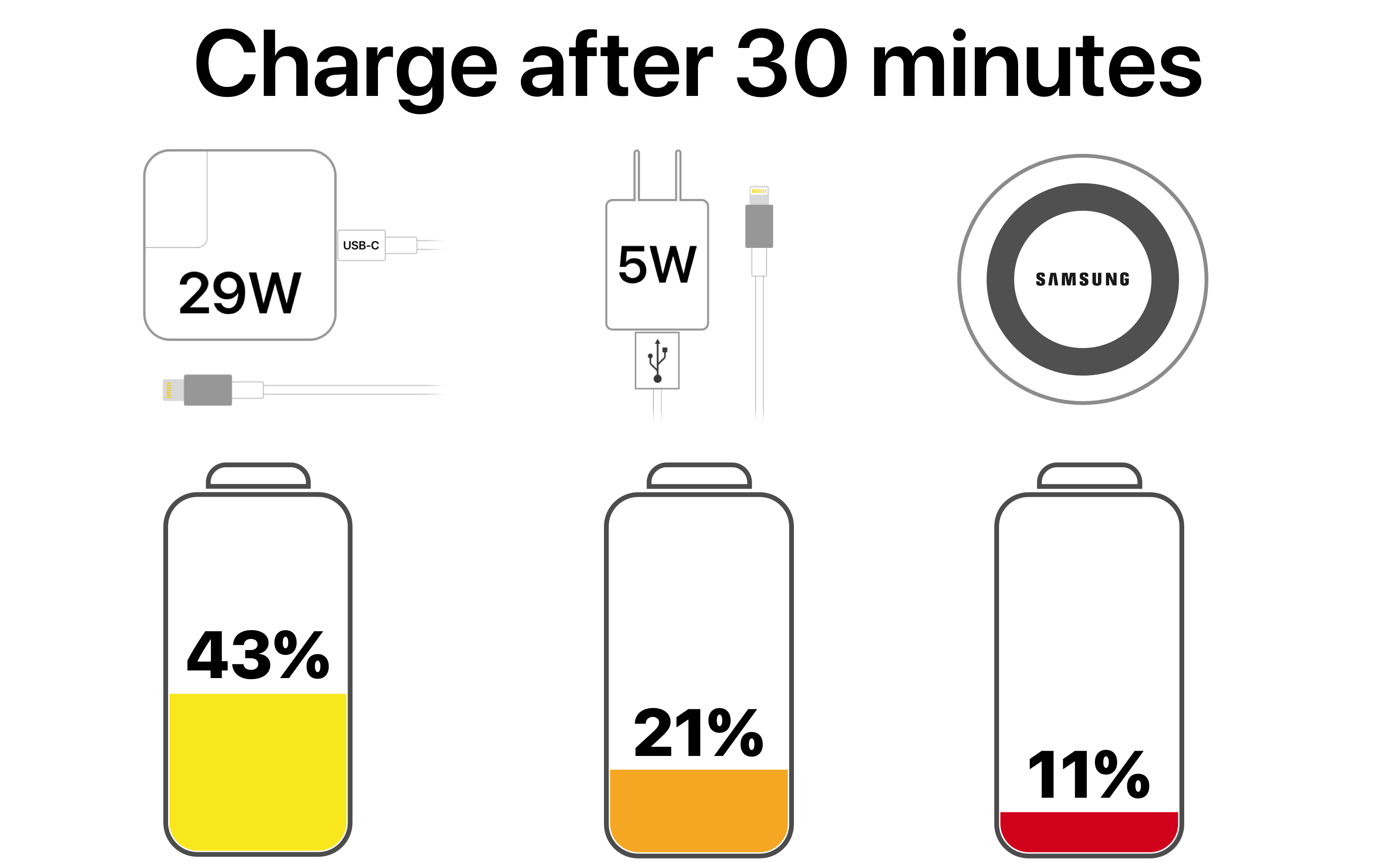 Leaving your phone on the charger for a little longer, your lunch break for example, amplifies these differences. The fast charger gets the iPhone all the way up to 43%, basically halfway charged again! Meanwhile the stock charger gets me to 21% and the wireless one still hasn’t gotten me out of the woods at only 11%. Ouch! 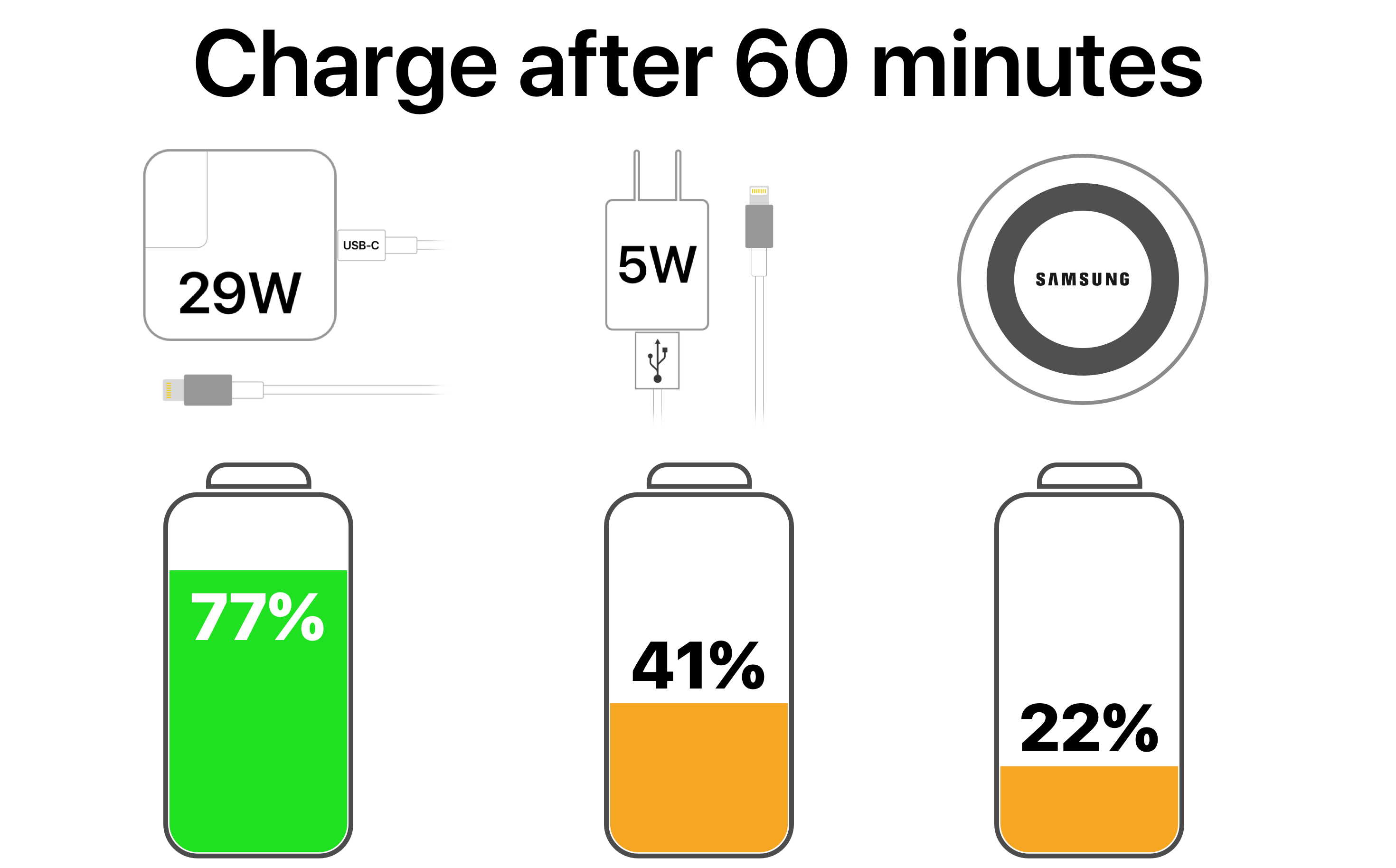 At the one hour mark the story is mostly the same. The fast charger is way in the lead. Proportionally the fast charger has lost a little ground, but that’s because it’s fulled the battery so much that it now has to slow down for the last quarter or so of the capacity. Again we have the wireless charger lagging way behind, still only half the charge of the stock iPhone charger.

I asked in the headline which option was best for charging your iPhone, and I think the best option is the Apple 12W charger with a standard USB-to-Lightning cable. The cable is free since it came with the phone, and if you own an iPad then you already have the charging brick. Even if you don’t have the brick yet, it’s only $19 which is not going to break the bank.

The ability to plug in and get over 1% per minute is fantastic, and the fact that this less expensive ($19 max) charging setup runs neck-and-neck with the official fast charging option ($49 for the brick + $19 for the cable) makes it a no-brainer for me.

Sadly the only wireless charging option I’ve tested did a very poor job of getting my phone back in good battery shape. I’m happy that the iPhone has wireless charging now, as I do enjoy using it more than physically plugging in my phone, but if I need to get power fast, I’m going with the cable for now.

Oh yeah, and make sure you check online to see if any other so-called “fast charge” options will actually charge the iPhone quickly. The Moto turbocharge does not get my recommendation.

Nobody wants to be first (revisiting “courage”)

How much extra space does the iPhone X’s screen get you?