My wife tells me I have a keyboard problem. You know what, she’s probably right, as I have more keyboards than I really need, but I’m always on the look out for the perfect solution for me. In light of this, here are all the current keyboards I own with basically tweet-length reviews for each. 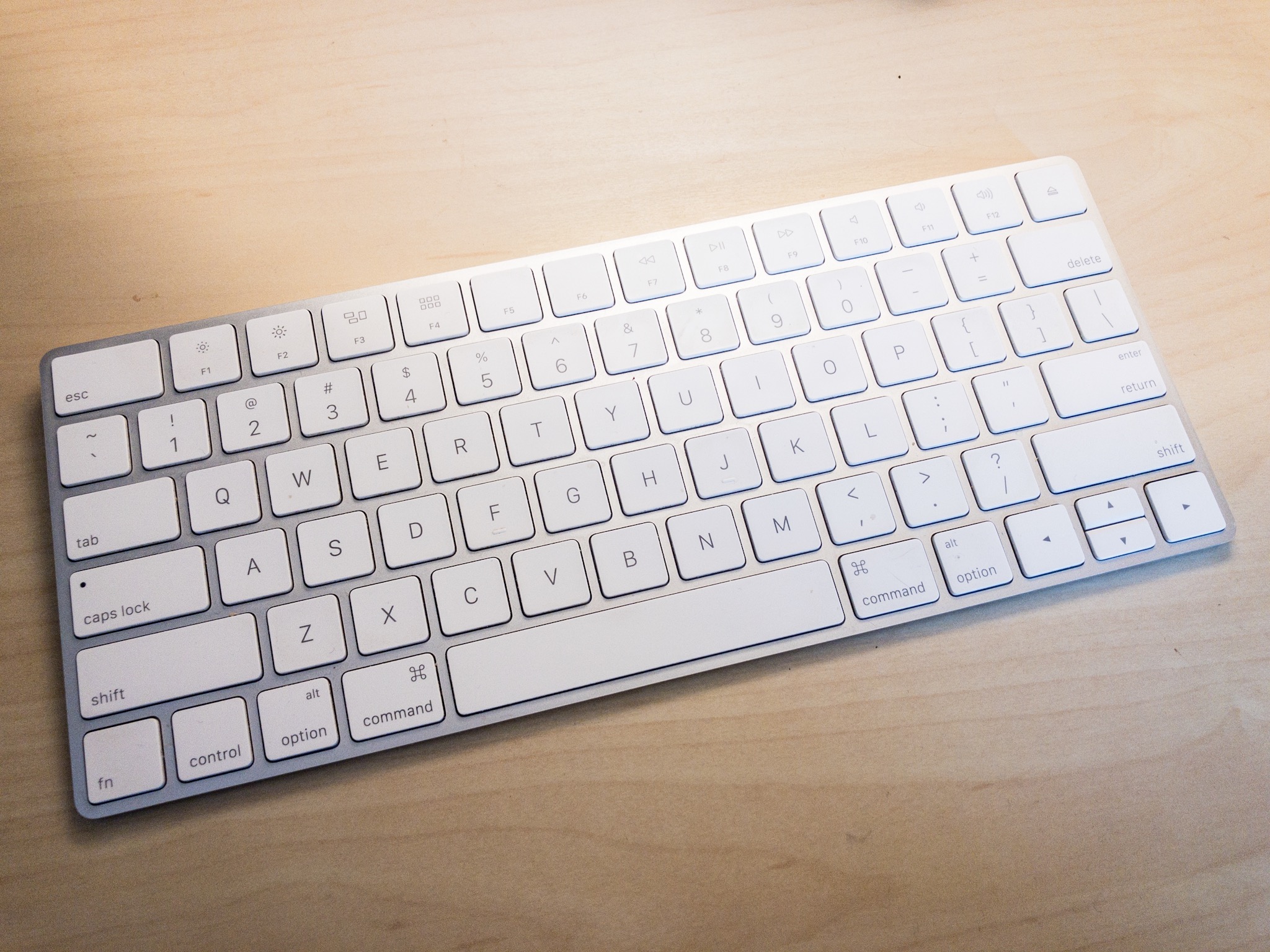 This is my favorite all time keyboard. The key travel is less than most, but feels perfect to my fingers. The clicks when typing are perfectly satisfying, and the butterfly switches that are such a problem on the current MacBook Pros work wonderfully here.

I don’t love the arrow key sizing, as the up/down arrows are just a little small and sometimes lead to me hitting the wrong one. But the rest of the layout is very comfortable.

The sleek look is fantastic, pairing with a Mac is as simple as plugging it into the computer via a Lightning cable (this also does the Bluetooth pairing, so you never need to go to the Bluetooth settings screen), and I’ve never had issues with the wireless connection dropping or lagging like I have had with other keyboards.

I used this for about 6 months with my PC at work and it was a champ there too. 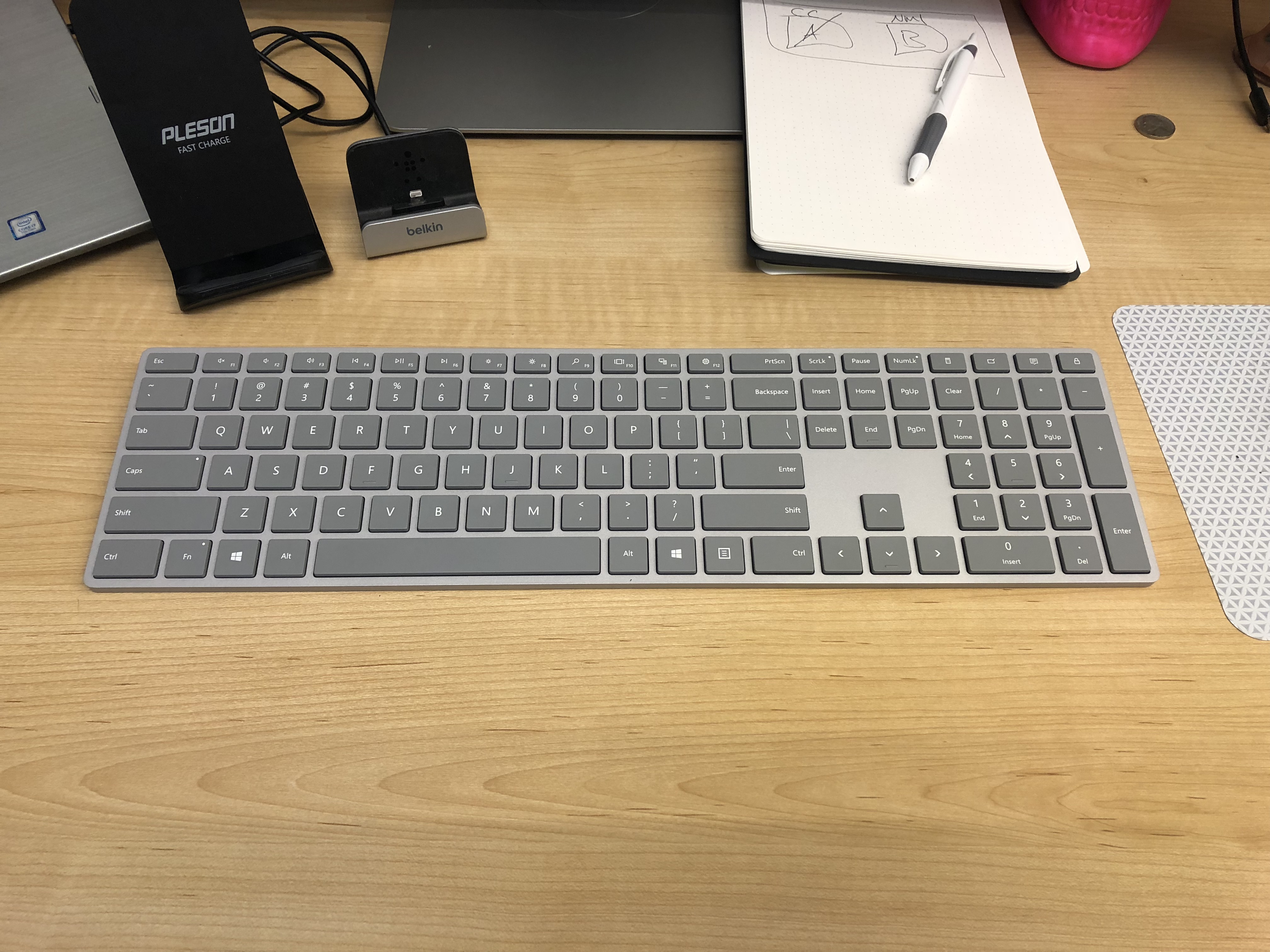 This is my current favorite for Windows machines. While the Magic Keyboard was good with Windows, it also lacks some keys that are pretty darn useful on Windows, most notably they Delete key.

I’ve only been using the Surface Keyboard for a few weeks but I really, really like it. The key travel is much deeper than the Magic Keyboard, which I don’t like as well, but it is pretty good once you get used to it. The keys don’t make much noise when typing, which is nice, but it also means it can be less satisfying to type on. For an office environment though, it’s low volume is welcome.

One limitation of this keyboard is it is Bluetooth only. There are zero plugs on it so you can’t plug this directly into a computer even if you wanted to. This could be a problem for some, especially if you ever need to do things before Bluetooth turns itself on, but if you can rely on always having a wireless connection, you should be okay.

The device is powered by 2 AAA batteries, which is a pain because nothing else in my life uses old school batteries, but they work and should last for months on a charge.

This keyboard is a disaster!

I picked this up after reading Ben Brooks’ review and boy was I let down. This is a “60% keyboard” which means it has 60% of the keys of a full size board. As someone who loves the only-slightly-bigger Magic Keyboard, I figured I would do fine with this. Turns out, no.

There is no function row, so all media controls and function keys need to be executed with a key combination. Now this is the case with some other keyboards and it’s not a big deal, but wait, it gets worse. Because the arrow keys are shared with other main keys, typing very common characters is a pain. Typing a question mark, for example, is done by pressing Shift+fn+?. It’s only one more key than usual, but it makes a big difference when you have to do it all day long. There are more of these, but basically it makes using a keyboard less convenient as most non-letter actions require some sort of combination of keys to perform. It’s a royal pain.

The keys themselves are quite nice and feel good to type on. It uses blue switches, which are incredibly loud, so this doesn’t work for office workers. Even putting on key dampeners and even super-gluing some foam in the base to muffle the sound, it’s still very load (especially the space bar). This is more of an opinion thing, but it was too much for me.

The $40 price tag is appealing, but I really find it hard to recommend this keyboard unless you are really prepared to do some finger gymnastics to perform very common tasks. 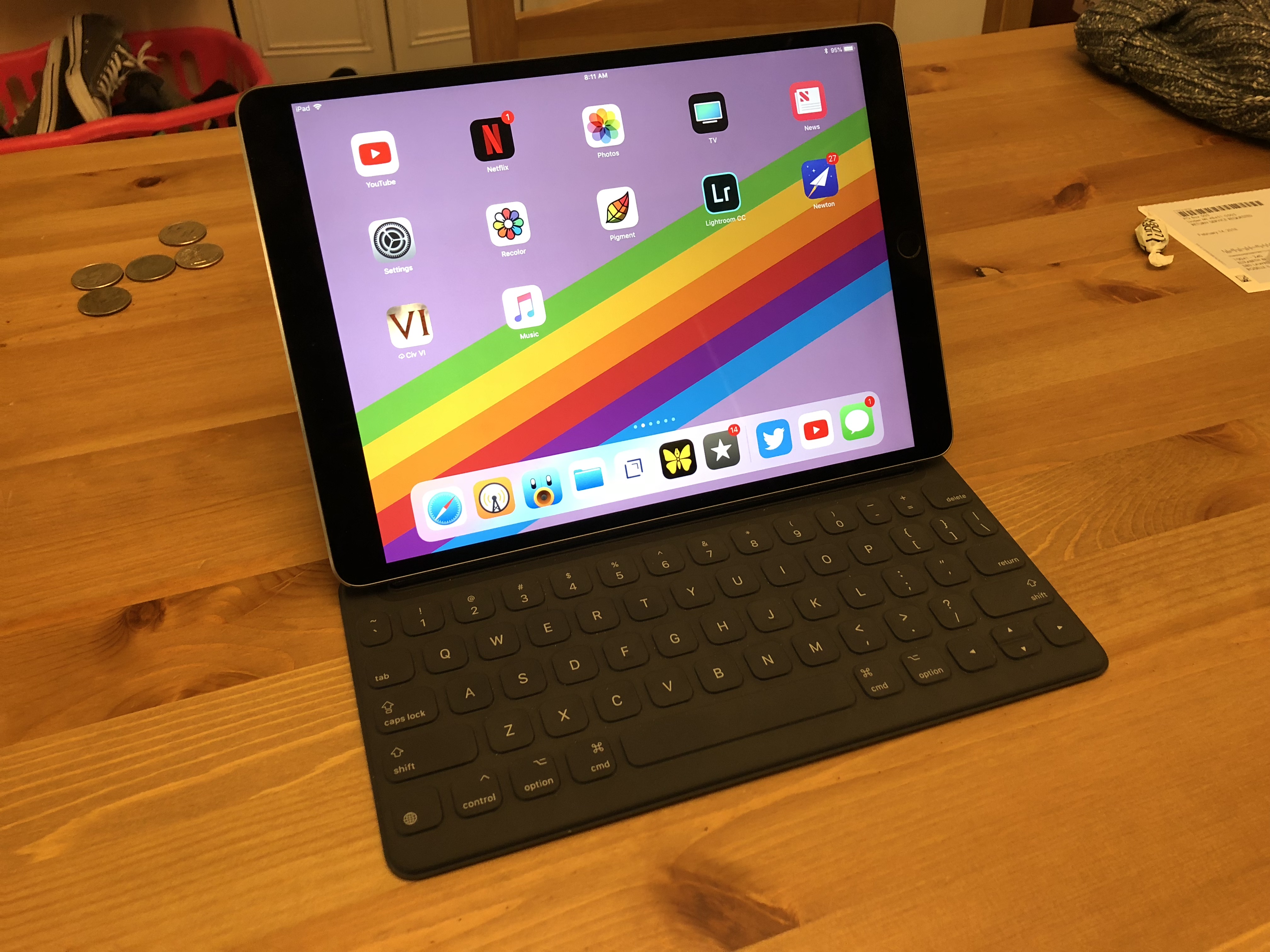 This was a surprise winner for me. The key travel on this thing is tiny, but I actually love it. I’m incredibly fast on this thing and I find I can type for a long time on it without any fatigue.

My biggest problem with this keyboard is that it lacks media controls of any sort. iOS lets me do a decent number of things straight from the keyboard, but having to use the iPad’s side buttons to change volume or accessing Control Center with a swipe to pause something feels like a pain compared to using a keyboard with media controls on it. I get that room is at a premium on this since it’s built into a case, but it does bother me every so often.

Overall, this keyboard is better than it has any right to be and I’m totally happy to have spent the relatively high price tag for it. 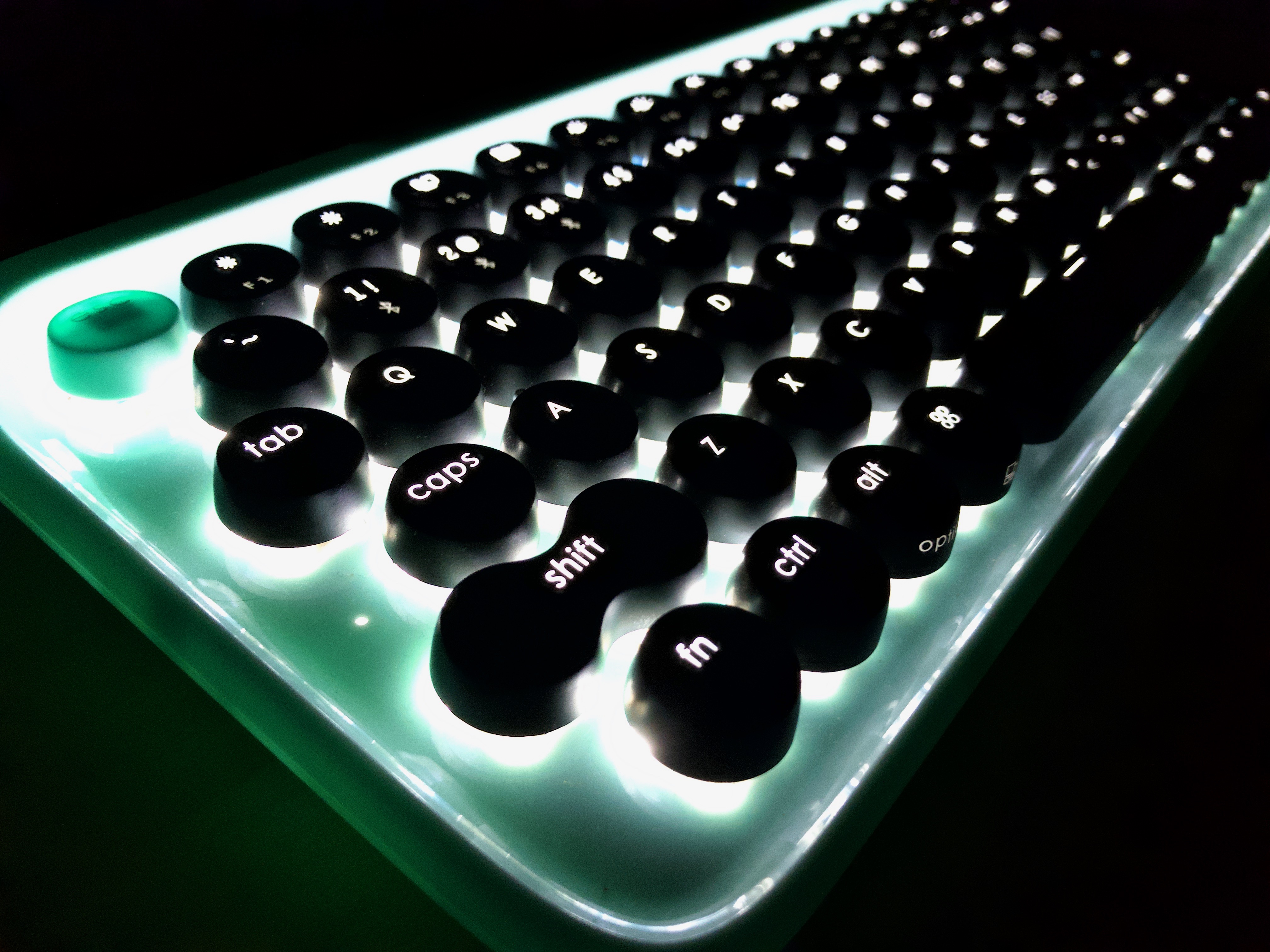 This is a controversial keyboard and I myself am torn on it. On the one hard, it looks amazing and the build quality is out of this world. The thing feels solid and the keys are very well put together. It’s clicky, but has a very satisfying sound to it. It’s not as bad as the Royal Kludge mentioned above for office use, but it still is decidedly loud.

But the hard part of this keyboard is the layout. Not only are keys circular, which means there is more air between keys and therefore less space to actually hit the keys you want, but the layout is just a bit off from most keyboards. Unlike the Royal Kludge, you don’t have to do any finger gymnastics to do anything, but some keys are just offset by a little that has lead to confusion for me as I move from keyboard to keyboard through my day. If this is all you use, then you’ll get used to it and be fine, but it takes some getting used to.