I'm starting to think I should just write my own damn workout app for the Apple Watch. That's how I feel after trying out yet another running companion for my Apple Watch, Nike+ Run Club. I've used plenty of the other options out there already, and I always go back to RunKeeper. RunKeeper has the best mix of ease of use, stability, and options. I've tried everything from Runtastic to Strava to Map My Run to Apple's built in Workouts app, but they all have quirks that keep me away. RunKeeper is not without its own issues (such as telling me I'm about to embark on a 4.99km run every time I start up a 5km run), but it beats out the rest.

That general frustration is what lead me to give Nike's newly launched Nike + Run Club a shot. I can't say it's perfect, and it may not even replace RunKeeper, but Run Club has a different feel than the other running apps on the market. It's held back by some pretty significant flaws, but it's nothing that an update or two can't solve.

A touch of humanity

Let's start somewhere positive. Nike+ Run Club is easy to set up and get running with. You have to create an account up front, but once you do you can just start tracking your runs with little friction. What I like most about Run Club is that it feels the most "alive" of any of the apps I've tried.

This humanity comes from the simple UI, which does a good job of showing you just the essential information about your current workout without all the cruft some other apps get bogged down in. It also goes a little farther by including encouraging messages from famous athletes after you complete a particularly notable workout. I am terrible with recognizing athletes by voice, so I don't know who it is, but they're still great to hear. I got some words of encouragement after my first run telling me that I'm off to a great start. I had another one where someone sounded incredibly proud of me for besting my previous best mile split time. I wouldn't expect myself to enjoy these short quotes at the end of some runs, but I actually do.

You also have some controls over the voice notifications that tell you how you are doing mid-run. This is an industry staple, but Nike's are a little nicer than the rest, with custom-recorded updates, that sound more natural than the Siri-voiced ones that most other apps use. RunKeeper has custom voice work as well, but theirs is more robotic and so...

than Run Club's implementation. Run Club also sets itself apart by letting you not only customize when these alerts are given, but what order you want each stat to be delivered. I have not seen this as an option in any other app. As an additional bonus, those mid-run updates can also be routed to your Apple Watch's speaker, so you hear the update on your wrist, not just in your headphones like every other app. 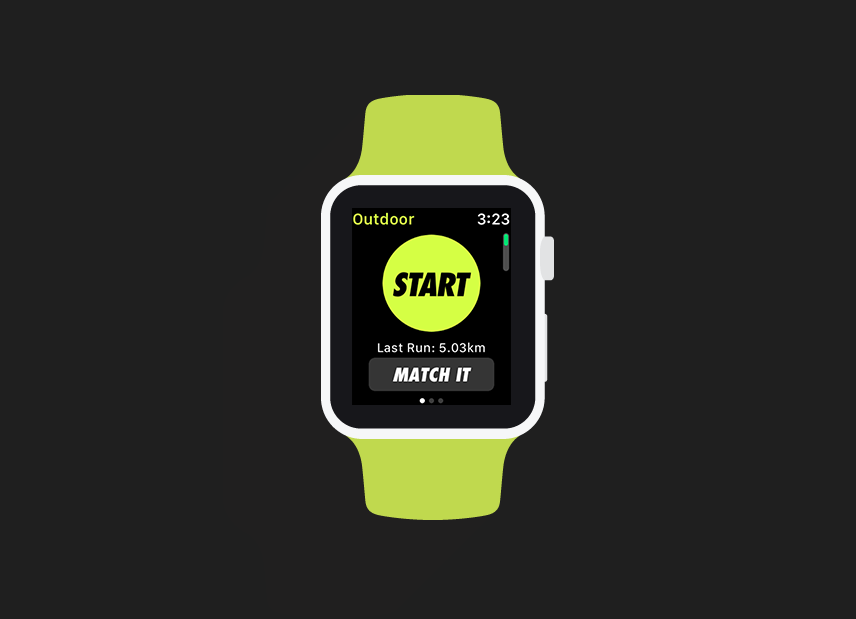 I also like how the home screen on the Apple Watch app has a button to match your previous run. The app is subtly pushing you to keep improving, and I think it does it better than any other app out there. 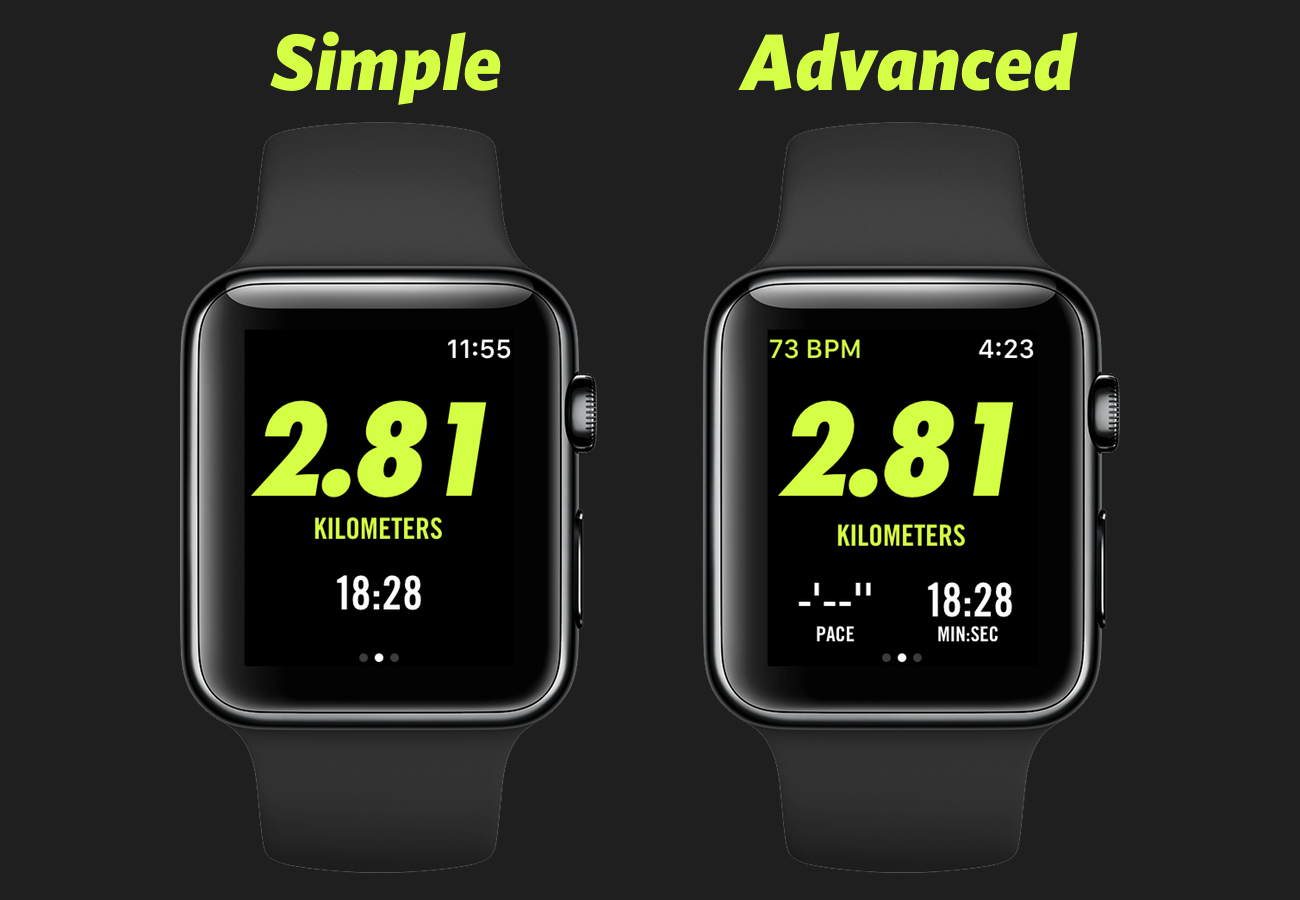 As a final note of positivity, I like Run Club's UI when in the middle of a run. The simple option is on by default and is a little too minimal for my taste. Toggling on the advanced view (in the watch app, scroll down from the "Start" button) shows you time, distance, pace, and heart rate. You can also scroll the crown when you're looking at either of these views to choose which stat gets put front and center. As you can see, I like to have the distance there, but you can choose what's best for you. It's a nice touch.

Overall, Nike+ Run Club just has a warmer, more welcoming feel than it's peers on the market. Every other app I've used is more clinical. They're more stat trackers than helpful "companions." If Nike can iron out some of the below issues, it's this warmth that I could see making me a loyal user for a long time.

A couple quirks hold it back

Run Club is still new, but it has not been off to the greatest start with Nike's long time fans. The initial feedback was brutal, and Nike has addressed many of the showstopper bugs people were dealing with at it's launch. But today there are still a bunch of little frustrations that make this app feel like something I can't trust to be my running app of choice.

One of the things that got me excited abut this app was its built in media controls in the Apple Watch app. As you might expect if you read this site at all regularly, I run with my Apple Watch and I do all my workout tracking from my wrist. One of the major hassles with doing that is that it means my media controls are always a couple taps away, which is not ideal when I'm in the middle of a run and just want to skip to the next track or fast forward in a podcast (no, you're skipping over the ad spot!).

Run Club has a somewhat convenient music control built into the app, and it's easily accessible by simply swiping left on the watch face. This brings up your media controls you would expect, hurrah!

But wait, the catch is that the controls will only work with Apple Music or Spotify, not any other music service or podcast/audiobook app. I listen to a ton of podcasts, and Pocket Casts has no access to these media controls. 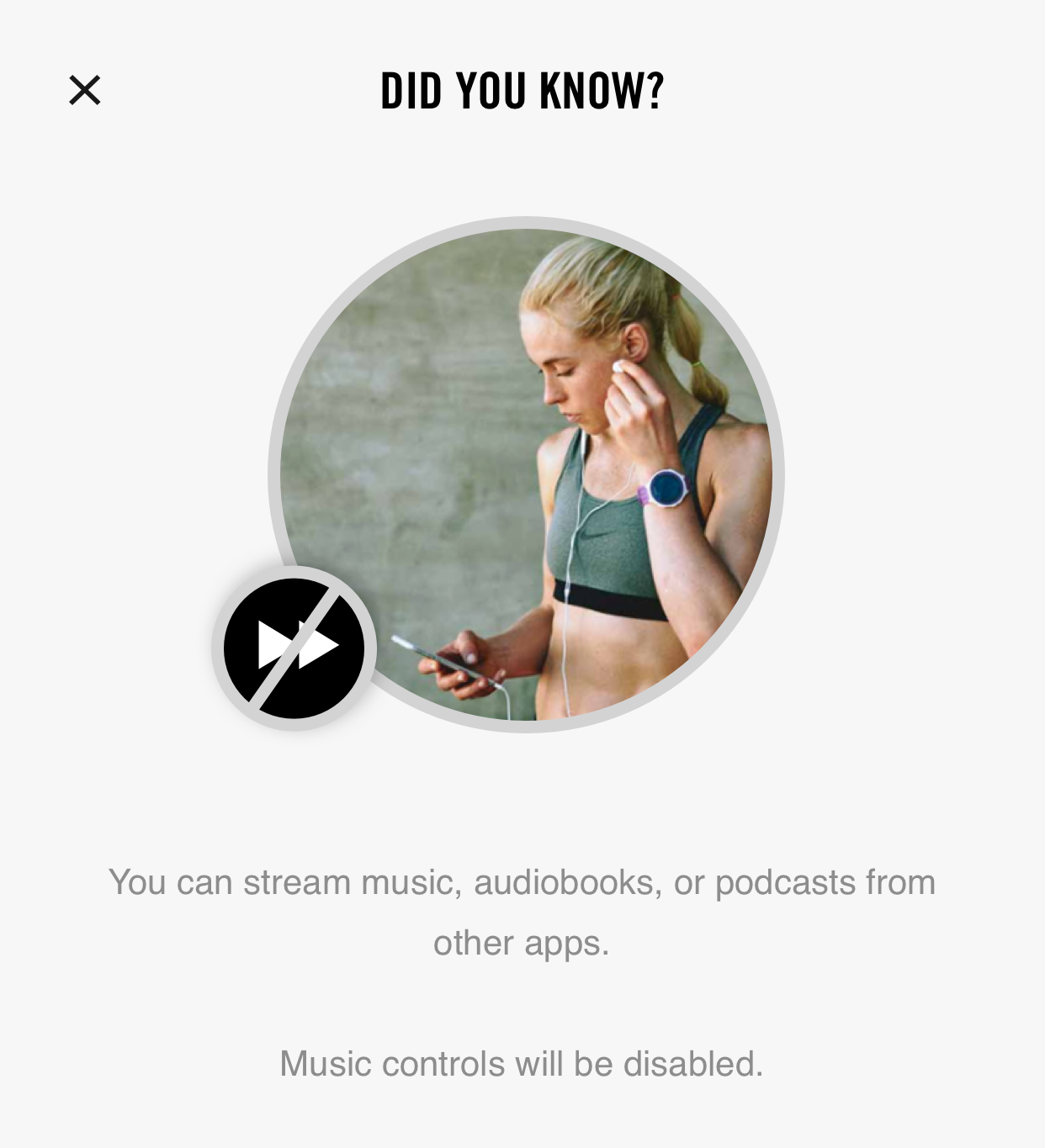 I can tell Run Club I'll be listening to another app, but that disables the media controls, which I'm sure makes sense for some reason, but it seems like they should be accessible no matter what my audio source is.

To add insult to injury, selecting a non-integrated media option (essentially telling Run Club not to worry about it) can lead to a maddening bug where it will pause the thing you're listening to when it give you the mid-run updates, but then not resume your media after it's done updating you.

To add insult to injury, once you hook up Apple Music to the app and tell it you're going to listen to that service, you can't actually go to the Apple Music app and play from there, you actually have to pick your music from an Apple Music interface inside Nike's app. The advantage to this is that the interface is pretty nice, and your personal playlists are accessible here, but there's a major downside. Once you go outside of Nike's custom Apple Music interface, you lose control from within the watch app. So if I'm mid-run and say "hey Siri, play Attack on Memory by Cloud Nothings" Siri will start playing the album, but I'll love media controls in Run Club on the Watch.

My dream is that Nike irons out the bugs I've had with interrupted playback, and just changes those media controls to generic controls so I can control whatever I would like within their app. Please Nike, this alone would probably make me switch.

Where are my maps?

I've had a couple runs where everything seemed to be going fine, but when I saved my workout, the GPS data seemed to disappear into the ether. I think I have tracked this down to only happening sometimes with I interact with the run entirely from the watch app and not the phone app, but that doesn't make any sense. The app is definitely using my GPS data no matter where I initiate a run, but for whatever reason I get this sometimes: 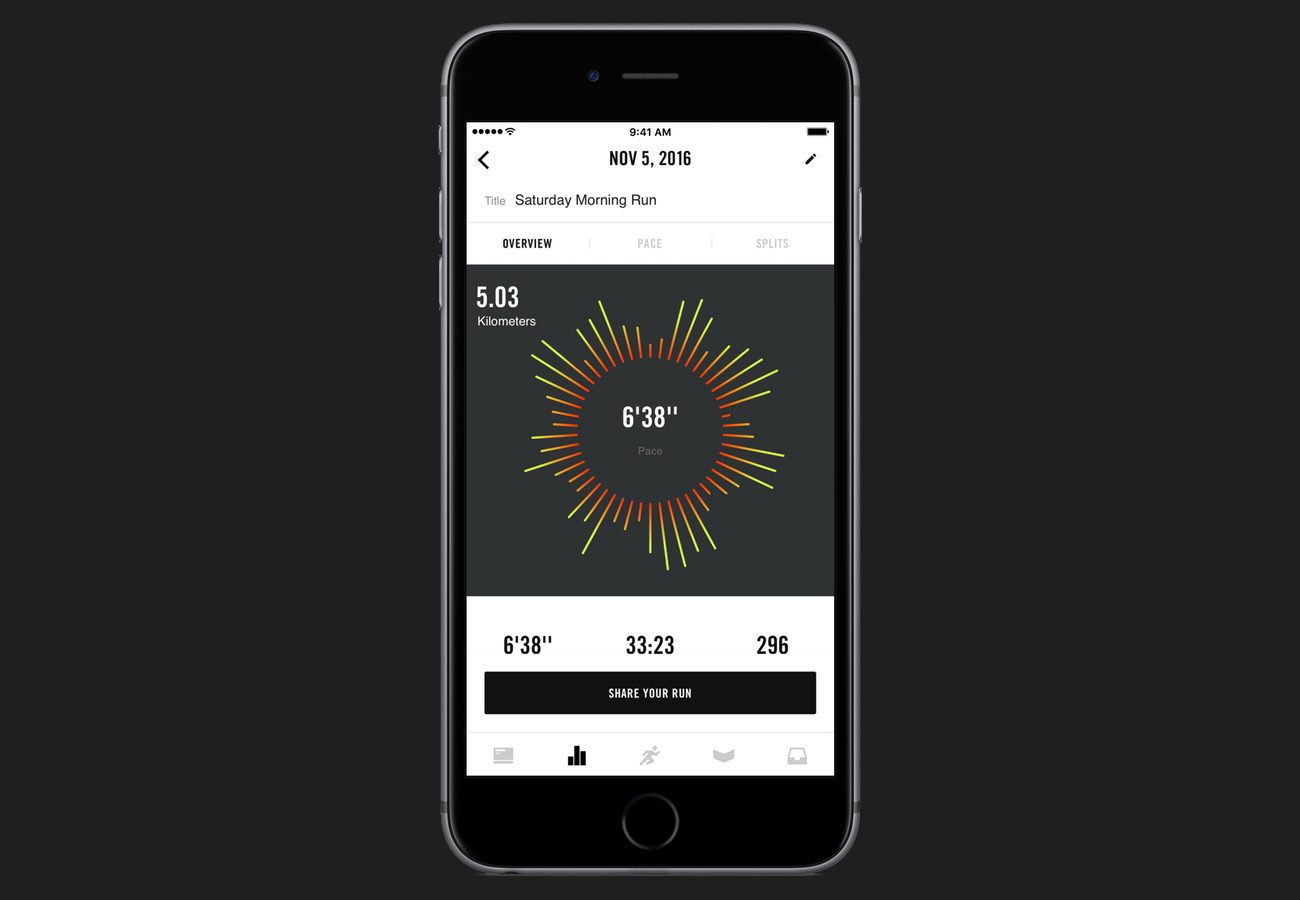 I don't really need my map data, but it's a nice thing to have, and I don't see any reason why it's sometimes saved and sometimes not.

Your datas not excaping Nike

Nike+ Run Club plays nice with Apple's Health and Activity apps, which is great. This means your Run Club workouts show up in the Activity app along with any other Apple Watch workouts you complete. It also means that you get your heart rate data and calorie burn tracked in HealthKit. This all fantastic, but there is one limitation that you may or may not care about.

Nike does not let you export your data from them. This is frustrating for me because I like to track this all on my end, so a CSV with all my workouts' data is a killer feature for me. RunKeeper lets me do this, as does Strava and Runtastic, but Nike has zero options for getting your data out.

Whether this is a deal breaker for you or not is up to you. It's something I would like to have, but I'm personally easing off obsessive life tracking, so this is something I can deal with. Besides, I have a very fancy analog way I track my runs anyway.

Nike+ Run Club is so close to being my perfect running companion app. I really enjoy the user interface, and it seems like it is built to be used just as well from the iPhone or Apple Watch, but it misses the mark just a bit. The missing maps and frustrating music controls are tough to deal with, and you really don't want that from an app that is really there to tell you how fast you're going.

More than any other app, Nike+ Run Club gives me the feedback I need to want to run more. It feels very Apple-like in a way, in that it's about building an experience more than just delivering you a bunch of numbers with no context. I hope Nike continues to make Run Club a more full-featured and delightful app to use.

I'm going to continue using this for the next few weeks and hope it sticks (and gets updated), but I wouldn't be totally surprised if I end up just reinstalling RunKeeper and using what I know works well enough.

Apple Watch Sales are Disastrous! No, They're Amazing!

Remember a few weeks back when I expressed my concerns [https://birchtree.…

Apple Does This Sort of Thing