I've been wearing my AirPods quite a bit since I got them 3 weeks ago. They are without a doubt the best earbuds I have ever owned. These aren't just a small step forward, they are a giant leap in many ways and they are right up there with the Amazon Echo in being a product I don't know how I ever lived without. AirPods are not a perfect product, but they are great in so many of just the right ways that they easily make up for any shortcomings.

The most notable thing about AirPods is that they are truly wireless headphones. Duh, that's obvious, but it can't be overstated how big of a difference that makes. As many have already said, this means that they feel lighter in your ears than you're used to. They really disappear into your ears to a point where I forget they're there at all and music is just happening in my head. 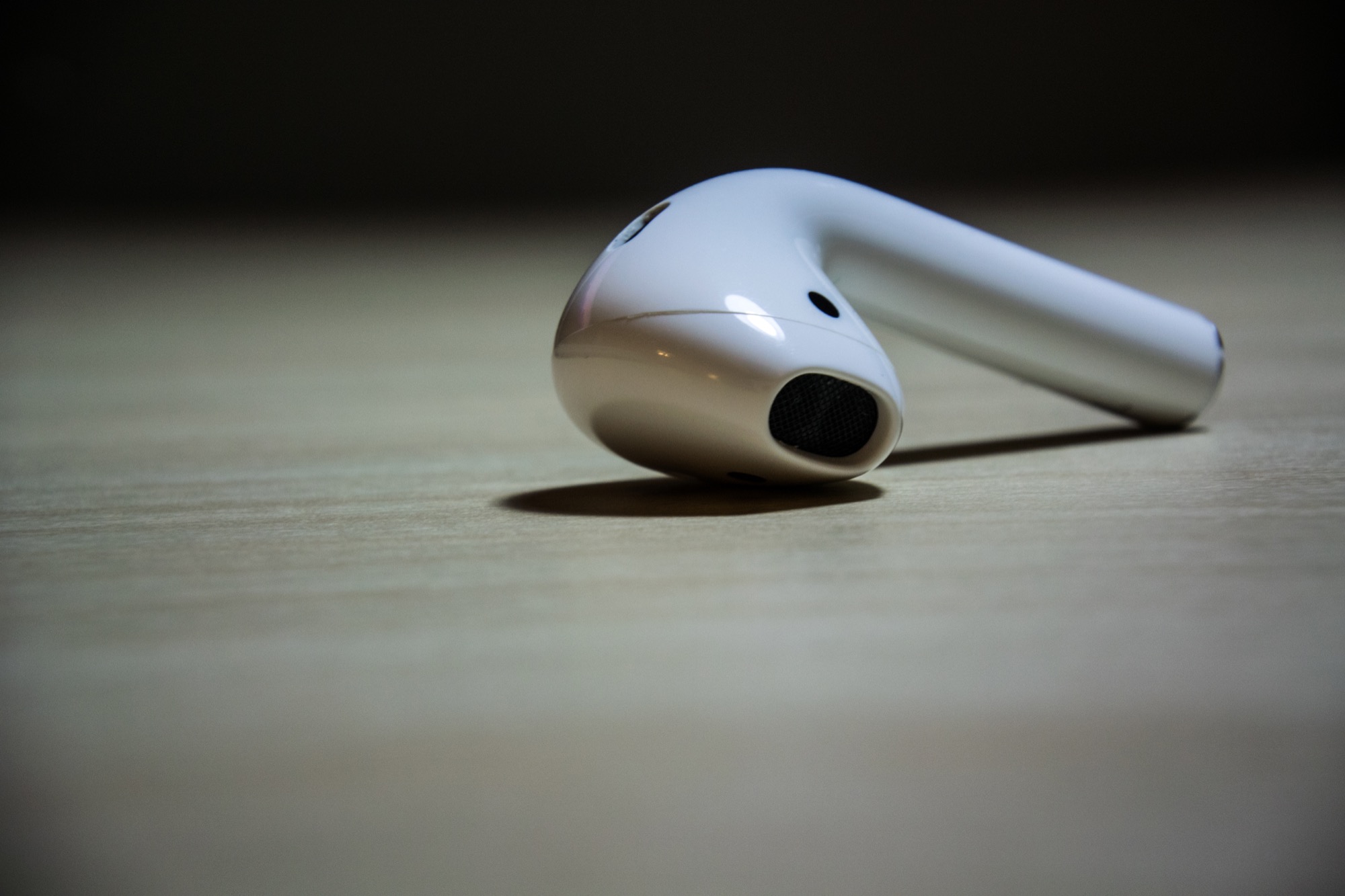 Truly wireless also means that you can wear them one at a time without issue. I find myself wearing one of them when I'm cleaning the kitchen or when I'm doing laundry. I technically could have done this before, but I don't want to have both ears covered so I can hear other things, and I don't want to have a wire dangling down from my head that I have to deal with holding down somehow. AirPods are also smart enough to output mono audio when you are only wearing one of them, and switch to stereo when you stick the other in. Very smart!

Finally, truly wireless means I never get a cord stuck on anything that rips them out of my ears. This happened all the time with wired headphones, as door knobs, cabinet handles, bag straps, and even my own damn arms would catch on them and pull them out of my ears if I was lucky, and pull my whole head in a random direction if I was unlucky. Even the hassle of the cable sticking to my sweaty skin when I went for a run would cause them to come out even with Bluetooth headphones. I've yet to have a headphone fall out of my ears for any reason.

The stupid simplicity of these things is awesome too! There are no buttons on AirPods, which is a little thing, but major in practice. It's big because I never feel like I'm managing my headphones. Yes, I do need to charge them, but I just throw them in the charging case and they charge up. I don't have to turn them on or off either, as the do that automatically based on where they are. As long as I keep a charge in them, they really feel like they're always on, since all I do is put them in my ears and they work right away.

Oh yeah, and having them pause whatever is playing when you take one of them out is always useful. Some reviews I saw seemed to imply this was something that had to be built in by individual apps, but that is not the case. Any app that can be controlled by the standard iOS or macOS system media controls will work with this auto pause feature. 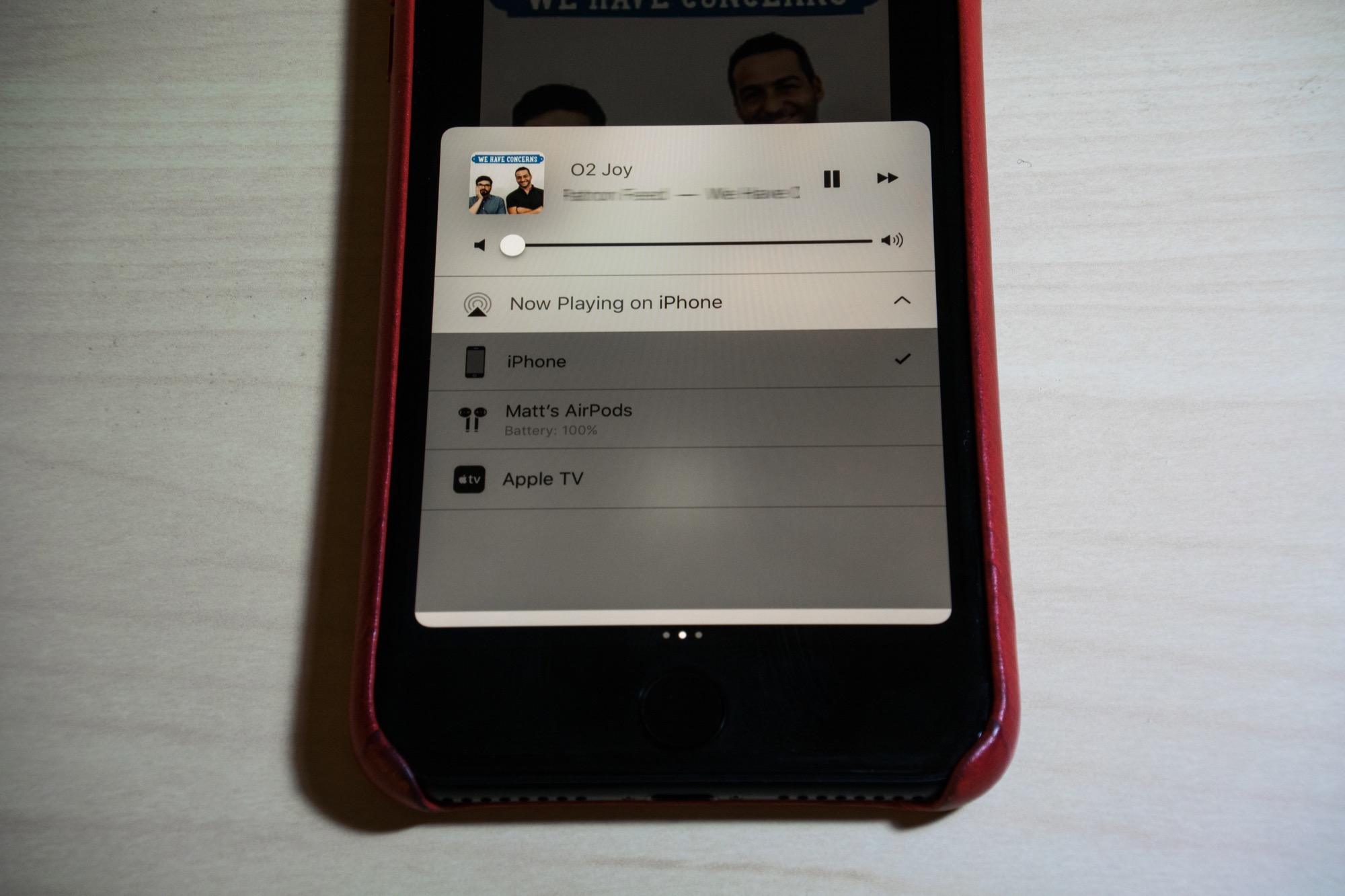 Much has been said about the pairing process that is assisted by Apple's new W1 chip, and the hype is real! Pairing to my iPhone took literally 3 seconds, as I opened the case, my iPhone gave me a pop up that said "hey, are those your AirPods?" and then they were paired. And not only did that pair them with my iPhone, but they also now show up on my Mac, iPad, and Apple Watch as output devices. You're essentially pairing with your iCloud account, and not a particular device.

I've had no issues yet with getting them to work with any device either. Switching between iPhone and Mac and iPad is simple and works consistently.

This review can't go further without mentioning the charging/carrying case these things come in. The case does in fact look a lot like a floss container, but it's very pleasant to hold and feels premium. Upon opening, you see the tops of the earbuds and a green or orange light that indicates the AirPods' charge. Green means 100%, and orange means they're still charging. If you've owned a MacBook with the MagSafe connector in the last decade, you know what I'm talking about.

There's a particular satisfaction when you put the earbuds back in the case, as they use magnets to suck them in and lock them in place. And the satisfying snap the case does when it's closed is surprisingly satisfying.

But like I mentioned above, not all is perfect in the wonderful world of AirPods. The first issue is with battery life. I would say battery life is adequate, but not amazing. I've never had them die on me, but they don't last quite as long as I'd hoped. The headphones themselves do indeed seem to live up to their advertised 5 hours of use metric, but they don't do so well when left sitting idle. Leaving them on a desk outside the charging case means they drain power ever so slowly. So while I can get 5 hours of payback, I can't do 1 hour today, and then 2 hours tomorrow, and 2 hours the next day. No, the battery slowly drains if it's left on its own and you won't get the advertised battery life if you let them sit outside the charging case for too long. This makes some sense, as the AirPods are never really "off" and are always connected to one of your devices, and therefore has to have the wireless antenna active more often than if it were simply turned off. 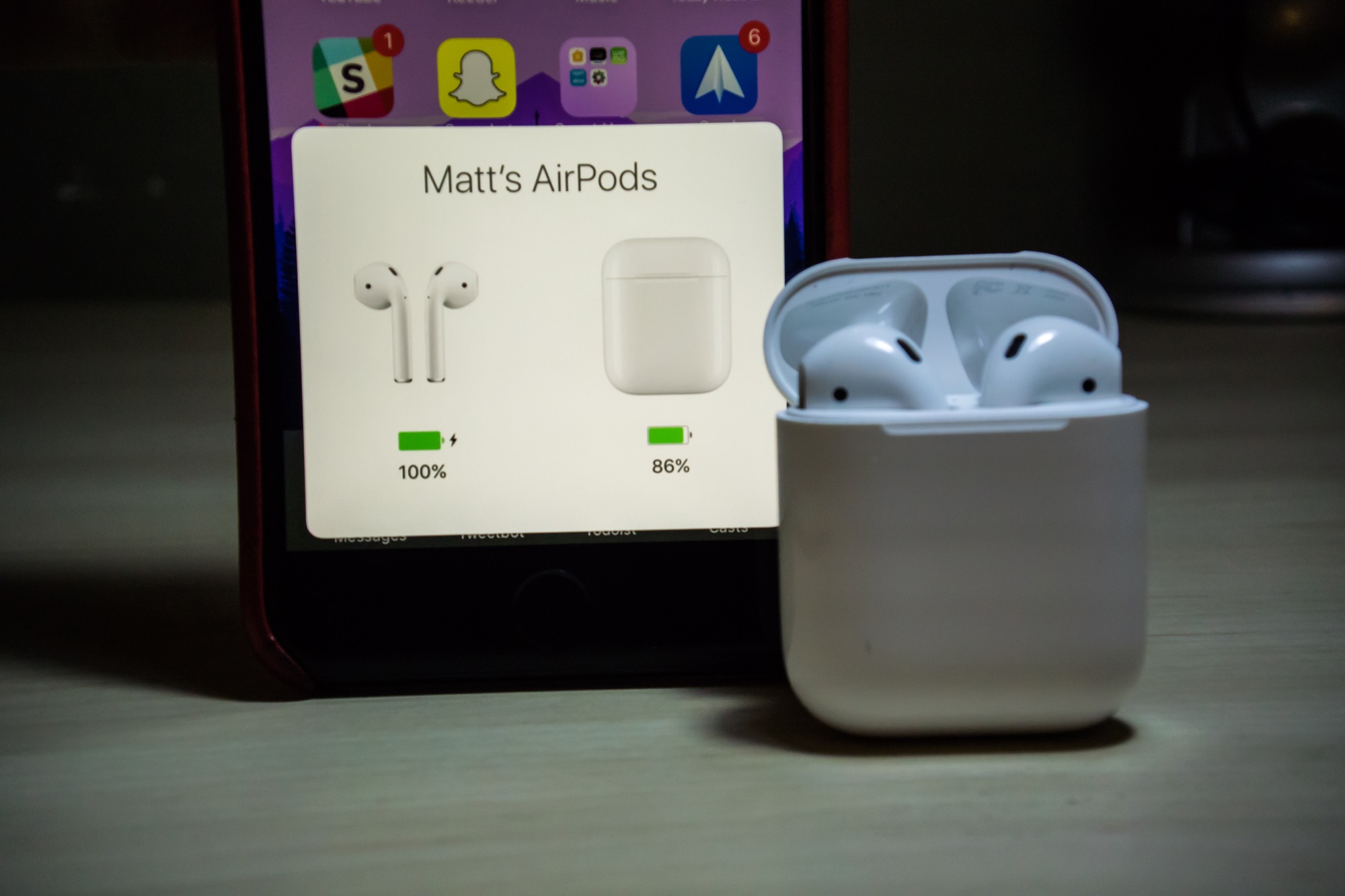 My advice to make sure you never run out of juice is to store the earbuds in the case at all times and then plug the case in overnight once or twice a week depending on your usage. You'll be okay, but it is unfortunately something you have to think about from time to time.

Siri is also a mixed bag in AirPods. A double tap on either pod will trigger Siri, but the implementation is a little off. I sometimes have issues with my double tap being recognized, at which point I tap harder on my head to get it to work, which can be a little uncomfortable, depending on how frustrated I was for that second double tap. Also, Siri has an awkwardly long pause after completing her answer to queries, and you don't know if you should wait for the music to start playing again of if you have to do something. You get used to it, but even after a few weeks, it still feels like that silence is a little too long.

That said, Siri is about as good as it is everywhere else on AirPods. You can let your opinion of Siri color that statement however you want, but it is inherently cool to have Siri residing in your head. There's something here, and I can't wait to see it develop over the coming years.

The only other issue I can bring up is that these things are dangerously small. That makes them great for all the reasons listed above, but it also makes it so you feel very self-conscious about handling them. I'm always very careful to pull them securely from my ears and get them in the case as soon as I can so that I don't lose one of them. Apple will replace individual AirPods for you at a discount, but I hope I don't have to ever do that.

Ultimately those minor complaints are a small price to pay for these truly amazing pieces of technology. AirPods are not cheap, but they are easily worth the price in my book. After a 2016 where people finding something to complain about everything Apple released, AirPods are an undeniable bright spot for the company. I freaking love these things! 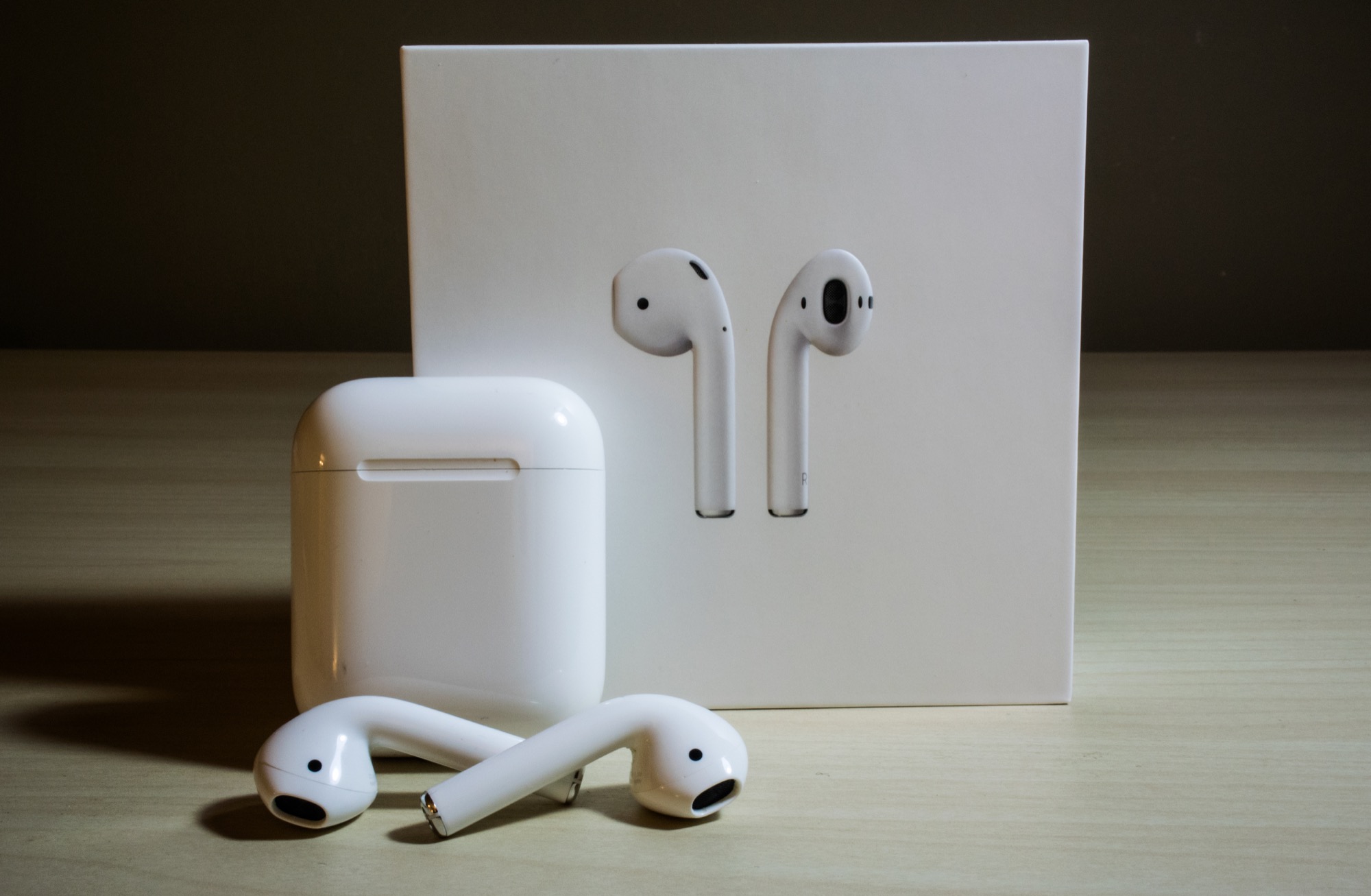 BirchTree Podcast 009: There is no magic trick for inspiration

My Mac workflows that will never, ever work on iOS