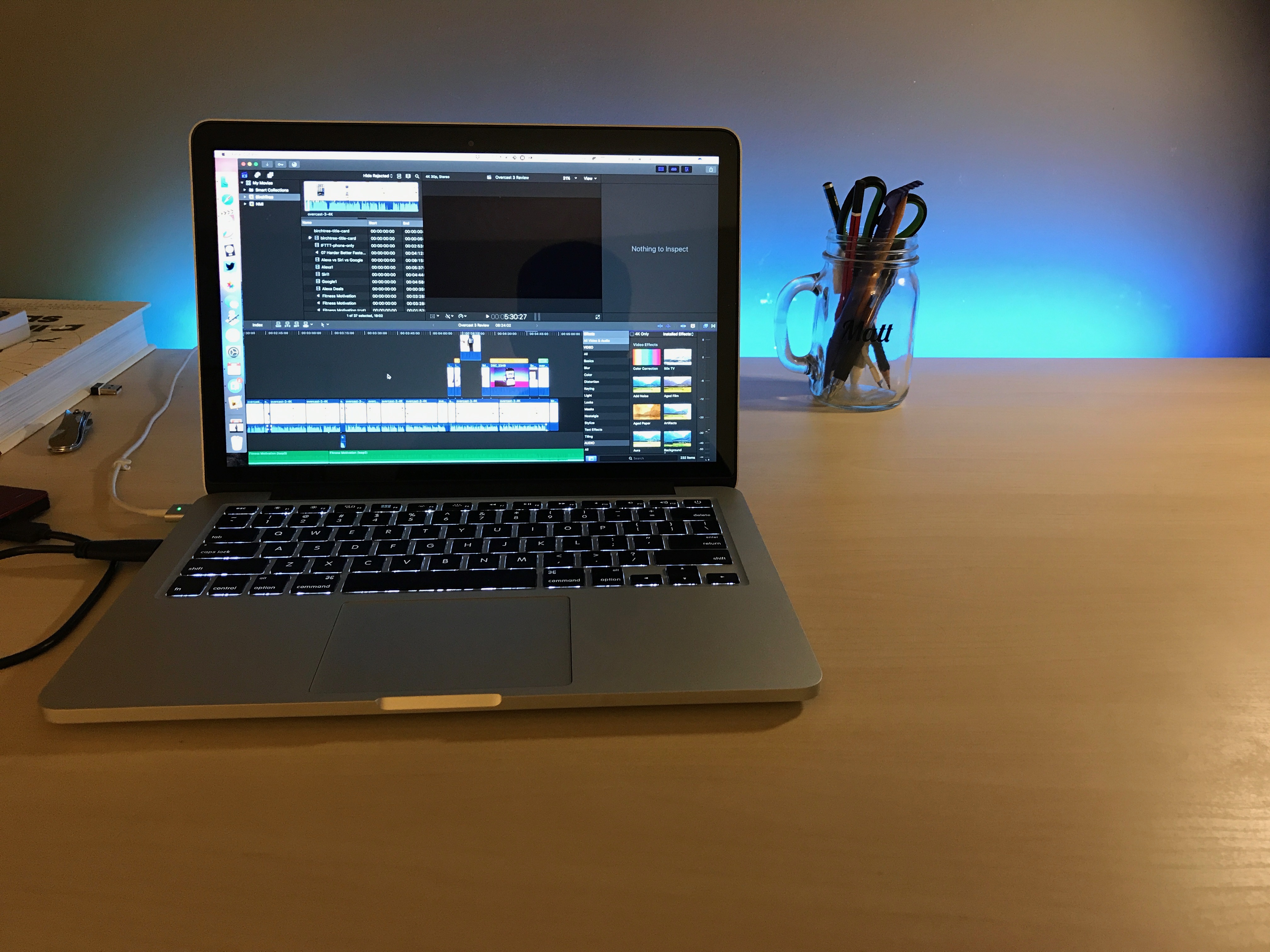 Above is a photo of my desk setup at home. It's a 13" 2015 MacBook Pro attached to a 1TB external hard drive. That's it! No external monitor, laptop stand, keyboard, or mouse. This is what my work space looks like basically all the time.

Meanwhile, at my office at work I have a nice Windows laptop, a 28" 4k external monitor, and a keyboard and mouse. I can basically arrange my setup however I would like, I just must have the Windows laptop the company provides (it's a nice one, so I'm not going to complain). The major difference between my work and home setups, besides the Mac vs PC, is that I have a mouse and keyboard hooked up at almost all times.

But why? At home I do video editing in Final Cut Pro X, audio editing in Logic Pro X, photo editing in Lightroom and Photoshop, create mockups in Sketch, and I do web development in a slew of other apps. At work I mostly use Chrome, spreadsheets, and do some work in the command line. Why on earth do I feel like I need to use an external mouse when a trackpad is built right into the laptop, and that works great for me for all those more input-intensive tasks on my Mac?

The answer is simply that Windows trackpad support is still light years behind macOS, and there are a couple specific reason why:

I have a Dell at work, and the trackpad could best be described as adequate. It's fine, and it's certainly better than what most Windows machines had 10 years ago, but it still feels like a secondary input method to me. It feels like something they put on there for you to use in a pinch, but you'll usually use a mouse.

Even on laptops with better trackpads, like the Surface line, the OS doesn't play as nicely with touch input as macOS. Momentum is different (and sometimes just absent) and there is a delay between my fingers moving on the trackpad and the UI on screen updating.

Mac users like me always have a hard time figuring this out. Macs had better trackpad responsiveness a decade ago.

A big reason I can get more done on my Mac with a trackpad is the gesture support is simply far beyond what is going on with Windows. Using 3 finger swipes to switch between desktops is way faster than using 2-handed keyboard shortcuts on Windows, swiping three fingers up or down to show certain collections of windows is lovely as well. Using 2 fingers can scroll or navigate forward and backwards in just about any document or browser, and pinching 2 fingers can zoom or scale just about anything in the system to your desired size.

There's more, but in short, macOS's gestures feel like natural parts of the user interface, not like something that was tacked onto the system.

All of this would be worthless without app support, and thankfully Apple and third party developers do a generally great job of making their apps work with trackpads in mind.

As I said at the top, I use a trackpad to do video editing. That may seem like an absurd statement to some video editors out there, but for me using a trackpad feels more natural than using a mouse with Final Cut Pro. Sure, a mouse works well too, but I prefer the trackpad for being able to pinch and zoom in the timeline, which I happen to do all the time.

Other apps take advantage of the trackpad too. Tweetbot, Ulysses, Safari, Chrome, Logic, Mail, and many more apps let you navigate their UIs with multi-finger swipes. It's usually easy to discover this functionality as well, as certain actions (especially two finger side swipes) have become pretty standard.

People will disagree with this assessment, and that's fine, everyone is entitled to their opinion. Others will tell me Windows' touch screen support is more important than touchpad support, but based on the untouched touchscreens in my office, it doesn't seem like that's been a valuable upgrade to our laptops/convertibles. But I feel strongly that there is something deeply flawed with touchpads on Windows, and it doesn't seem like it's ever going to catch up.

Another quarter, another record quarter for Sony's Game & Network Services division. The…

The Samsung Galaxy S8 and LG G6 just came out, which of…