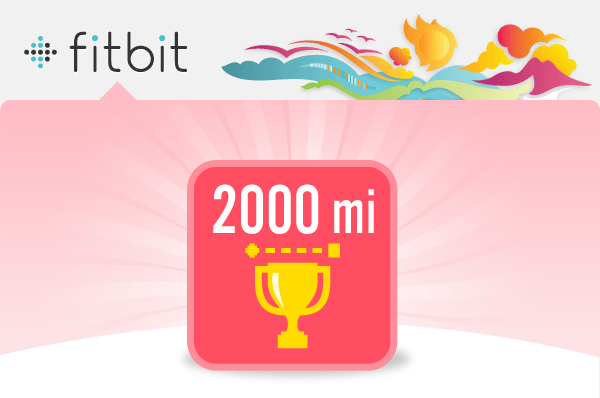 Today marked the 1 year anniversary of me buying a Fitbit and tracking every movement I made 24 hours a day[^1]. Like clockwork, I got an email this morning from Fitbit congratulating me on hitting the 2,000 mile mark since joining. To put this into a little perspective, that breaks down to:

Those numbers feel pretty good. That's a ton of ground covered, and is almost 1 million steps more than the generic recommendation of 10,000/day. This activity has also lead to some real heath advantages as well. I weight about 7 pounds less than I did a year ago, which is awesome! The ridiculous BMI say's I'm still actually overweight, but that archaic measure can GTFO.

I'm also just happy to have this stat in my brain now, especially since it's such a clean number. I will forever know that when I was 28, I moved 2,000 miles by foot. As technology is making it easier for people to tack this information, I presume that I will continue to collect this data for years to come. A year from now I'll be able to make a direct comparison between years. Even 10 years from now when I insist that "I'm as active as I ever was!" I'll have the cold hard facts to either back me up or to shoot me down. I hope they'll back me up!

Birch Bark 16: What If We Just Don't Shoot Anyone?

Some New Apps on my iPhone