Don’t ask me why, but I picked up a pair of BeatsX headphones last week and have been using them instead of my AirPods since then. I wanted to get a better idea for what the wireless headphone experience was outside of Apple’s flagship offering. This is not a full review, but I wanted to share some of my thoughts as to why these perfectly good headphones have made me appreciate AirPods even more. 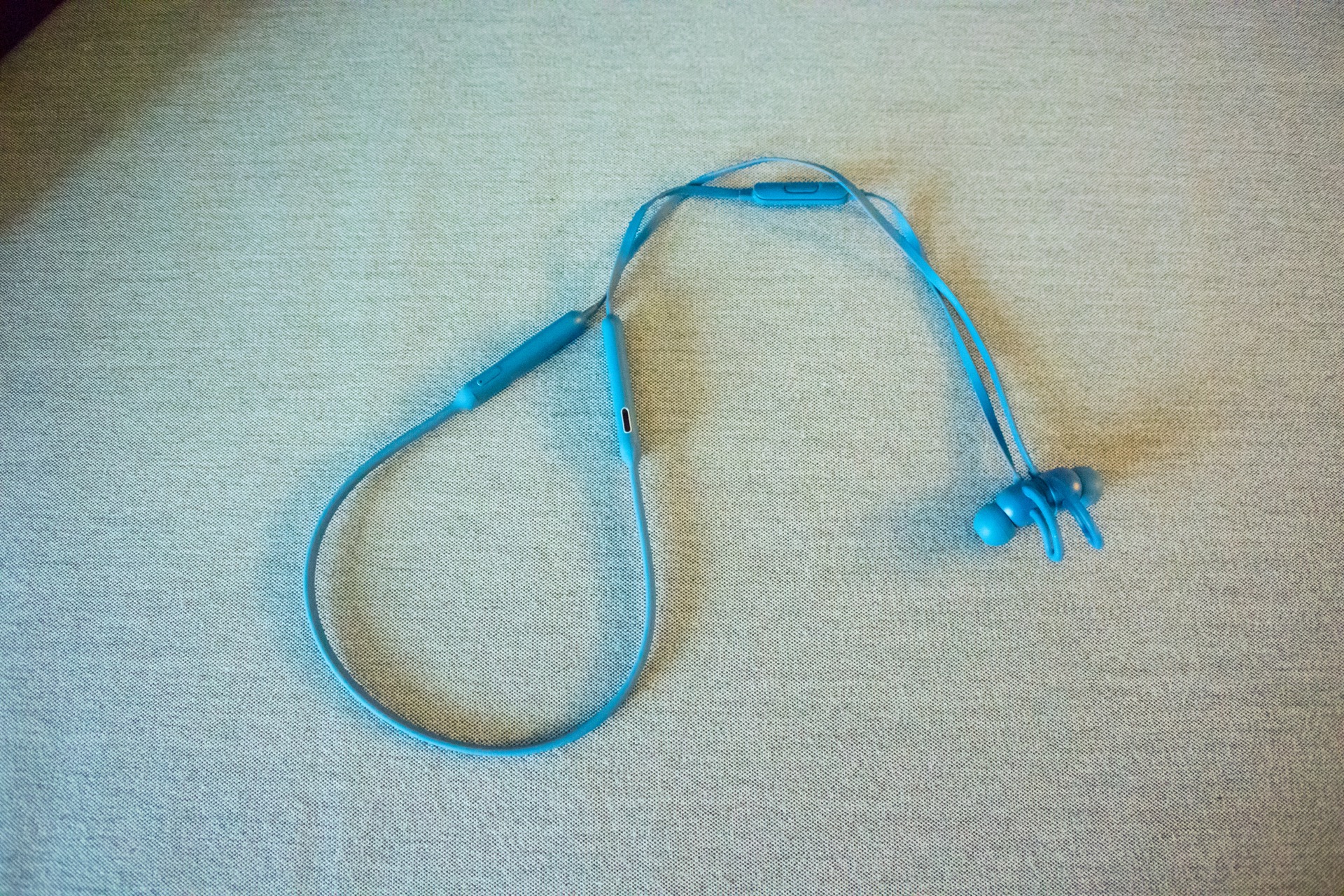 The BeatsX headphones come with the same W1 chip that the AirPods have (BeatsX actually had it first), and the setup experience is basically the same. You simply press the power button on the headphones (more on this later) and hold them close to your iPhone. A pop up appears with a nicely animated render of the BeatsX headphones (correct color, as well), and they pair with a single button tap. Just like AirPods, these were immediately synced to all my iCloud-connected devices, and I could switch between them super easily.

These also have standard Bluetooth, so they pair with any phone/tablet/computer as well. 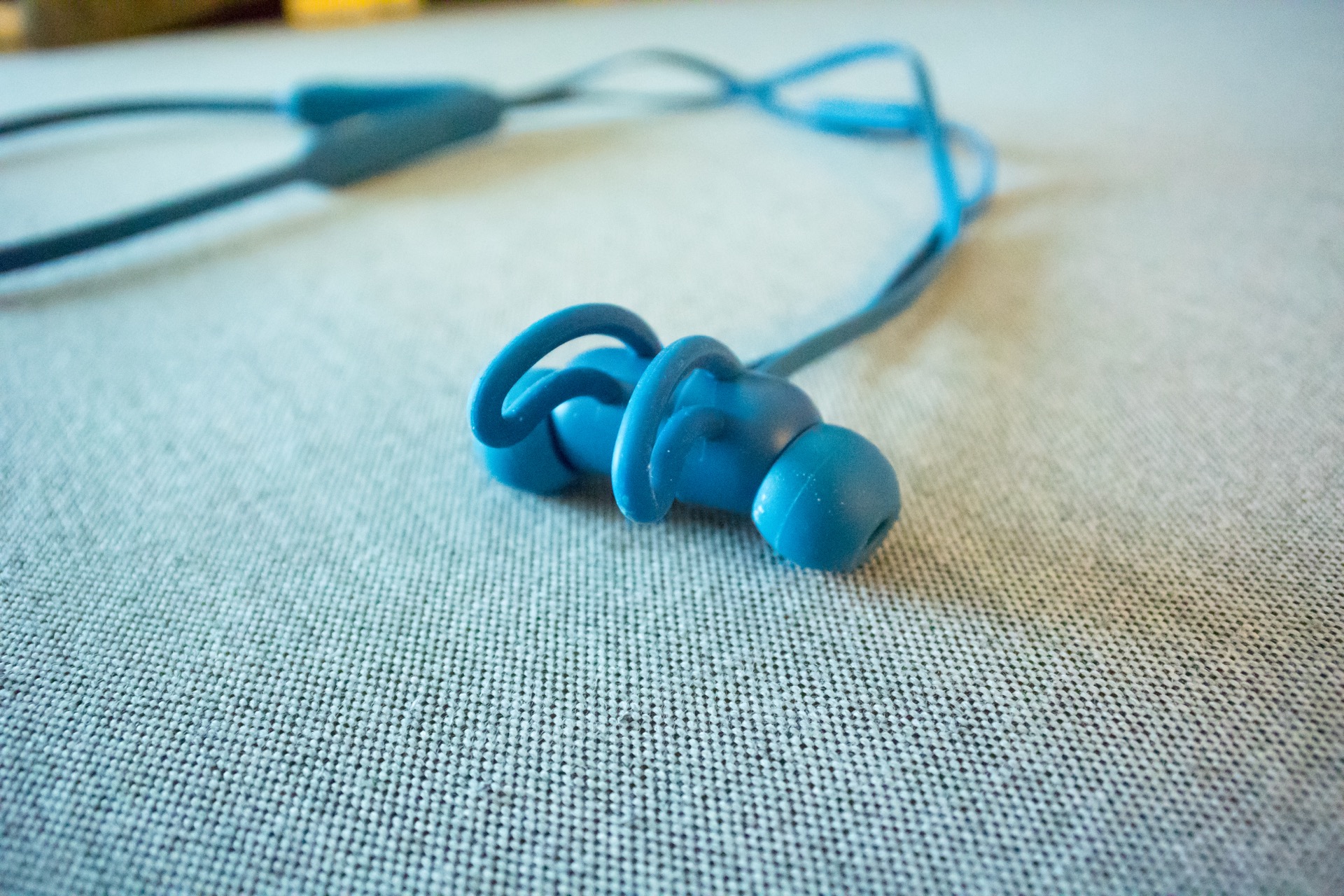 BeatsX are a more “in ear” style of headphone than AirPods, and I think I just have to acknowledge at this point that this type of headphone doesn’t work for me. No matter how I adjust the rubber tips (there are 4 sizes in the box) or how I use the wingtips (2 sizes in the box), they never feel like they fit in my ears. This leads to a tinny sound basically all the time. If I jam them into my ears they become very uncomfortable, but sound much better.

They don’t sound much better than my AirPods, in all honesty. I was hoping for a fuller sound, but I didn’t feel like there was much difference here; certainly not enough to warrant a second pair of headphones in my life. And with the added frustration of them usually not fitting right, they actually sounded worse much of the time. Not the BeatsX’s fault, really, just my ear shape.

All that said, much was made of the AirPods looking “weird” when they were released, but after a year of wearing them literally every day, I found the BeatsX looks way stranger on my head. The connecting wire is way too long, and it lead to situations where they were pulled out of my ears when I turned my head while on a run or just from my winter jacked shifting ever so slightly and rubbing against them as I walked.

The BeatsX have a long cable connecting each earbud that is designed to rest around the back of your neck, and I really don’t love this design. Again, testing these in the winter in the Midwest may have swayed m,y opinion here, since these got stuck in my coat and were generally uncomfortable. I already appreciated the truly wireless nature of AirPods before this, but I really appreciate it now. 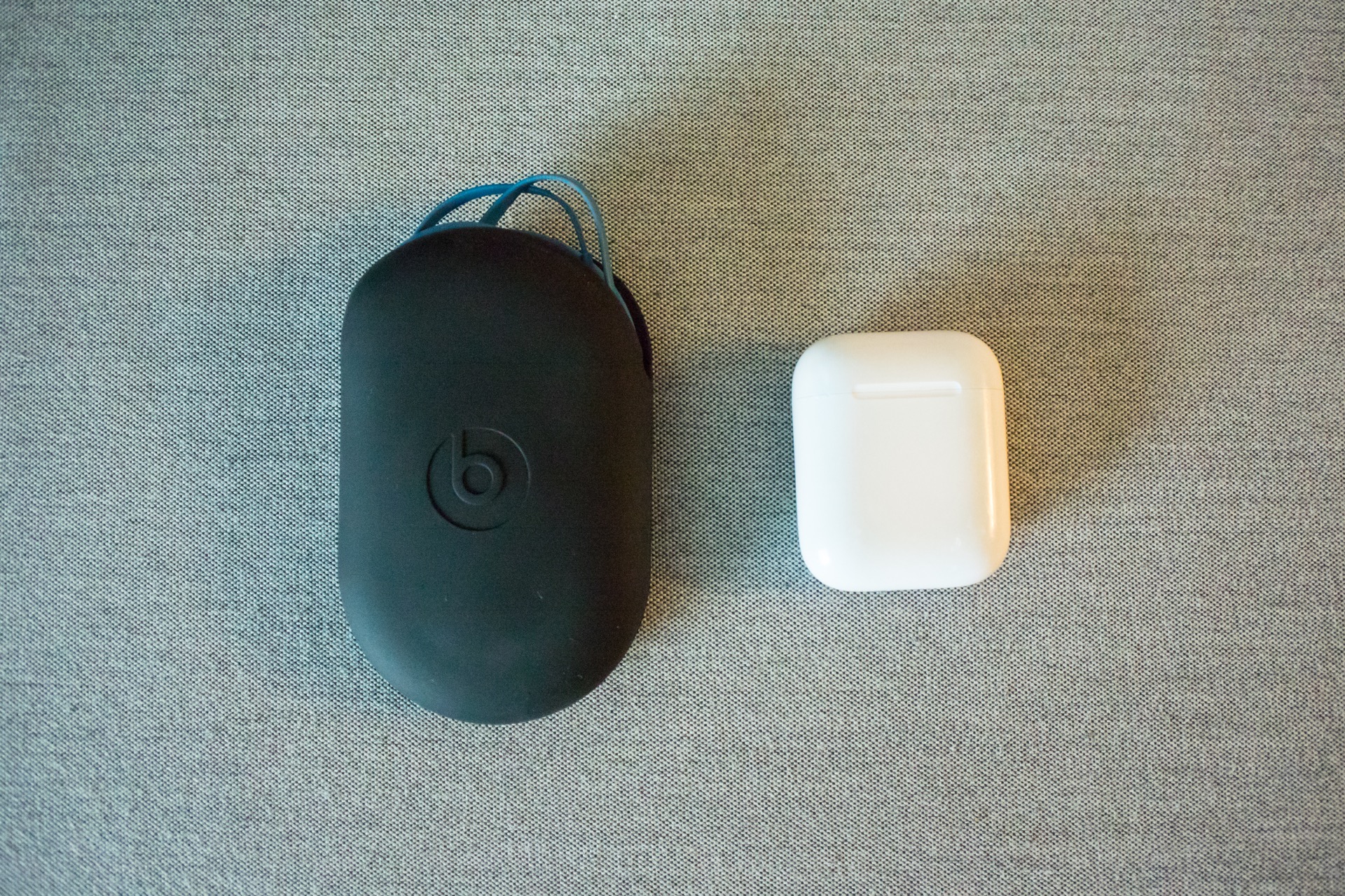 While it was somewhat obnoxious to have wires again, the real disadvantage I found with these was in general use and “management.” For example AirPods automatically know when they are in your ears, so they pause and resume playback based on what you do with them. Take one out of your ear: music pauses. Put it back: music resumes. Put both in your ears: they connect to iPhone and make themselves the media output device. Take them both out of your ears: they pause playback and media playback returns to your phone. BeatsX don’t do any of this, and I didn’t realize it until I realized my phone had been streaming to them for hours while I was at work and just took them out of my ears when I got there.

BeatsX also don’t automatically turn themselves off, apparently. Even if you are not using them to play anything, they will stay on until you manually press the power button on the wire. Meanwhile, AirPods disconnect and switch to a low power mode (essentially off) until I put them back in my ears.

These sound like little things, but it brought me back to what regular Bluetooth headphones are like and I have to say I was not very happy with the experience. Maybe I would have gotten used to it eventually, but it just felt like I was managing my headphones more than I ever feel like I have to with AirPods. 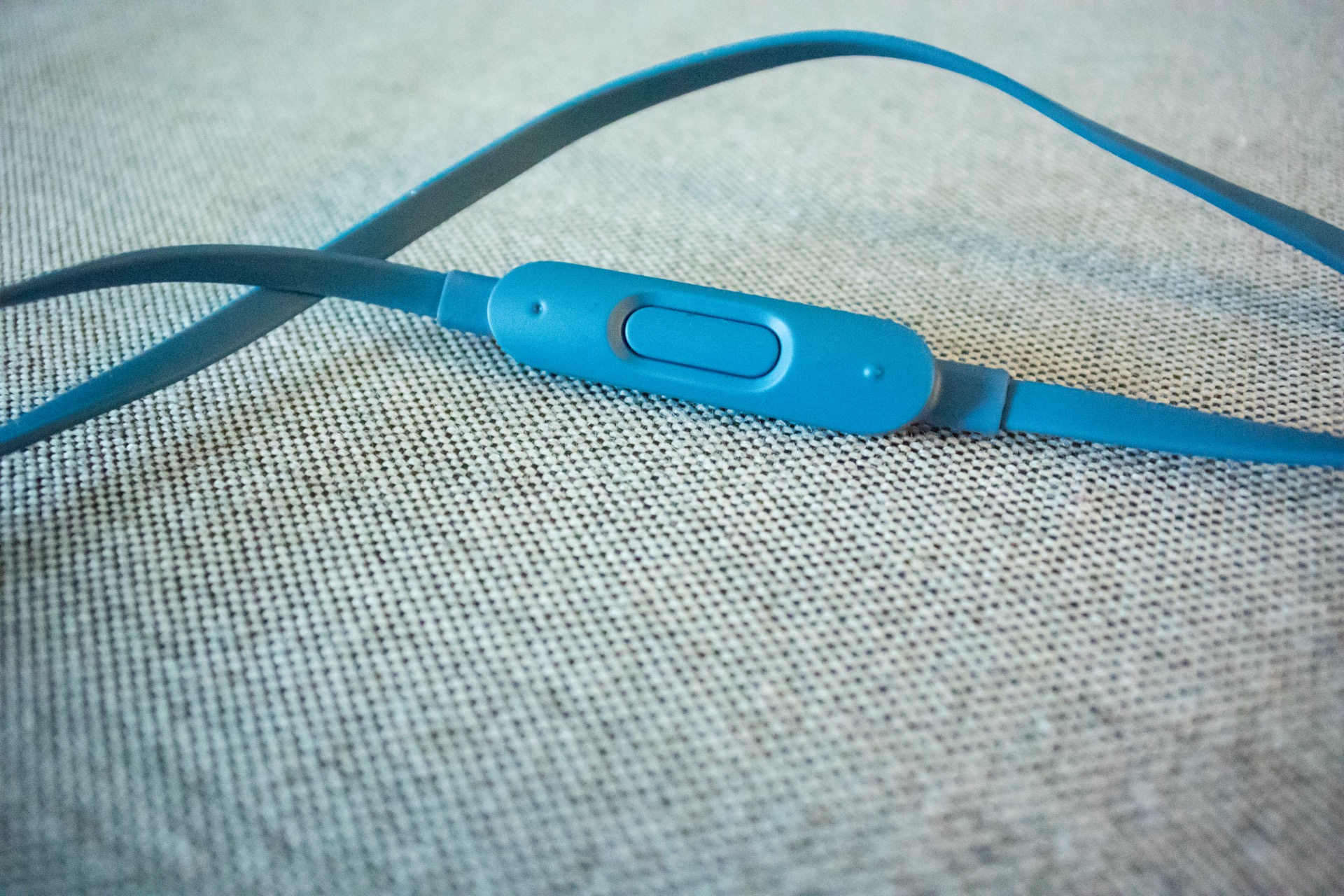 The BeatsX did win a point with their inline controls. While it’s okay having tap controls on the AirPods, it’s nice to have a button for play/pause, next/previous track, and volume up/down that’s easy to access. If AirPods had a touch interface where I could slide up and down on the AirPods to change volume and tracks, they’d be on top here too, but it was nice to have more robust controls while using these headphones.

Battery life o the BeatsX are rated at 8 hours of battery life, and they seemed to get about that much in my use. Charging them is simple enough with a Lightning port built into the cable as well. I do miss the charging case that the AirPods have, which gives me approximately 29 hours of charge between needing to plug into the wall. AirPods live in my pocket and are always topped up because they live in their charging case, and I charge the case maybe once a week. The BeatsX meanwhile had to be plugged in every couple days because the case is just a silicone sleeve, not a charging case.

Again, not bad by any means, but it felt like a downgrade from AirPods.

I didn’t use the BeatsX on a run, but they are designed to be sporty earbuds. Unlike AirPods, they are advertised as being sweat proof, which makes me more comfortable about going for an intense workout with them in my ears. I am currently rolling the dice with AirPods by using them whenever I run (usually 2x a week). So far I haven’t had issues, but they are most definitely not sweat proof.

I didn’t expect these headphones to replace my AirPods, but I wanted to see if there was something I was missing out on by using just AirPods for all my headphone needs. While there may be a pair of headphones out there that I would enjoy more than the BeatsX, I don’t know if anything could beat the AirPods right now. AirPods have a laundry list of little touches that make them an absolute joy to use, and they are almost all things that a generic Bluetooth headset just isn’t going to do as well as something made by the same company that controls the software on my phone.

These are being returned today, and I don’t think I will miss them at all. I could see why someone would like them, but they weren’t for me.

My Perspective on Tech

While BirchTree is not my day job1, it did play a central…

Why Can’t a Flagship Phone that Costs Over $700 Stay Fast?

When a great, fast phone starts to lose its zip after a…