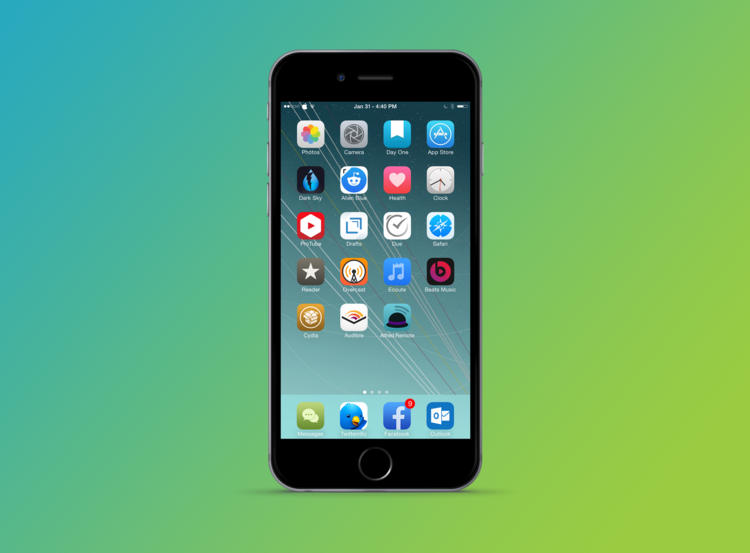 I used to think that I needed to really prep my phone for these features. I used to think that I needed to have a cool background, and a nice theme to write about, but I really don't. All that does is give a misguided impression of how put together my tech life is and, if done well, set a silly standard that everyone thinks they need to live up to. So this month, I snapped a quick screenshot of my home screen and it is what it is.

Also, I just noticed that I forgot to do a post at the start of January. Oops!

First things first, I've jailbroken my phone since last time we talked, and it looks different in whole new ways this month. Might I recommend watching this video to see what tweaks I am using to make my phone a little more personalized.

Since jailbreaking required me to restore my phone, I had to start completely fresh and install each new app one by one. This made me more choosy on what got first page billing, so there are some definite changes.

First off, three of the apps in my dock changed. Three!!! Tweetbot it was replaced by Twitterrific, Paper was replaced by Facebook, and Mail was replaced by Outlook. Twitterrific just released version 5.9 which addressed a lot of the problems I was having with earlier editions. They also have a better iPad app, so I'm getting a more consistent experience across both devices. Paper got the axe after I noticed I was not getting a ton of Facebook notifications that I would have liked to get. The official app isn't as nice-looking, but it gets me the information I need. And the biggest shocker is that I'm using a Microsoft app in my dock. What a world! My review is coming this week on this one.

Other eliminations were Instagram, Evernote, Byword, Google Maps, Pushpin, and Things. That's 9 casualties in just 2 months. Ouch! But let's get mor positive and talk about what apps won their way into my heart and onto my home screen.

Due - This has been a productivity revelation for my iPhone. The killer feature here is that Due does not leave you alone if you try to ignore one of its alerts. If you set a reminder to “work out" at 7am, and ignore it, Due will alert you again at 7:05, and then at 7:10, and 7:15, 7:20, and on and on until you DO SOMETHING. Some people hate this, but I love it. It makes me at least address the thing that I said I was going to do, even if that is delaying that alarm for another time. Any action is better than purely ignoring it.

Cydia - This is pretty much a requirement if you jailbreak your phone. It's the equivalent of the App Store for all jailbreak software. It's on my home screen because I'm trying new stuff out all the time. By the time I would demote it to page 2, I'll probably be bored of jailbreaking and it will be gone anyway.

Alfred Remote - This is the coolest, most mysterious app released in 2015. I love the Alfred developers, and I laid down $5 for the app right away, but I haven't figured out exactly what I want to do with it yet. Thus far, I have some very basic actions set up, but nothing that's changing my life. I have to make a point of searching the Alfred forums and see what other people are doing with it. There’s so much potential here, I just need to figure out how to use it.

Beats Music - I saw some people raving on Twitter about the playlists they were getting in Beats, and I decided to jump in for one more month. The playlists are so damn good! I enjoy Spotify, and iTunes Match fulfills my old man insistence of maintaining an MP3 collection, but neither of them make as good recommendations as Beats does on a daily basis. Every time you launch the app, you're presented with a playlist you'll probably like, and 2 albums that always make me go "oh yeah, I love that album!" It makes me love music more, which is quite the accomplishment for an app.

Audible - I want to read more books in 2015 than I did last year, and with 2 hours of travel time every work day, Audible is how I'm going to do it. I really like audiobooks, and just wish there weren't so many great podcasts to listen to right now. Overcast definitely gets more of my time right now.

Data Density on the iPad