The Google Pixel 2 is sporting a 5 inch OLED display, and the iPhone 8 Plus has a 5.5 inch IPS LCD display. They both have a resolution of 1080x1920 and have generally been praised by critics for their quality. I’d agree with those assessments, as both of these phone look very nice. But each of them has a specific benefit over the other.

The iPhone 8 Plus gets noticeably brighter than the Pixel 2. For comparison, I turned off most of the lights around my desk and took some high speed pictures of both phones displaying a completely white image in the web browser.

iPhone is on the left and the Pixel is on the right. No, I could not get a high speed shot of the Pixel 2 without it showing bands like that.

You an see 2 things here on why the iPhone takes the cake when it comes to brightness an color. First, the iPhone is noticeably brighter than the Pixel here. It’s kind of subtle in the above image, but the iPhone gets brighter. Both get bright enough for me in almost all situations, but if we’re comparing them, the iPhone is brighter. Based on my highly unscientific test of checking average brightness across the image (not counting the dark bands), the iPhone is 20-30% brighter.

Second is color reproduction, and the iPhone wins here with its True Tone display. The image looks yellower in the image above, but in real life that screen looks more white than the Pixel. The Pixel looks more blue and more artificial. Note that I tried the same test with True Tone turned off on the iPhone and the brightness difference was about the same.

And of course we have viewing angles, and while the Pixel 2 XL is getting all the headlines around its blue tint at off angels, the Pixel 2 is not immune. Now I should say this is the bluest the phone gets, and it’s not noticeable in day to day use, but I can see it ever so slightly when I’m using the phone in the dark. Again, it’s not big deal, and it’s really a non-issue, but it is a thing.

On the other end of the spectrum, the Pixel 2 absolutely kills the iPhone when it comes to darks. This is an inherent benefit of OLED, and the new iPhone X should do this too, but here’s what the 2 phones look like from the same angles with a black image displayed at full screen, and each screen turned up to 100% brightness. 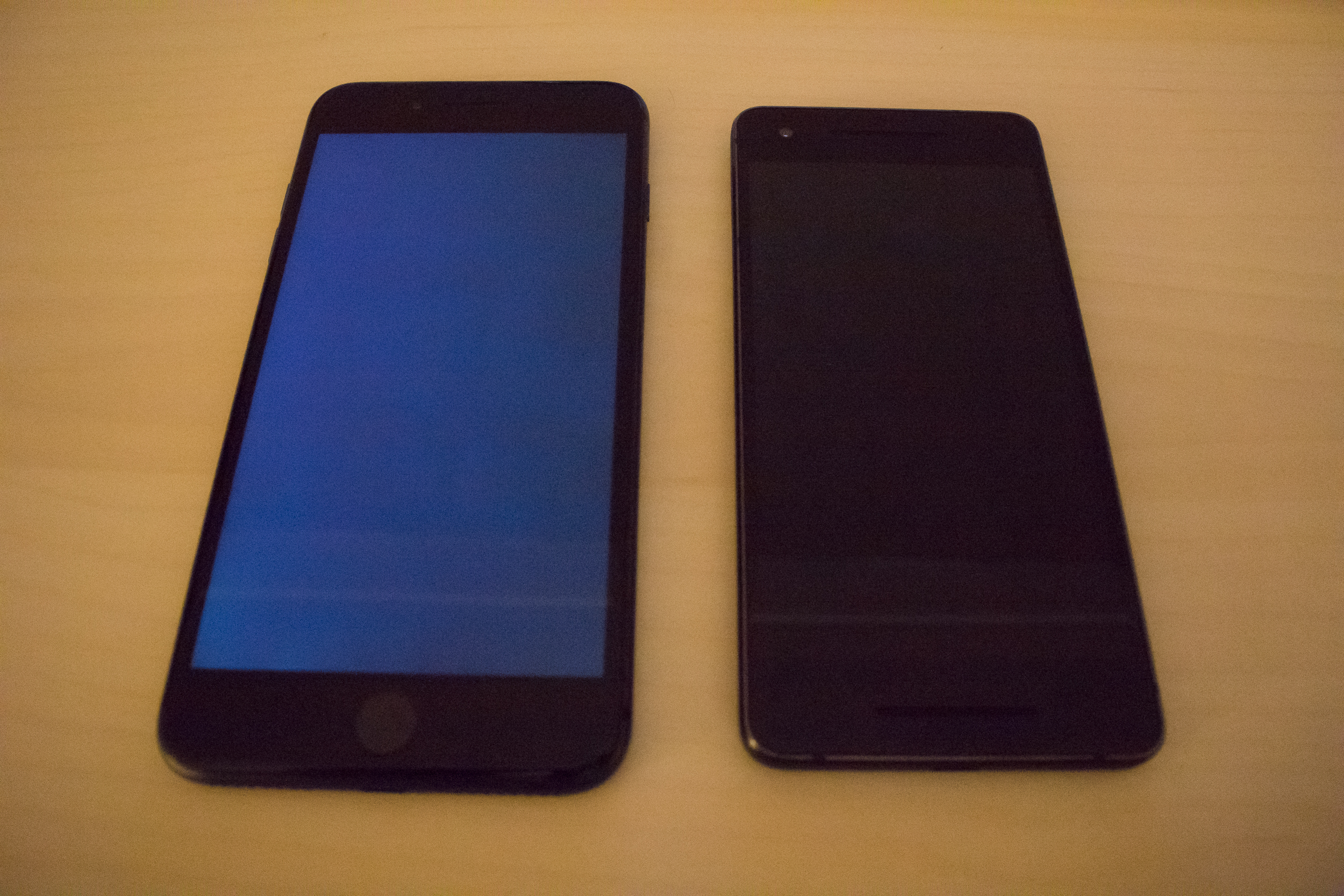 I took these as slightly slower shutter speeds because you couldn’t even see the phones if I used the same 1/1200 shutter speed as the first pair of images.

Pretty great on the Pixel 2, right? The screen on the Pixel looks like it’s completely turned off, but I assure you it is displaying an image and the screen is set to full brightness. The wonderful thing about OLED is that if I turned the screen off and took that picture again, it would look exactly the same. It’s a massive difference, and one that makes me very excited to have OLED in the iPhone staring today.

In addition to the black levels, the iPhone also shows a little bit of a gradient in how black that black is. It looks perfect head on, but at an off angle you can see it’s not quite as perfect.

This is by no means a full display comparison of these two phones. There is much more to look at when judging a phone’s screen, but the differences on both the bright and dark ends were so striking I just had to share.

What “iPhone lover” means to me

I’ve written 3 major phone reviews in my time at BirchTree:…

What happens when you try to charge your iPhone wired and wirelessly at the same time?