Sometimes people suggest you can just pinch-to-zoom and get basically the same result with smartphone cameras. I very much disagree, and used this shot to see the difference. 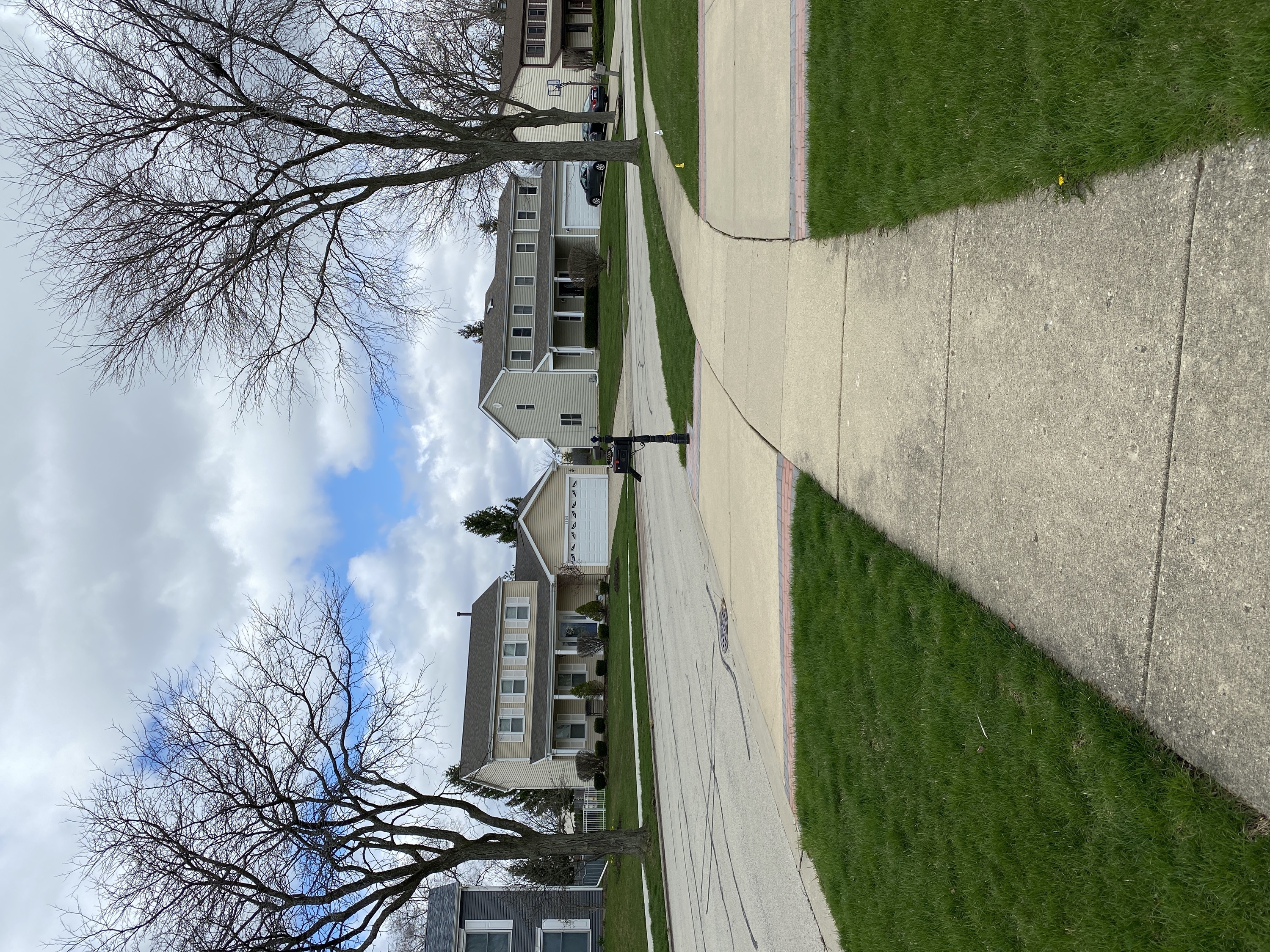 I'm standing a ways away from the mailbox and tapped to focus on it in all of these shots. Here's the iPhone's difference between 1x and 2x zoom when you look at the details: It's not even close! It may still not be that big of a deal for you, but it is for me, and the difference is massive.

But how well does this stack up to the Pixel 4, which also has a zoom lens? Well first, let's compare the details at 1x. 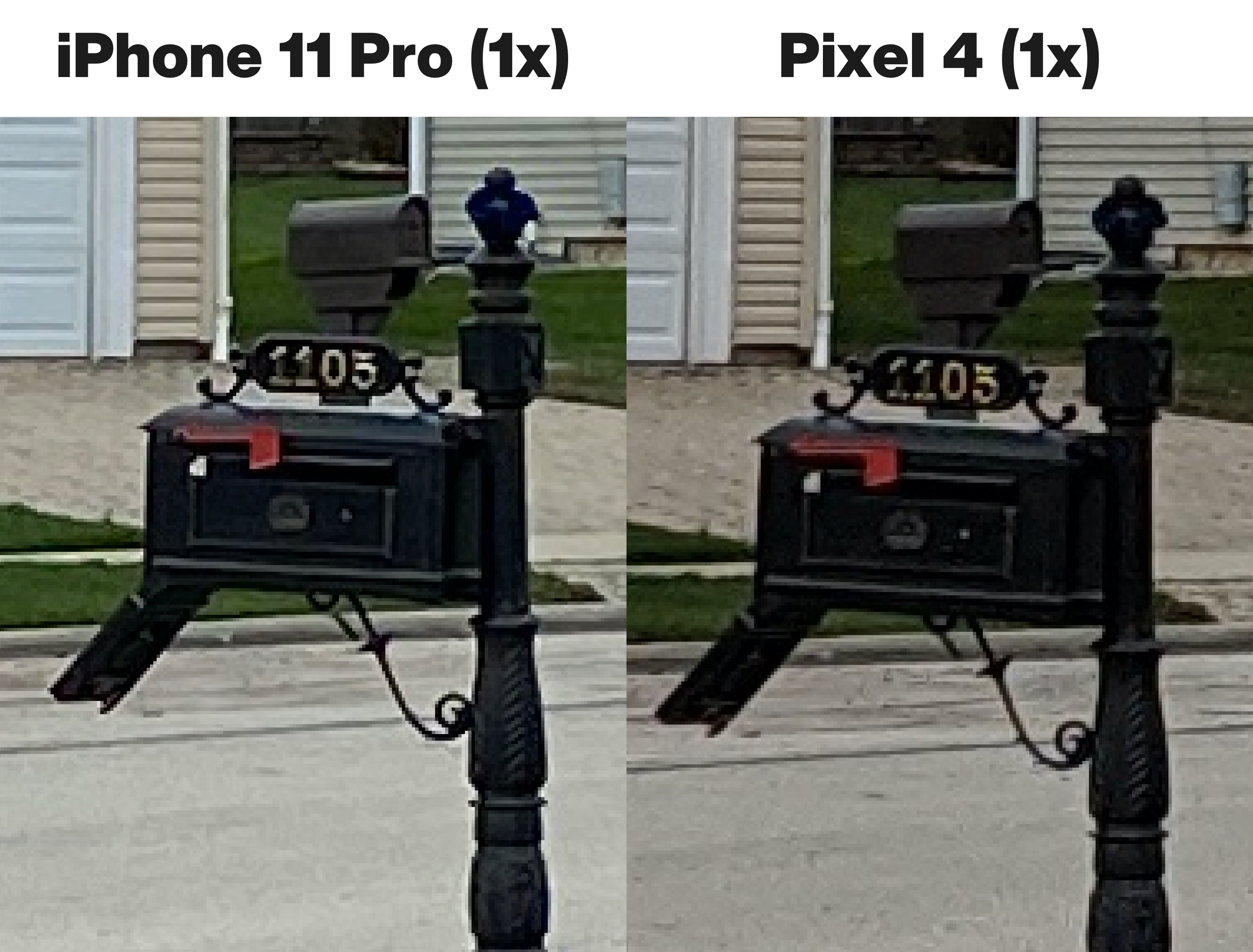 In terms of detail, I think these are identical. I prefer the colors a little on the iPhone one, but that's another conversation. In terms of capturing details, there's no real difference. 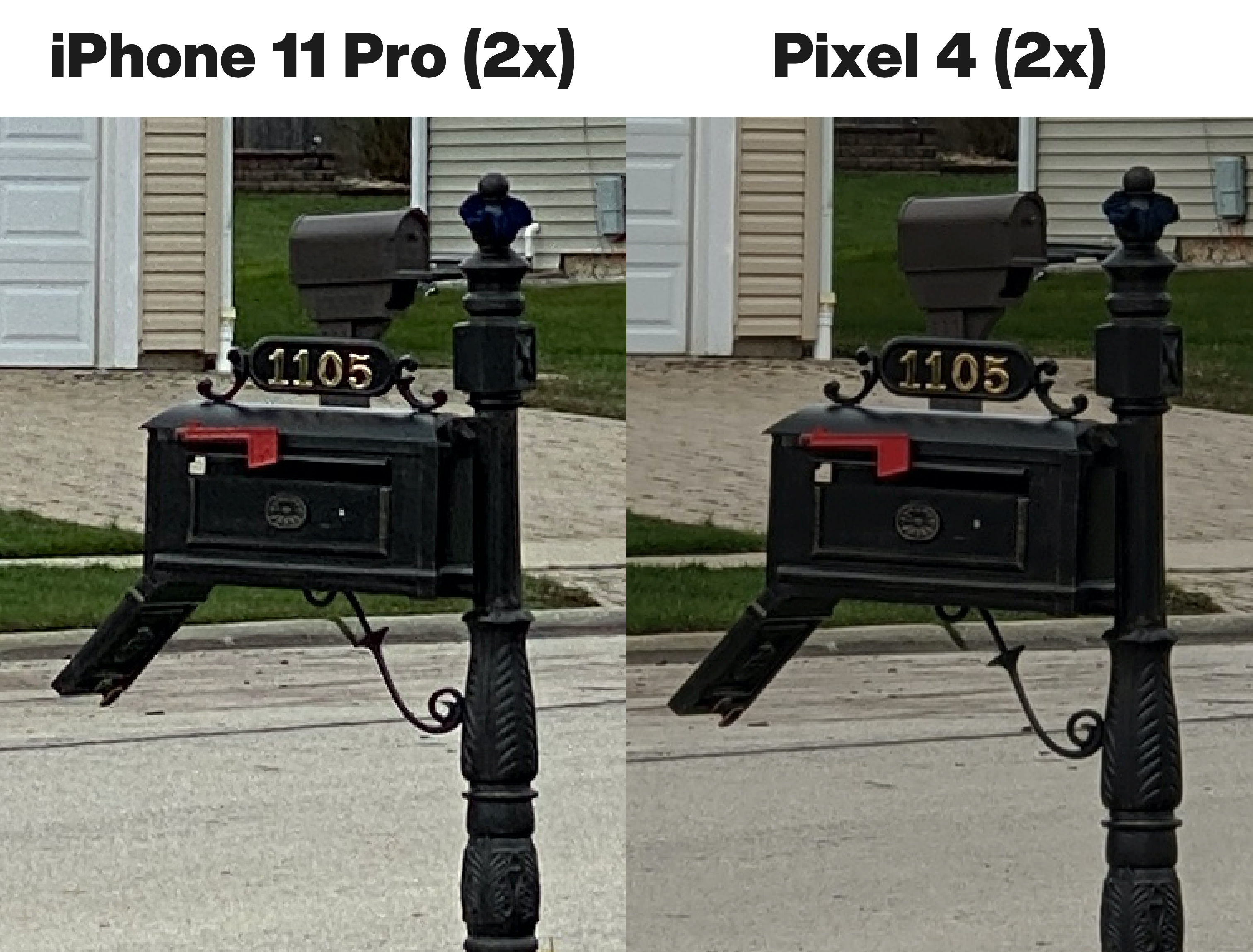 These are also pretty similar, and while the Pixel shot looks a little better, it's because the image processing is doing some more agressive noise reduction, not that it's actually capturing more data. One could certainly argue that for most people this is preferred though, and I tend to agree.

Which brings us to the 8x SUPER ZOOM SHOWDOWN…ahem, the 8x zoom test: 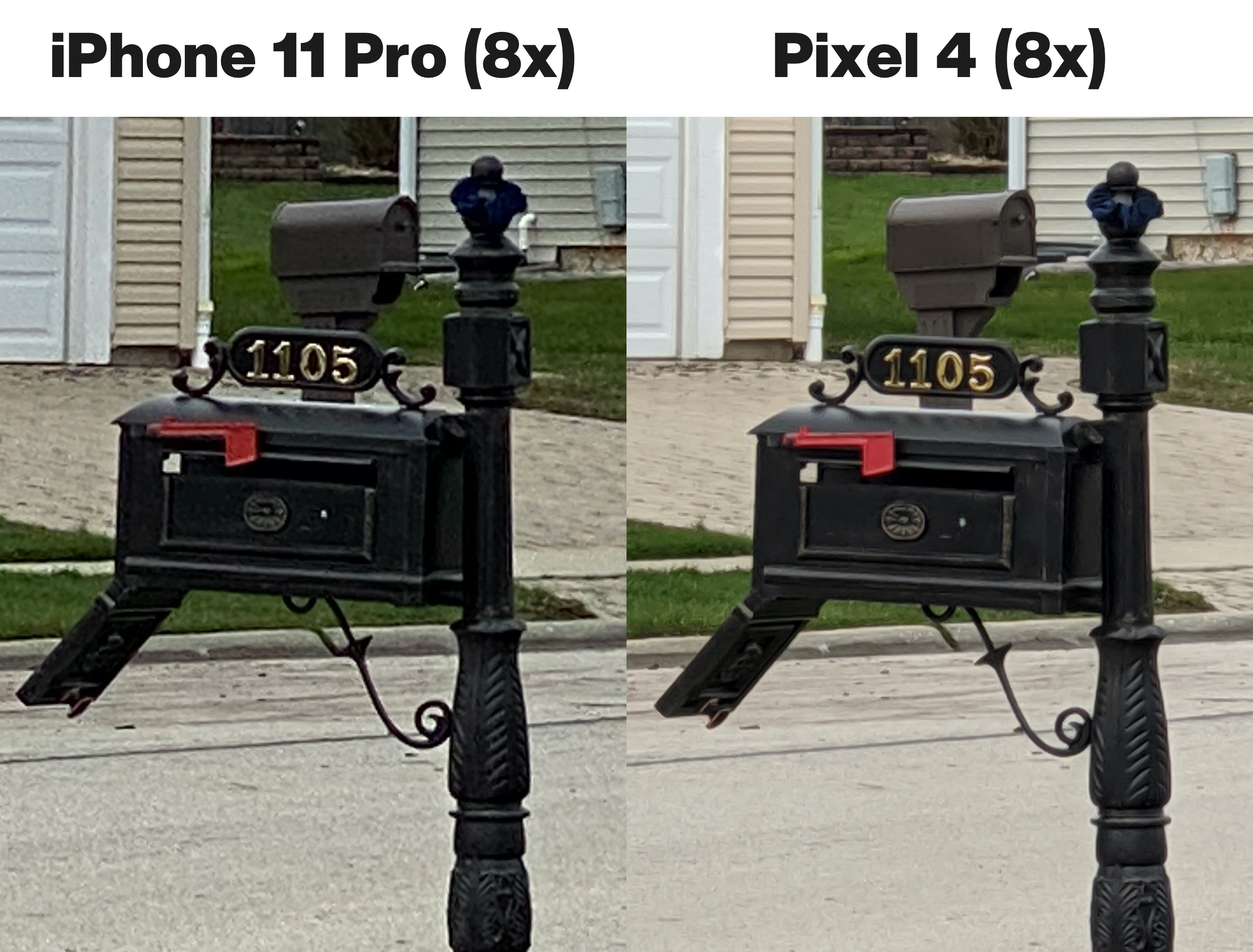 Amazingly, even though it's entirely digital, the Pixel takes a massive lead here, which an image that is cleaner, yes, but also has more detail. This is a pretty remarkable difference, and it shows Google's big talk around enhanced digital zoom is no joke.

And in case you're thinking "it's just the same as the 2x shot, here's those two side-by-side. 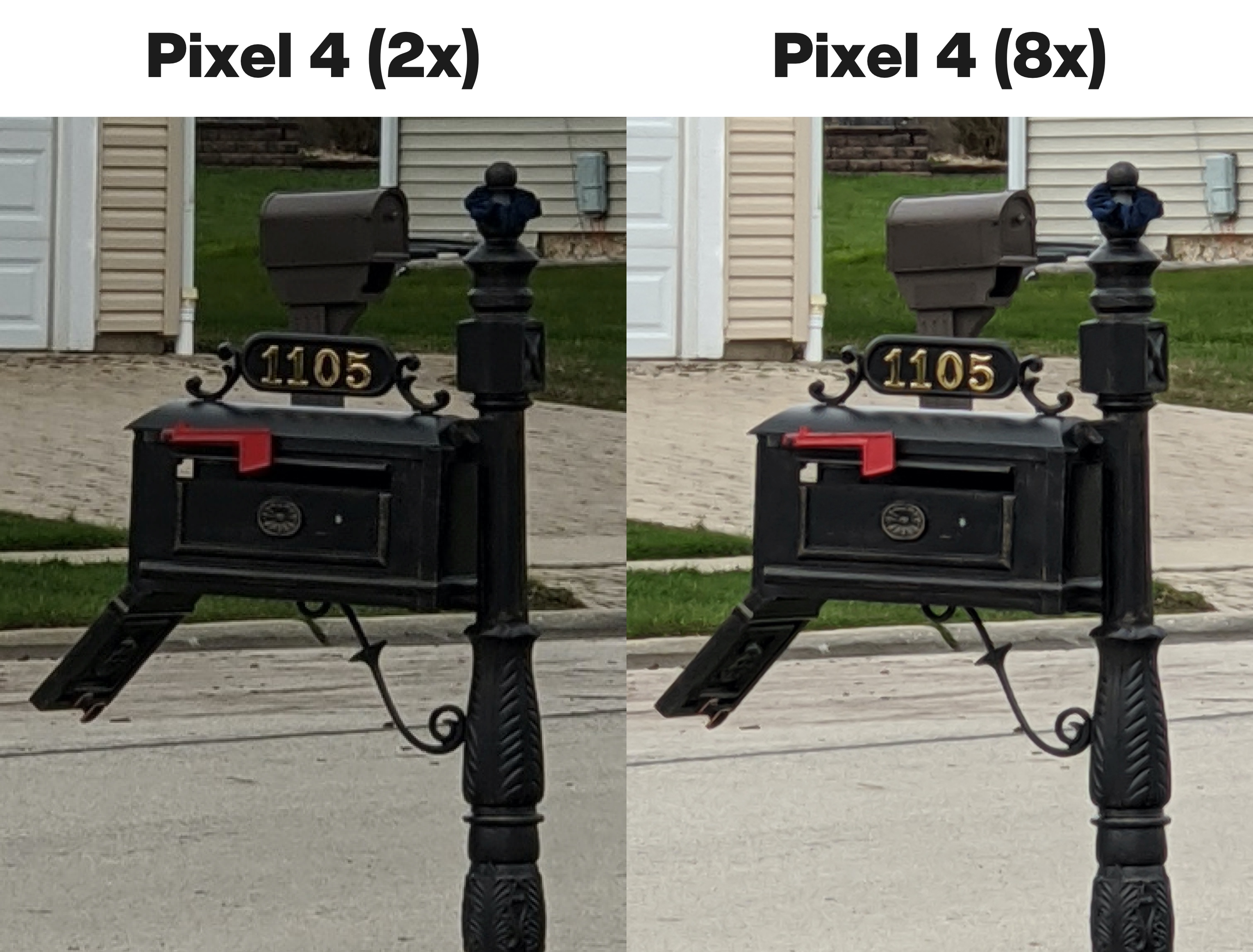 The image quality is genuinely better, and while it's a little soft, it's still very, very good for a phone.

Google gets top marks from me in their ability to do zoom better than the iPhone, especially at anything past 2x.

Today at Apple (at Home)

Deep Fusion Tested Against a Pixel and Galaxy