ProTube Review: A Better YouTube App for your iPhone

ProTube ($1.99) aims to be the YouTube app that Google would make if they had any interest in you escaping the Google ecosystem. Google's own YouTube app is actually quite good. It's ability to multitask (within the app, at least) with a video playing is very cool, and everything is very responsive and easy to use. However, there are some key things that are a constant headache for me when I use it. Jonas Gessner has done a great job making ProTube something that addresses those concerns.

My biggest concern with the standard YouTube app is that there is no way to get your videos out of YouTube and into whatever app you want. Yes, you can share a video to Twitter, Google+, Facebook, or an email, but what if you want to do something else? What if I want to save a video to Evernote to reference on a trip I'm making soon? What if I want to save one to Pinboard to watch on my desktop at home? And what about using a custom script to download the video to my Amazon S3 storage for archival purposes? These are all things that ProTube allows since it uses the stock iOS share sheet. It's been marvelous to be able to freely manipulate my YouTube feed from this app.

My other concern is that Google always wants to throw you on the "What to Watch" page. I really don't use this page often (if ever) and spend most of my time in my subscriptions feed. ProTube has all of the curated pages here as well, but it has the common curtesy to ask me what page I want to see when I launch the app. And it's not just 2 or 3 options, I can choose from any of 19(!).

Beyond my personal vendettas, ProTube has some other little delights that make it something special. First off is design; this app just looks good. They went with a sharp white and red color scheme that both is reminiscent of YouTube and doesn't blend in with the crowd. I'm also a big fan of the hexagonal icons used throughout the app and make it feel quite unique. Add on top of all this a beautiful font, and you have one of the better looking apps on all of iOS, which really is saying something.

There are some nice, subtle parallax effects on the image elements inside the app. I think they're tastefully done, but those who are more sensitive to this motion may not appreciate it as much. These effects won't be present if you have the system setting switched to "reduce motion," but there is no way to turn them off from within ProTube's options. 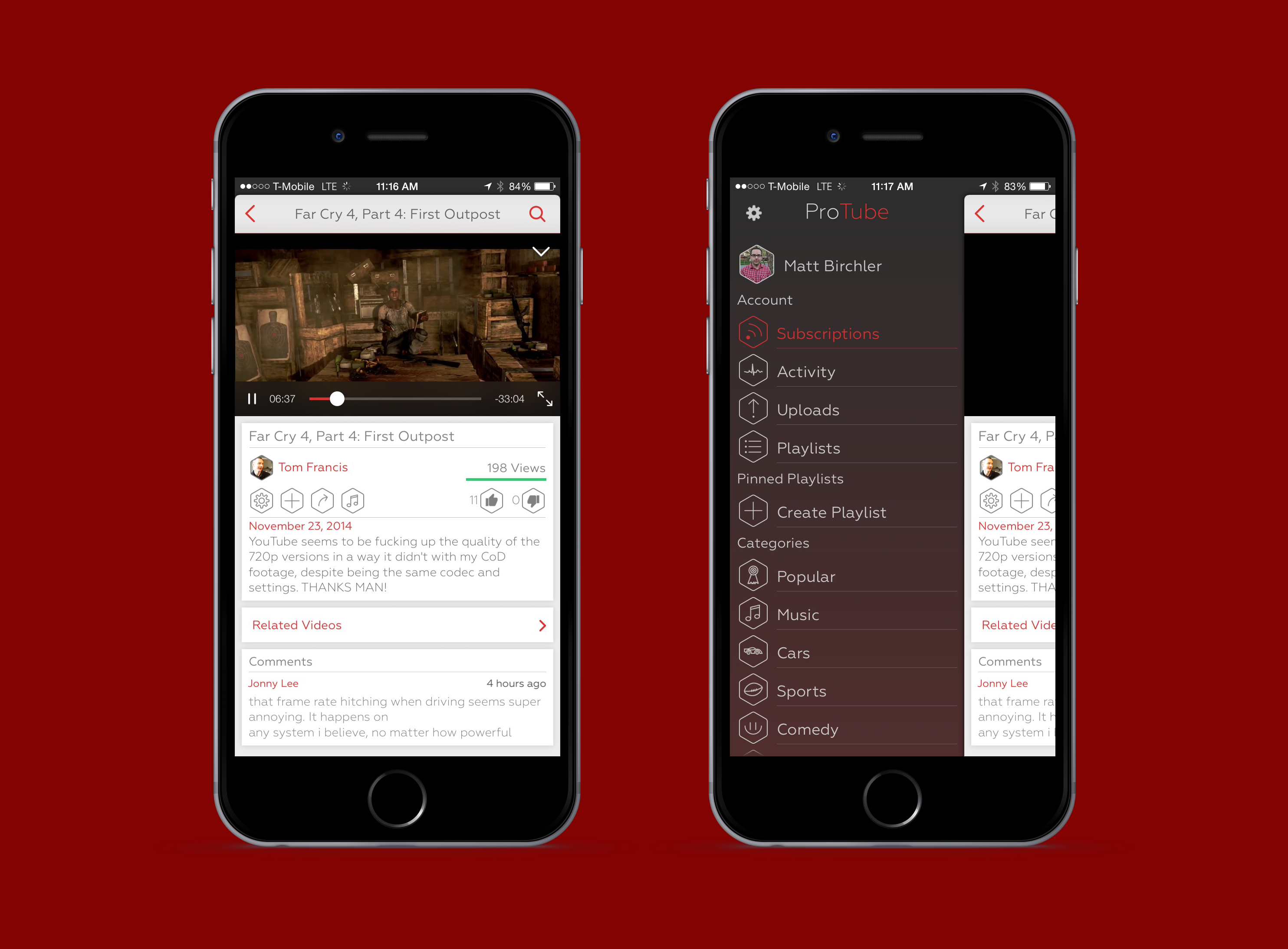 Another thing I love is that there are no video ads in the app at all! I know some may balk at this form of ad blocking, but from a user's perspective, it's wonderful. I find sitting through video ads even more annoying on my phone than on my computer, so this trick is one that I, and I think a lot of other people would, find worth the $1.99 price tag alone.

And then there are the tricky little things you can do with videos. First, you can play all YouTube videos, even those ones that say "the content provider has decided not to let this play on your current device." You can also convert any video into an audio track so that you can play it in the background while you do something else on your phone (great for people who listen to music on YouTube). You have the ability to select your playback quality and then throw your video onto an Apple TV or Chromecast. And that in-app multitasking I was praising the YouTube app for in the intro? Yup, ProTube has that as well. In fact, it even gives you the ability to resize and move the video around the screen wherever you'd like it. Overall, ProTube gives you a little more control over YouTube than I think Google would like. 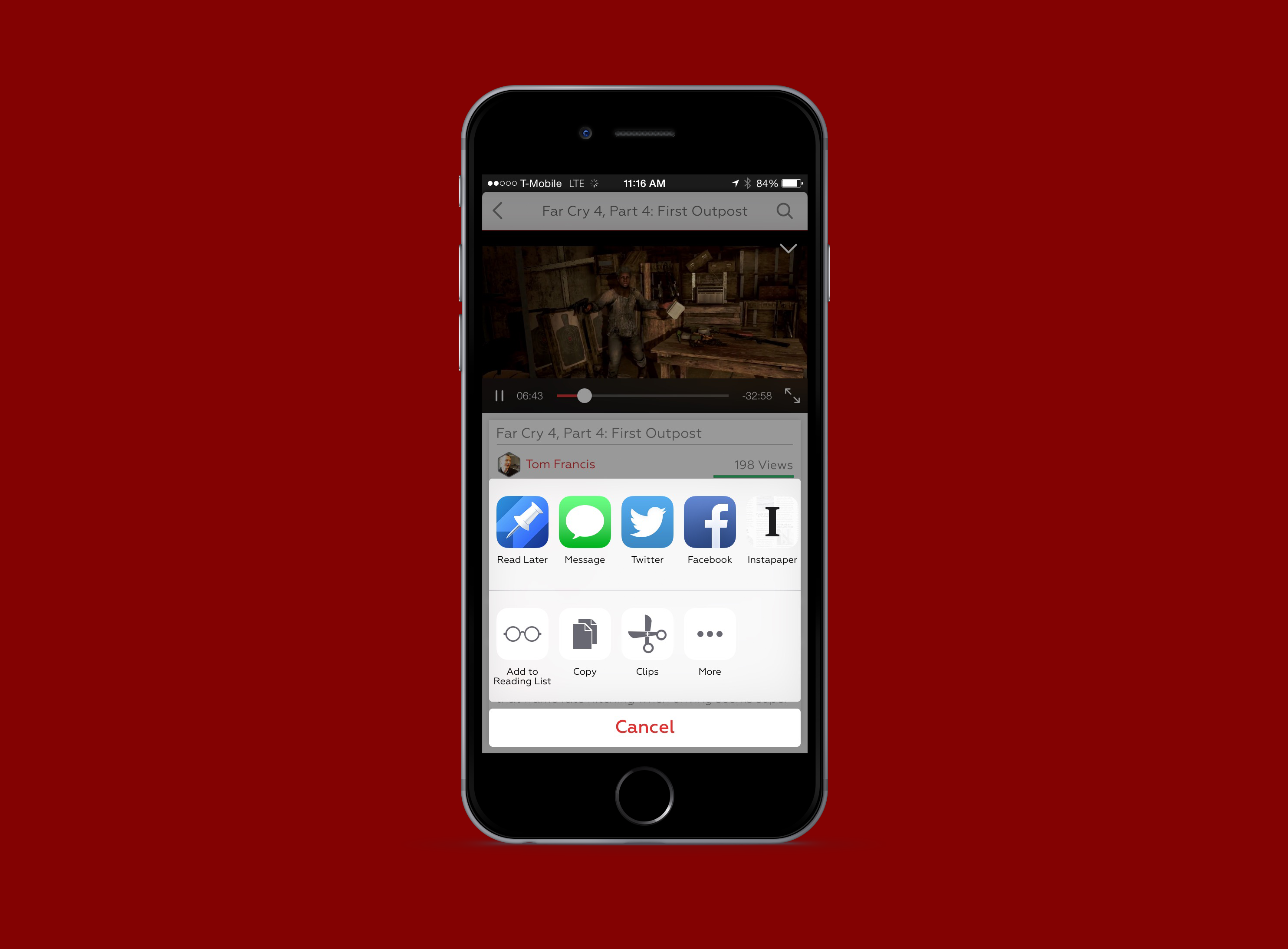 One thing I don't really like about ProTube is its list views. I see what they're going for by making the content front-and-center, but that sometimes means that the list of videos I'm scrolling through is a mess. After a few days with the app, I've gotten better at reading text on insane backgrounds, but I would prefer some adjustment to this for version 2.1 of the app that will legibility a higher concern.

I also like the idea of being able to save a playlist of videos for offline viewing, but I have thus far been unable to figure out how to do that. It clearly states it as a feature in the app description, so I know it's there somewhere, but it's not obviously accessible. I'd be more than happy to eat my words here if someone could enlighten me!

At $1.99, ProTube is a fantastic deal for anyone who uses YouTube a lot on their iPhone. Simply put, ProTube is a joy to use. It is one of those apps that strikes a near perfect balance of ease of use, beauty, and power features.

Using an app like this is always a little risky. YouTube could change something tomorrow that completely breaks this app, and there's nothing I could do about it. Still, I think it's a risk I'm going to run, because this app is amazing.