The Apple and Google News Cycles

It hit me recently how Apple and Google have vastly different strategies for how they address the news cycle throughout an average year. Here’s how they work in my mind: 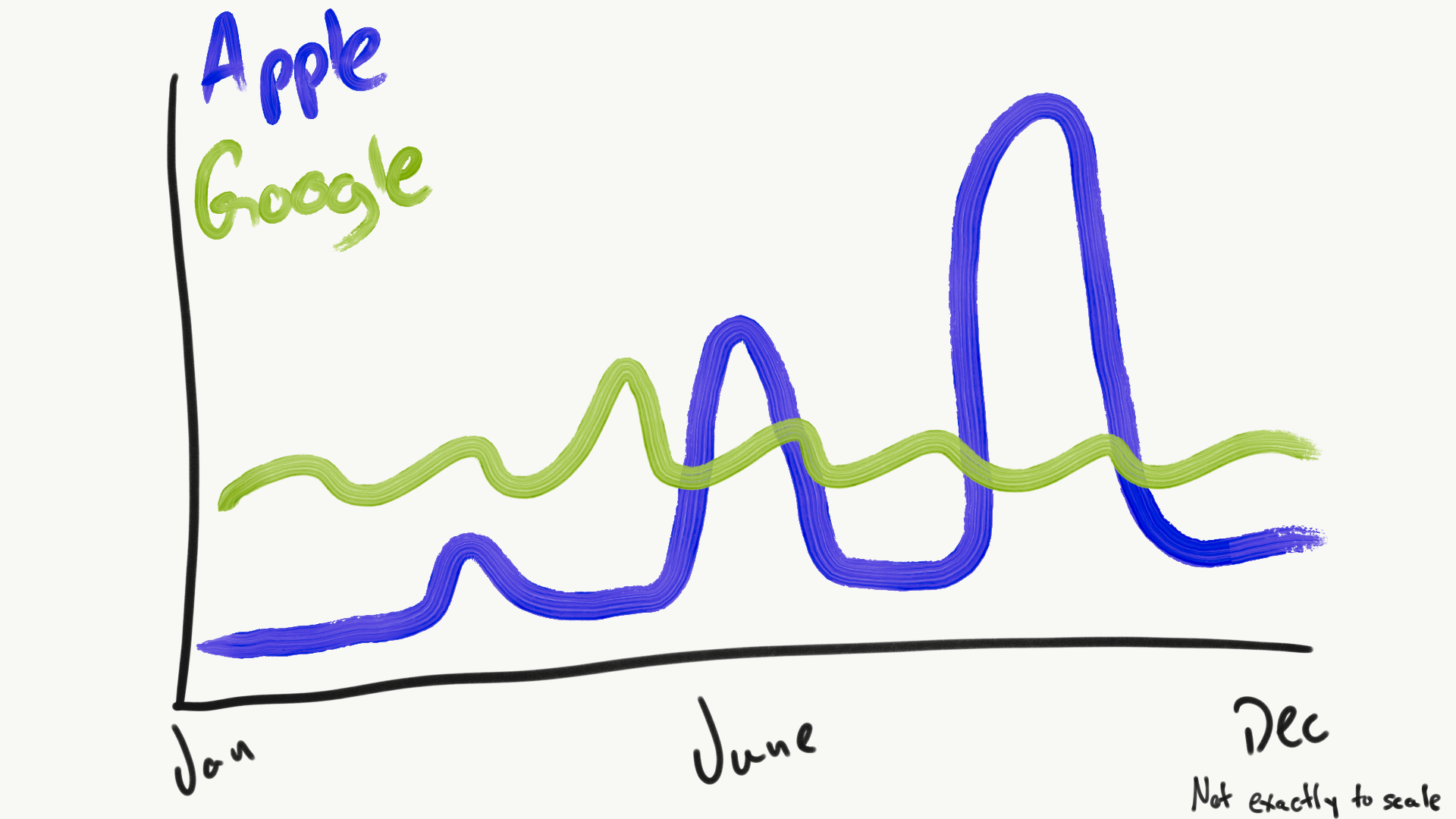 Apple really focuses their efforts around a few events every year: something small-ish in March, WWDC in June, and iPhones in September. Besides that, the company does very little in terms of new products or features. Things like Final Cut or Logic will get updates off this schedule, but most of their consumer-focused products are changed around these 2-3 time periods.

Meanwhile, Google has their I/O conference in May, but they also roll out new features and products throughout the year. Looking back on the last 7 days of Android Central news, I see that Google announced 20+ new languages coming to Assistant this year, their YouTube Live feature is getting IFTTT support, released a Slack competitor, and Google has worked with Dropbox for Google Docs integration. That’s not to mention all the Android phones announced at MWC last week that are intrinsically Google news as well.

Apple is great at public relations so I don’t mean to imply they don’t know what they’re doing. I am trying to understand why we in the tech community are always high on Apple in the summer/fall and cool off a bit by the winter/spring. In an industry that lives on daily news, Apple’s concentrated time frames for new products and meaningful software updates can make them seem like they’re not moving forward. In June we all fawn over the new offerings from the company, and developers have their hands full with updating their apps to support the deluge of features for all of Apple’s platforms. Then from October through March (or even May) we get next to nothing new from the company, leading to headlines like “Apple is falling behind at X.”

I just thought it was interesting to think about the rolling boil of news Google tends to have, with things continually being updated and changed throughout the year. No single event or release is as big as what Apple does, but the consistent drip-drip-drip of news and feelings of “newness” make them feel like they’re always trucking forward. On the other hand, Apple’s explosions of news and updates a few times a year means they generate more excitement up front, but we can lose that feeling in the long tail between events.

They’re not going to change overnight, but I think it would be interesting to see what the Apple news cycles looked like if they spread out their announcements more throughout the year.

HomePod Issue? Just Turn it Off!

Apple is Losing the “Siri works in more languages” Advantage