Mac Performance has Stagnated, and the iPhone and iPad are Catching Up

We are all familiar with the MacBook Pro drama going on this year. I've weighed in a number of times, and I've heard from people who agree and disagree with me, and both sides are equally passionate. The more I mull over this situation, the more it seems like it's an emotional response as much as it is an objective look at the state of the Apple's pro laptops.

The primary concern I'm seeing with most people is that the new Pros are underpowered. Speed starts with the CPU, and Apple is getting a ton of criticism for putting in CPUs that are hardly any faster than the last year's models. Felix Schwartz looked at the numbers and was not too pleased that the new MacBook Pros are only 8-13% faster than the 2012 MacBook Pros in benchmarks. This is an understandable concern, but not exactly a new one for the MacBook Pro line. Here's the multi-core GeekBench scores of the top of the line MacBook Pro each year since 2007: 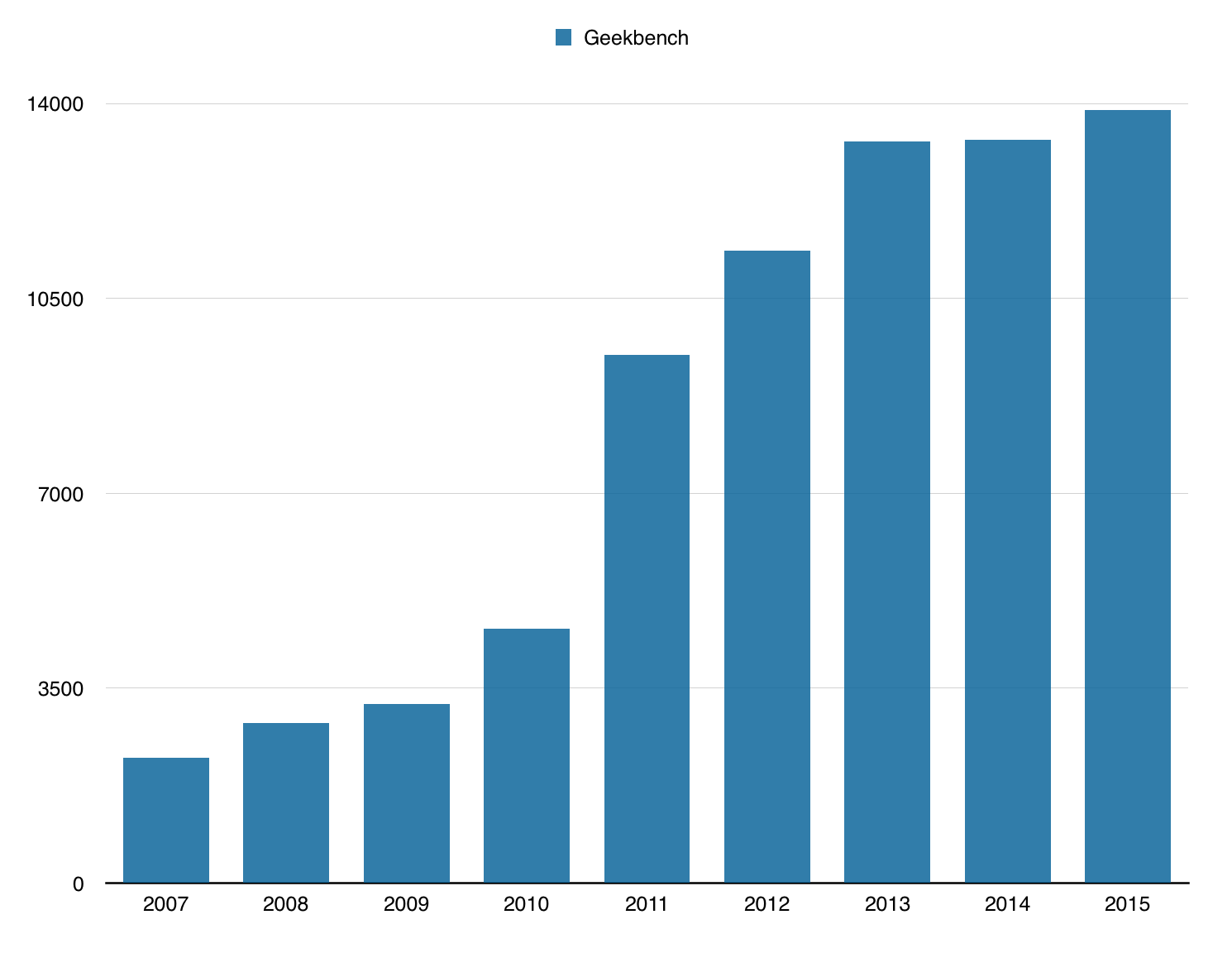 These are all Intel machines, and the biggest jump was in 2011 when the Pros got quad-core processors for the first time. Since then we've had a couple years of decent growth, but it's basically leveled off at this point. We can be upset with Apple for skipping an Intel generation but to act like performance gains in the notebook CPU line is something new in the last 6-12 months is very short sighted. For most tasks, and 2012 Intel chip is going to do you just as well as a 2016 chip.

For a point of comparison, here are the multi-core GeekBench scores for every iPhone since 2011's iPhone 4s: 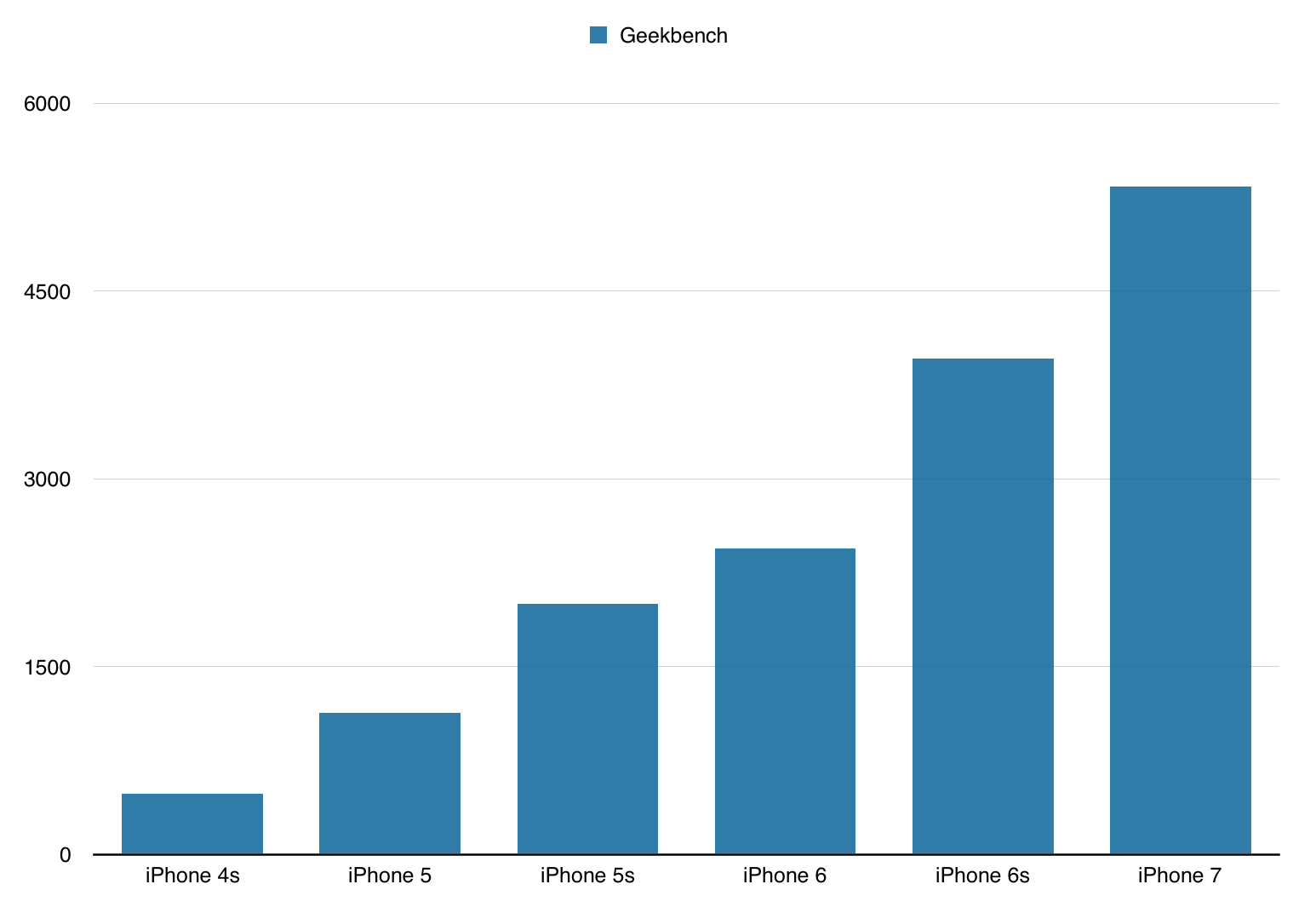 That's shocking growth on the mobile side. It's a 35% increase from last year, which is just remarkable! For giggles, let's put the latest ARM chip from Apple, the A10 in the iPhone 7, up against the last decade of MacBook Pros: 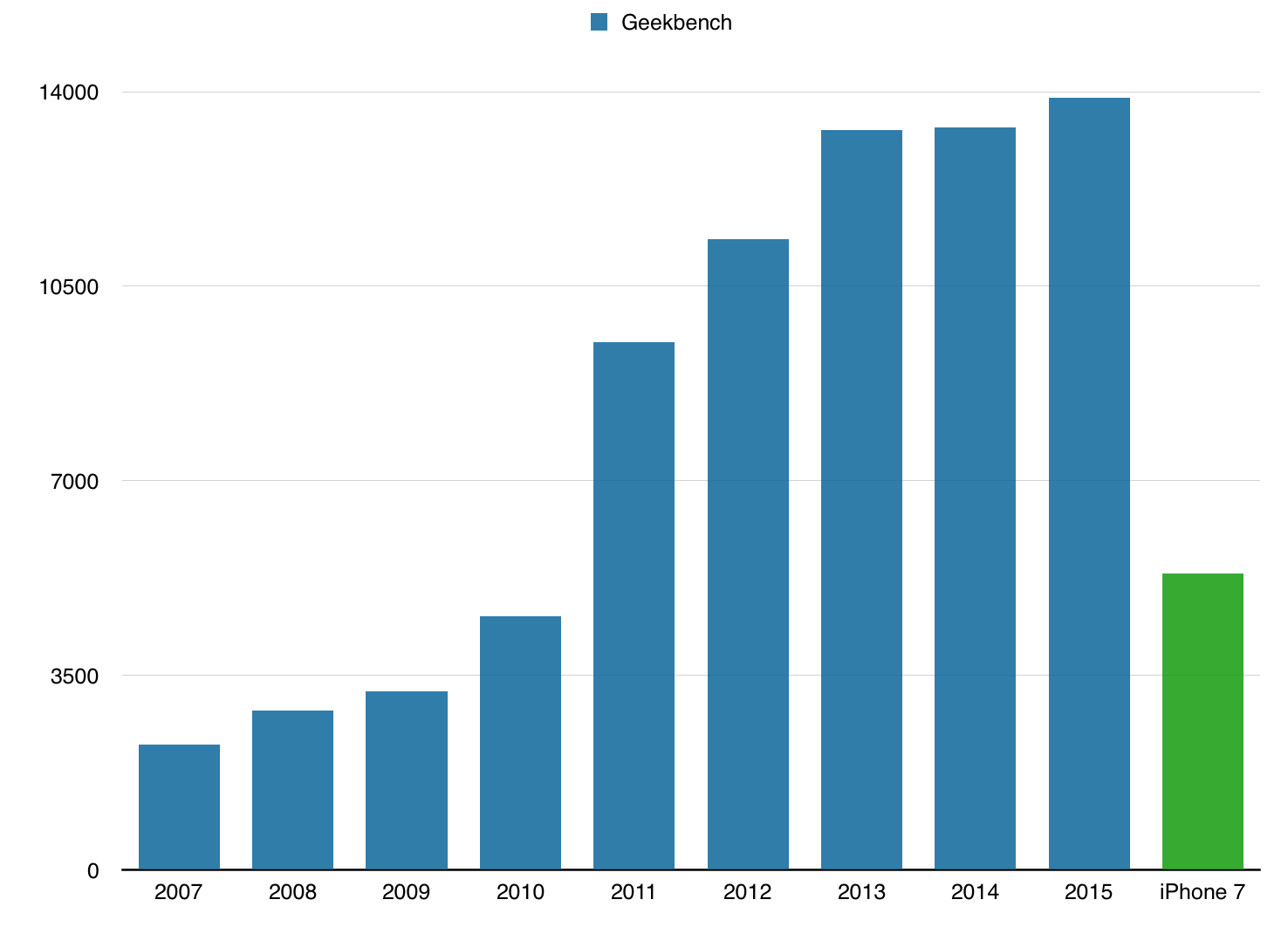 The iPhone isn't close to as fast as the current Pros, but it's faster than every MacBook Pro Apple made before going quad-core in 2011. The current iPhone is a quad-core processor, but it only uses 2 cores at a time (other 2 are for low power tasks). Imagine what sort of jump we could see if Apple can manage to stick 4 full speed cores in the next iPhone. Wow.

I contend that the incredibly aggressive performance gains we see in the iPhone and iPad, which is silicone Apple controls, proves that Apple is serious about the speed of their products. They are not in the business of giving middling specs because they don't care about their machines being competitive. I see a big problem in the speed bumps we're seeing in x86 architecture on the PC side, as there simply are not the performance gains out there that we had been used to seeing for decades.

There aren't any Geekbench scores for the top pf the line 2016 MacBook Pros yet, but I don't expect to see a big jump in performance over last year's model. That's not exactly surprising in an industry that's been living on minor performance gains for years.

NOTE: Tip of the hat to Michael Rockwell for figuring out the dual-core vs quad-core nature of the iPhone 7's A10 in benchmarks!

A Touch OS is About More than Just Bigger Touch Targets

Pinboard is on of the Simplest, Best Services I Pay For

Pinboard has been a staple of the nerdy community for years, so…