I think the iPhone will go down as the single most important consumer tech product released in my lifetime. The personal computer likely gets the edge for those a bit older than me (the Macintosh came out just over a year before I was born), but the impact of the smartphone can not be overstated, and the iPhone is the clear jumping off point.

There were Treos, and Blackberries, and Palm Pilots before it, but these products are but footnotes in the pages of history. Basically, those companies did it wrong so that Apple could see how to do it right. Tech always builds off what comes before it, and and it's sometimes hard to see where exactly one era ends and another begins, but it could not be more clear in this case: the iPhone started it all.

Rene Ritchie asked this on Twitter today and got a ton of responses:

The responses were a nice trip down memory lane, but they proved that the iPhone was as massive a jump as I just said it is. No one showed off their non-Apple phone that looked kinda like an iPhone but made by someone else, they showed off flip phones, or the smartphones of the time that as Steve said in his presentation "aren't that smart" to begin with.

Apple absolutely knocked it out of the park with the original iPhone, and to suggest otherwise is certainly a bold position to take. You can prefer Android today, but you can't look at what phones were doing before the iPhone and say that Android is not a direct reaction to the iPhone. For god's sake, look at Android before the iPhone was announced, and then afterwards: 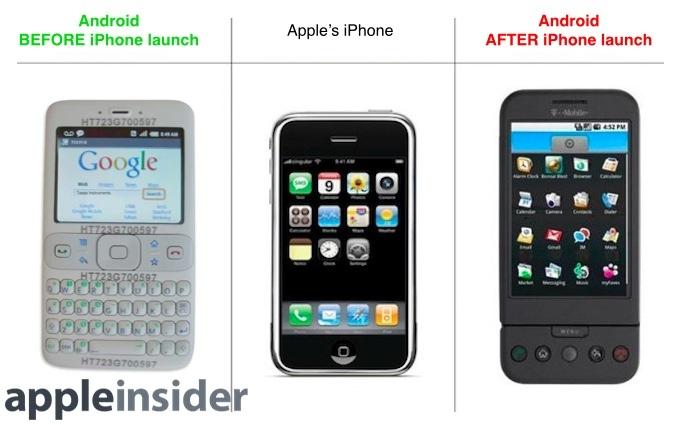 RIM (now Blackberry) had all-hands meetings the following day where people suggested the presentation was faked and the iPhone couldn't possibly do what Jobs demoed on stage.

The iPhone was such a perfect reveal and delivery on its promise that we've been fairly or not comparing everything the company does to it since then. If you told people in 2005 that Apple, the legendary company who had brought us the Macintosh, the iMac, and the iPod, was going to release something that was going to dwarf all of those combined, we never would have believed you.

Here's the full iPhone announcement, and it's worth watching, even if you're too young to remember a world without the iPhone. At the very least, watch the first 5 minutes, which is pure magic. I also really love around the 16 minute mark where Steve scrolls a list of artists and the crowd gasps.

Can voice assistants displace smartphones as the most important piece of tech in your life?