This is part 5 of a 5 part series on Android from the perspective on an iOS user.

After a month of using Android as my daily driver, where do I stand? As I've let slip a few times in the earlier articles, I did put my SIM card back in my iPhone basically at the stroke of midnight when my month was over. I'm an iOS guy, and iOS simply works better for me. But I knew that going into this whole month of Android, what I really wanted to find out personally was if Android had improved on the things that had long made it not my preferred platform. After this experiment, I'm sad to say that despite it's strides in some areas over the years, I still find Android to be a less capable, less enjoyable mobile operating system in almost every way.

I think at the crux of my position can be best summed up by how fans of each platform talk about "power" features. If you asked me to give examples of the "power" of iOS, I would bring up:

And when you ask me about the "power" of Android, this is what comes to mind:

The notable difference in my two lists is that the iOS advantages have to do with you actually getting things done with your mobile device, while Android's list is more about customizing the look of your device, as well as bringing over some more traditional PC features (file system and non-store software).

This is where Android has already lost the fight. I don't feel more capable on my Android phone because the things it allows me to do that I can't on iOS has very little to do with actually getting my work done. I do the vast majority of my work from my iPhone and iPad these days, with my Mac being the place I go to do the things that PCs are still better for. All my video and podcast work happens on my MacBook Pro because that's the better platform for those tasks, but most other things happen on my iPhone during the day and my iPad at night. And no, it's not just writing that iOS is good for. It's also where I read the news, browse the web, manage my tasks, update my website, edit photos, track things in Google Sheets and much more.

I use a utility called Rescue Time to track my computer usage, and the results of the past few months are rather telling for how my Mac usage varies. I'll be the first one to tell you "correlation does not equal causation," but the below chart at the very least shows that for the 5 weeks that I used Android as my phone, my Mac usage went way up. This is my weekly Mac time in hours for the past 20 weeks: 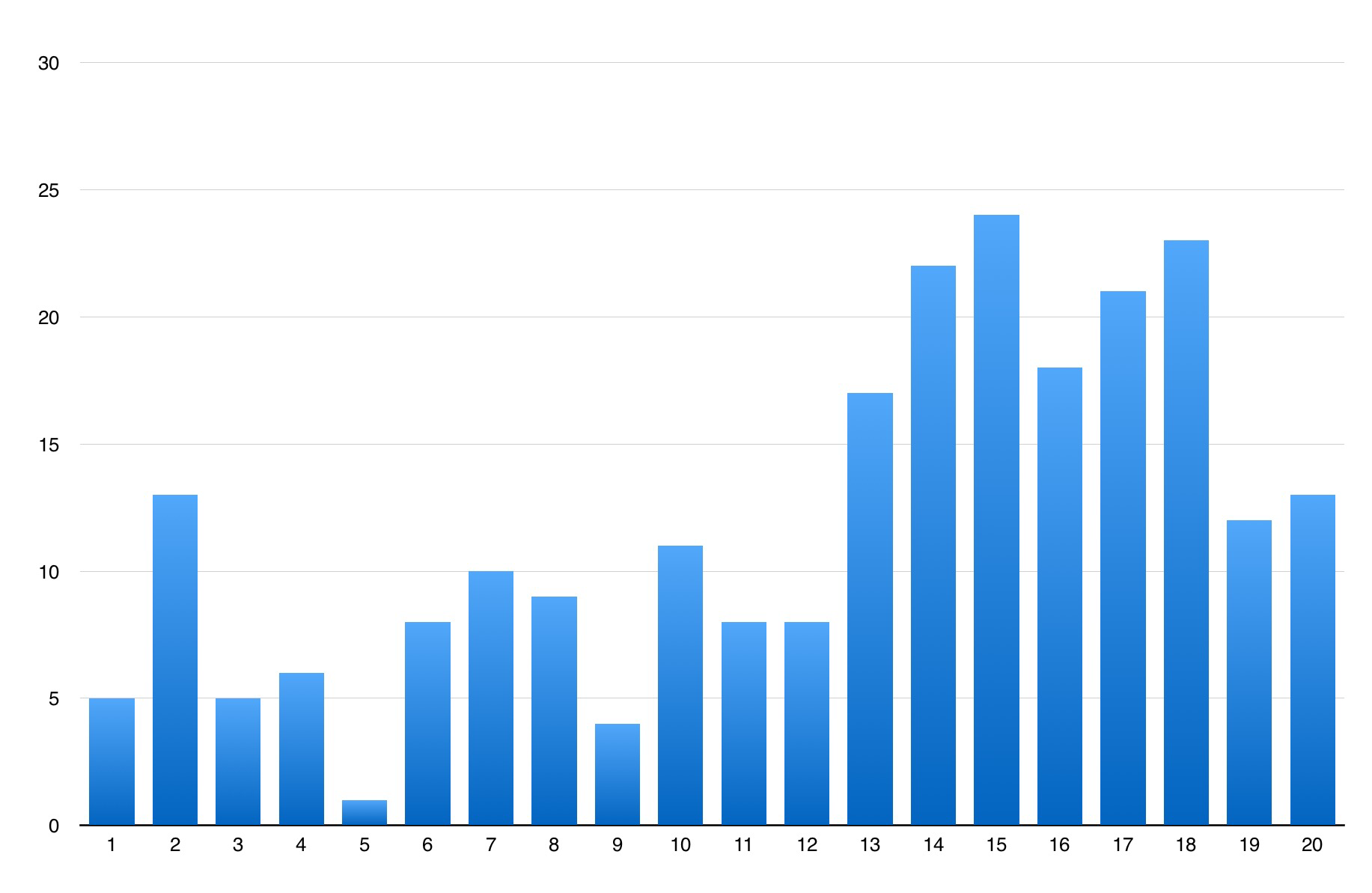 This is hugely telling for me. You can probably guess what 5 weeks were the Android weeks, but just to clarify: 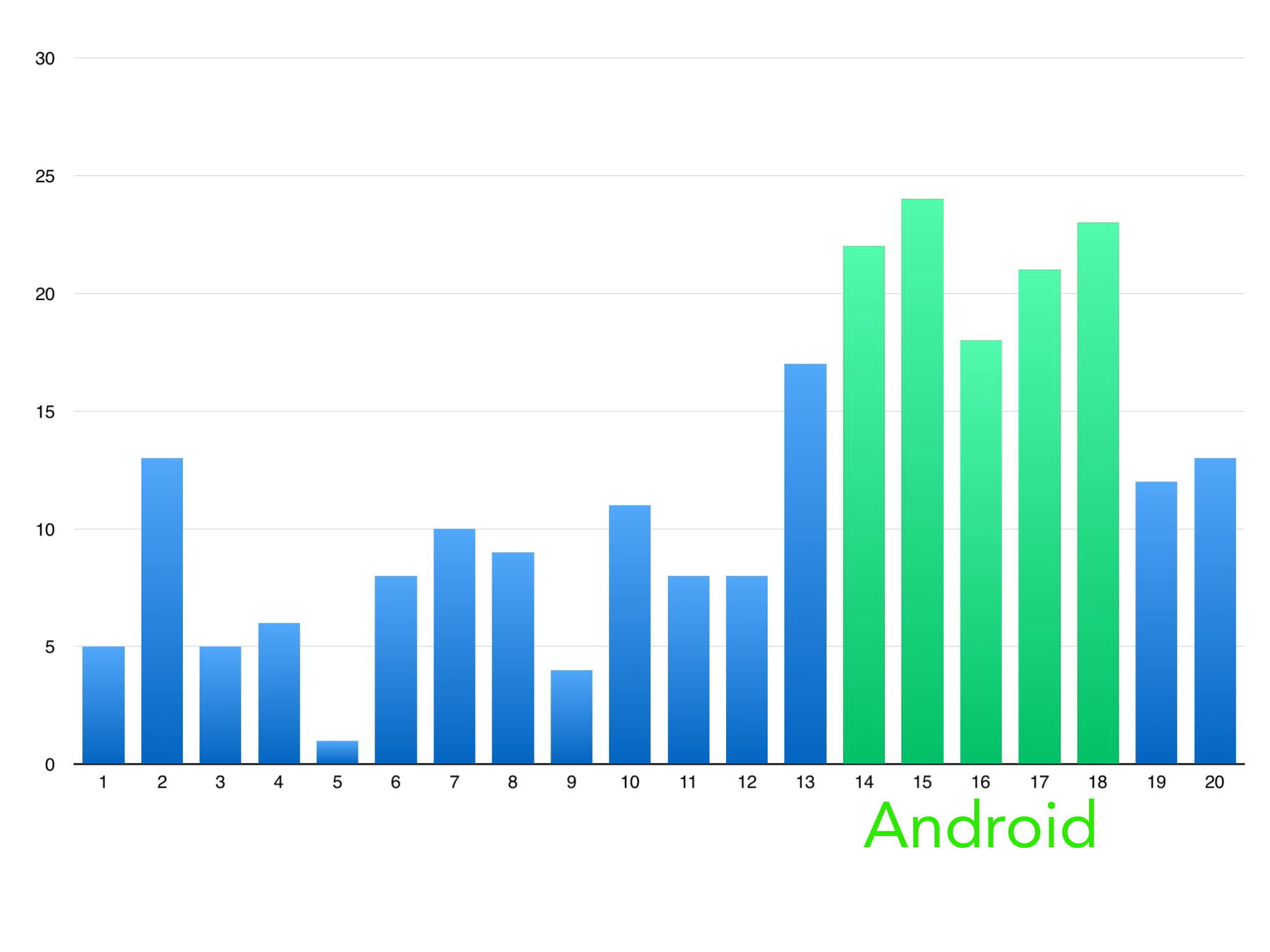 My computer usage has increased recently in part due to my new interest in video work and spending a lot more time in Final Cut Pro X and Motion, but I'm doing that just as much as before, but my overall Mac usage is still down after going back to iOS. Digging deeper into the numbers, I see that my web browsing, YouTube time, news reading, and Twitter times were the major differences between my Mac use before Android, with Android, and post Android.

This data confirms what I was only feeling when using Android: I don't enjoy using it for as many tasks as my iPhone.

This is really how I still feel after my new time with Android, it is better than it's ever been, but it's not really focused on the sort of things that I expect in the personal computer in 2017. It's a solid phone platform, but the stakes feel different. It's not trying to be your next PC at all, it just wants to be a phone you can customize.

The most criminal part of the Android experience though is simply the quality of apps available for it. I spent the entire first part of this series ripping Android apart for this deficiency, so I won't go down that rabbit hole again, but know that it's a huge problem.

Finally, I was disillusioned by the fact that the power users I talked to didn't even seem to take advantage of the features that make Android unique from iOS. When looking for the best browser, I found most people use Chrome because it's the best. When looking for an email app, I kept being told to use Gmail because it's the best email app. When I was looking for a Twitter app, I kept going back to the official one since all third party ones had some severe trade-offs. Most non-casual users do in fact install a custom launcher, but that's about the only default you can be pretty sure has a better alternative out there.

Meanwhile, most people I've talked to only use side-loading apps to either install video game emulators, and install apps before they are officially released. There are emulators you can side-load onto iOS, but I do admit it is nice to be able to get those super sneaky SDKs for apps that shouldn't really run on your phone.

And all that system automation that apps like Tasker allow, well most of the useful actions people set up are things like triggering Wifi/Bluetooth on or off based on time or location, or a bunch of other menial tasks. Controlling the utilities and system settings of my phone are not what I would call real power user features, they're tweaks and minor conveniences. For some people, this sort of stuff may be one of the things they love about Android, but it does nothing for me. My iPhone tends to make it so I don't even worry about most of the things Tasker lets me automate.

Oh, and the fact that Android Nougat was released on August 22, 2016, and now 5 months later it's still not on 99.3% of phones is insane. I have a Moto G4 which is running almost stock Android, and even it is still unclear when Motorola is going to release Nougat. It was going to be before the holidays…then it was going to be before New Year's…then January…and now who knows when. Meanwhile the last 5 generations of iPhones all got iOS 10 the day it released in September.

And that's it, folks! I hope you found this extended look into Android helpful. It is far from comprehensive, as I didn't even have time to get into the digital assistant stuff, smart home capabilities, lock screens, system settings, and more, but I tried to cover the things that would be of most interest to iOS users.

I'm sticking with iOS for the foreseeable future, as Android did little to make me think it's nearly as good for me as iOS. As someone who cares about getting real work done on my mobile devices, Android falls far short of my needs. My needs aren't the same as everyone else's but if you're anything like me, you'll probably feel the same. Android is not the platform for me, not by a long shot.

Why I'm diversifying BirchTree in 2017

Just a quick programming note on the site today. I've gotten a…

Did you know IFTTT widgets are kind of awesome?

https://www.youtube.com/watch?v=nWNmoWcCtzU Widgets are an underused tool…