But here's the thing that's a little distressing: despite Google's efforts to get manufacturers to upgrade their phones to the latest versions of Android quickly, new versions of Android are actually getting adoption slower than they used to. "That's madness," you say, but oh you would be mistaken.

I looked at the last 8 major versions of Android (from Froyo up to Nougat) and collected data on each version's adoption rate from August 2010 to today. Using Google's official numbers from their developer portal, I was able to determine the following trends.

1. Less than 1/3 of Android users are ever on a software version released in the past year

Only 2 versions of Android in this time period have achieved 50% device share (Froyo and Gingerbread) in their first year, and incidentally those were the 2 oldest versions of Android on this list. Nothing from 2011's Honeycomb through today has achieved this market penetration.

2012's Android Jelly Bean is the only version of Android since then to crack the 50% mark at all, and it did that 13 months after its release. Jelly Bean was also an odd duck, in that it was actually 3 major releases with the same name. So while Jelly Bean achieved 62% Android share in March 2014, only 15% of Jelly Bean users were on the current Jelly Bean version. 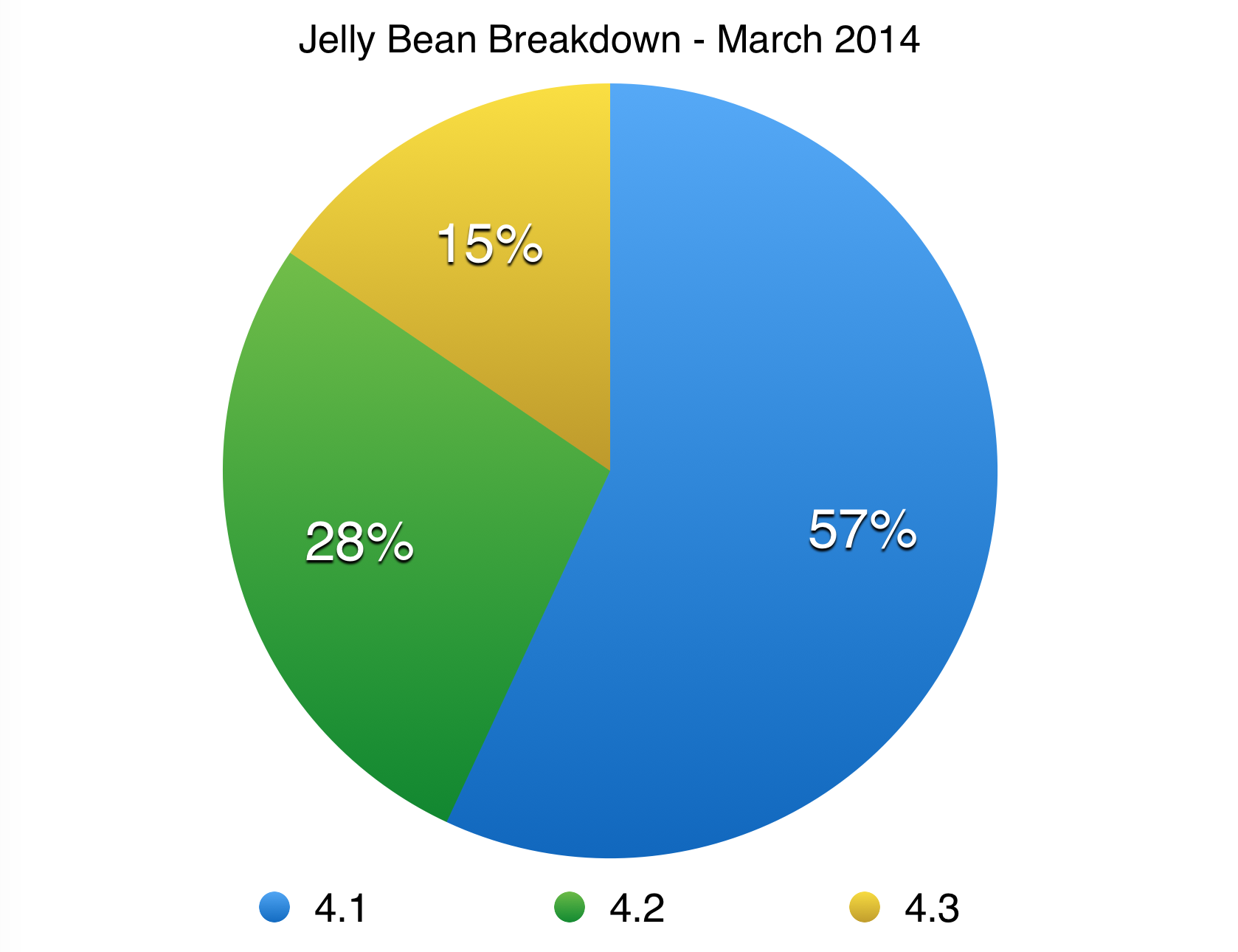 2. Google is getting worse at upgrading their users in recent years

In the Froyo (2010) through Jelly Bean (2012) generations, Google was actually better about having their devices out in the wild get upgraded to new Android versions than they have been since. Here's the first 12 months of adoption for those 4 versions of Android: 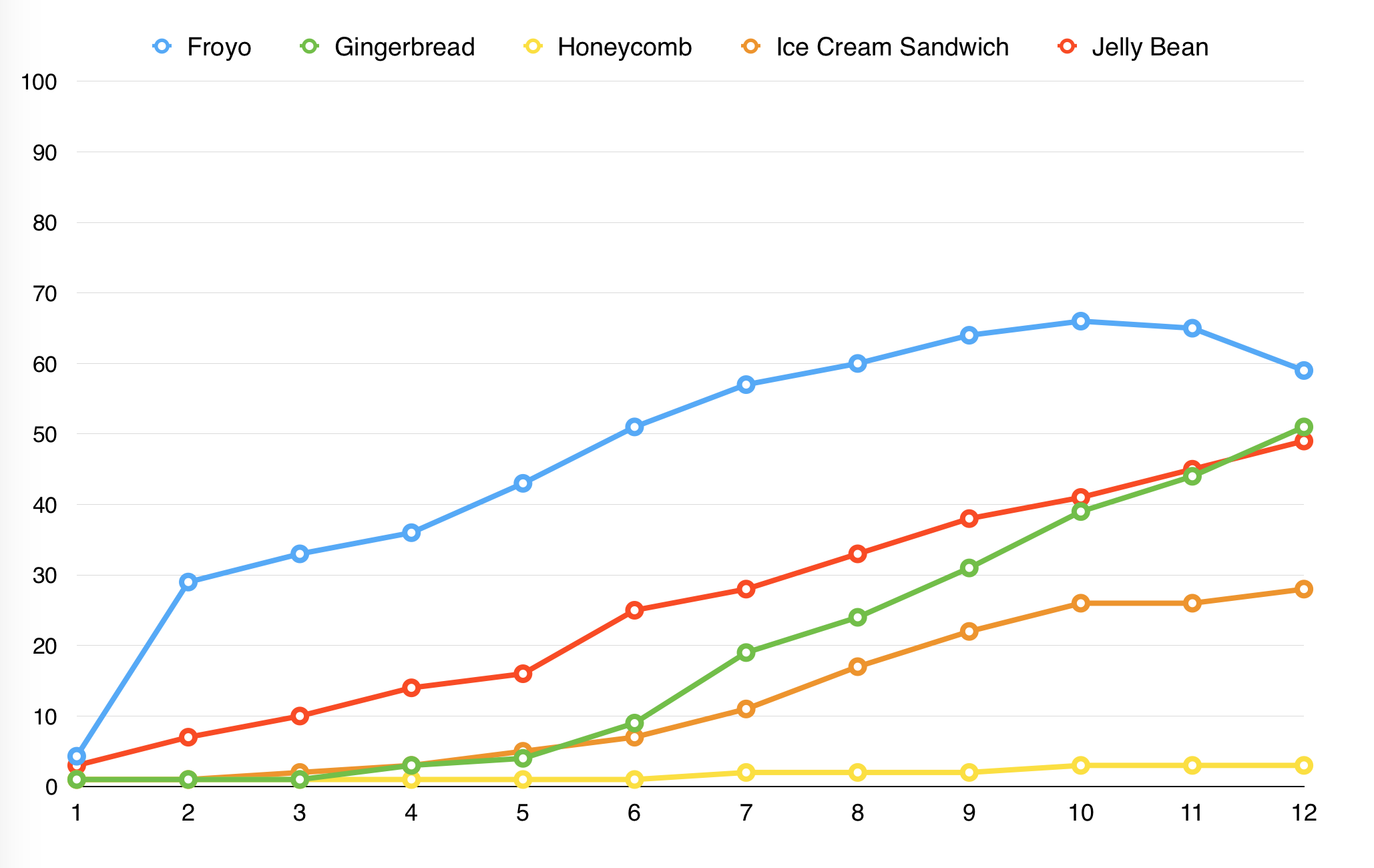 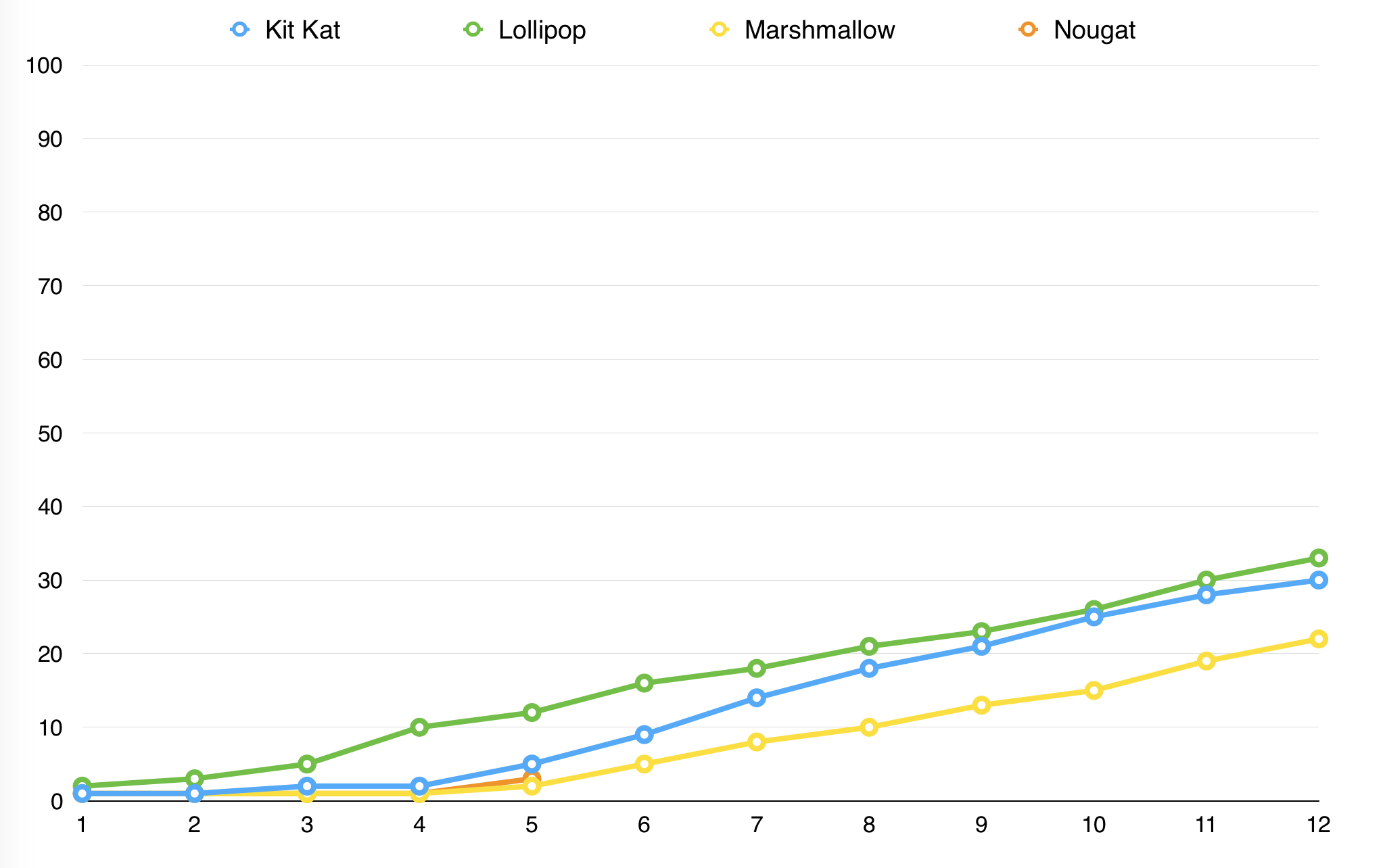 A couple things popped out to me when separating out these data points.

Updates have always been a problem for Android, but Marshmallow really set itself apart as being an update the industry seemed to give precisely zero shits about. It took 8 months to achieve 10% market share, and even 18 months after its release is still less popular than Lollipop which came out the year before (33% vs 31% device share).

And now that Nougat is available and Android O is even in beta, Marshmallow isn't something you even want on your phone these days. The question remains who will drop in market share faster, Lollipop or Marshmallow? Given some Marshmallow devices will eventually be upgraded to Nougat, and Lollipop devices are more or less done being updated, I think there's a chance Marshmallow will fall off faster.

Google has known upgrades have been a problem forever, and in 2011 Android lead Hugo Barra addressed it at the company's I/O conference:

That got this user on Droid Life very excited:

This is exactly what I was hoping for out of this io conference. What more could the community ask for other than timely sanctioned updates? I don't care all that much because of roms, but this is huge for android in general. Now I can safely recommend any new device and know that it will be supported and updated for at least 18 months. Thanks Google!

Google's promise of better updates did not occur, as every release since 2011 has been fraught with problems. Their next version of Android after that was Ice Cream Sandwich and it never eclipsed 30% device share, a first for Android versions that ran on phones.

Google and hardware manufacturers can talk all they want about being serious about software updates, but history shows that not only are they not improving, but they're actually getting worse. Even manufacturer promises aren't worth the digital pages they're printed on. HTC upset its users last year with their A9 phone got keeping up with their update promses. Motorola once had to give users $100 credits to buy a new phone when they broke their promise about upgrading a line of Moto phones in 2012.

Android is an absolute terrible platform for people who have any interest in staying up to date with software releases, but missing out on Android updates doesn't mean missing out on everything Android has to offer.

As an example, unlike Apple, Google has many of its apps updated through the Play Store and not through system updates. So while I need to update my phone to iOS 10 to have the latest version of Safari, the latest version of Chrome runs on the last few versions of Android. This makes sure that the majority of users who are on older software can still get some new features.

You also have Google Play Services, which lets Google add not a ton, but some system functionality to older OS versions. Security updates can be pushed through without an OS update as well, and was a very good move on Google's part when they enabled this a few years ago.

Ultimately, these updates are not enough, and Google must find a way to get Android updates to more phones than they do today. I recently wrote about the new features in Android O, got caught up in the ridiculousness of the whole update situation, and got a little snarky:

Although I guess when a grand total of 2.8% of Android users are even on the latest version of Android, what does this release even matter in 2017? The biggest set of Android users are currently running Lollipop which came out in 2014. By that math, this Android O beta is a preview of where the platform will be in 2020, so look forward to that.

I'd love to think Google is going to get it together and find a way to make device makers to get better at this, but if recent trends continue, it's only getting worse. New phones seem to be more consistently releasing with the latest version of Android, but getting existing devices up to date is more of a pain than ever.

Earlier this month I mocked up what a refined version [https://birchtree.…