Using the iPad for: Photo Editing

This is part 2 in an ongoing series on BirchTree. You can read part 1 here.

The iPad has a big, beautiful screen and it's my favorite screen to view my photos. Swiping, pinching, and dragging through my photos is a more pleasant experience than clicking though them on my Mac. It's a more intimate experience, and one of those things that I think is so natural on touch screens that it makes the same interactions on desktops look archaic.

Despite browsing photos has been better on the iPad, editing them has long been better on traditional desktops. Apps like Photoshop, Pixelmator, and Acorn have been head-and-scolders better than anything on iOS. But here at the end of 2015, I think the narrative is starting to shift. There are a couple things I still keep the Mac around for (reasons mentioned below), essentially my entire workflow as moved to the iPad.

While part 1 of this series1 was me explaining how the iPad can work if you are able to make a couple sacrifices, this time my position is much stronger. I think the iPad is a marvelous place to work on your photos and has some amazing tools that make the desktop world look a little archaic in comparison.

So can you edit and manage your photos on an iPad?

Okay then, so what are the tools that will get you there?

I won't spend much time here because this app is pre-installed on the iPad and you've certainly used it extensively. My favorite think is iCloud Photo Library which works great for me. Having all my photos synced across all my devices is wonderful, and the success rate I have with the sync in this app is excellent.

I don't do a ton of editing in photos, as I think the tools available leave a bit to be desired and tend to make my photos look worse than I intend (probably my own fault), but they are non-destructive edits that also sync across your devices, which is really cool.

So while I don't do much work in the Photos app, all my work flows through here across devices, so it's an essential part of my workflow.

This is my workhorse on my Mac and I'm amazed at how much functionality they have managed to carry over to the iPad. Your basic controls are here, but I'm impressed with how many edits are supported. Access to saturation, clarity, contrast, white balance, and more mean that I can get the look I want from just about any photo I take.

You can use Lightroom to work on photos you took with your iPad or iPhone, but it really shines when editing RAW images, which it handles better than I ever expected. Files load quickly and modifications load in real time, so you're not waiting for things to render. I have a Mac Mini, which is not the faster computer in the world, but working on my iPad feels faster in certain areas, which is a huge compliment.

In addition, you can enable Adobe's sync functionality which syncs up your photos, including all their non-destructive edits, back to your Mac or PC. This feature is a little confusing to set up at first, but once you have your albums synced, they work brilliantly.

There are some limitations of Lightroom though. First, there is no good way to get RAW photos from your camera to Lightroom without first importing them into a desktop computer. You can use the USB camera connector, but this imports photos into Photos.app, and it seems that these images are converted to JPEGs when importing from the Photo Library.

Sadly, while there are a lot of editing tools available, it is not as full featured as the desktop app. I specifically miss the luminance and individual color sliders that I use somewhat regularly. These tools are missed, but they're not deal breakers.

Lightroom is a brilliant app that makes me feel like not only am I able to do my work on my iPad, but that the work is easier, more fun, and faster using this interface. Give it a little more power and I'll be completely over the moon. 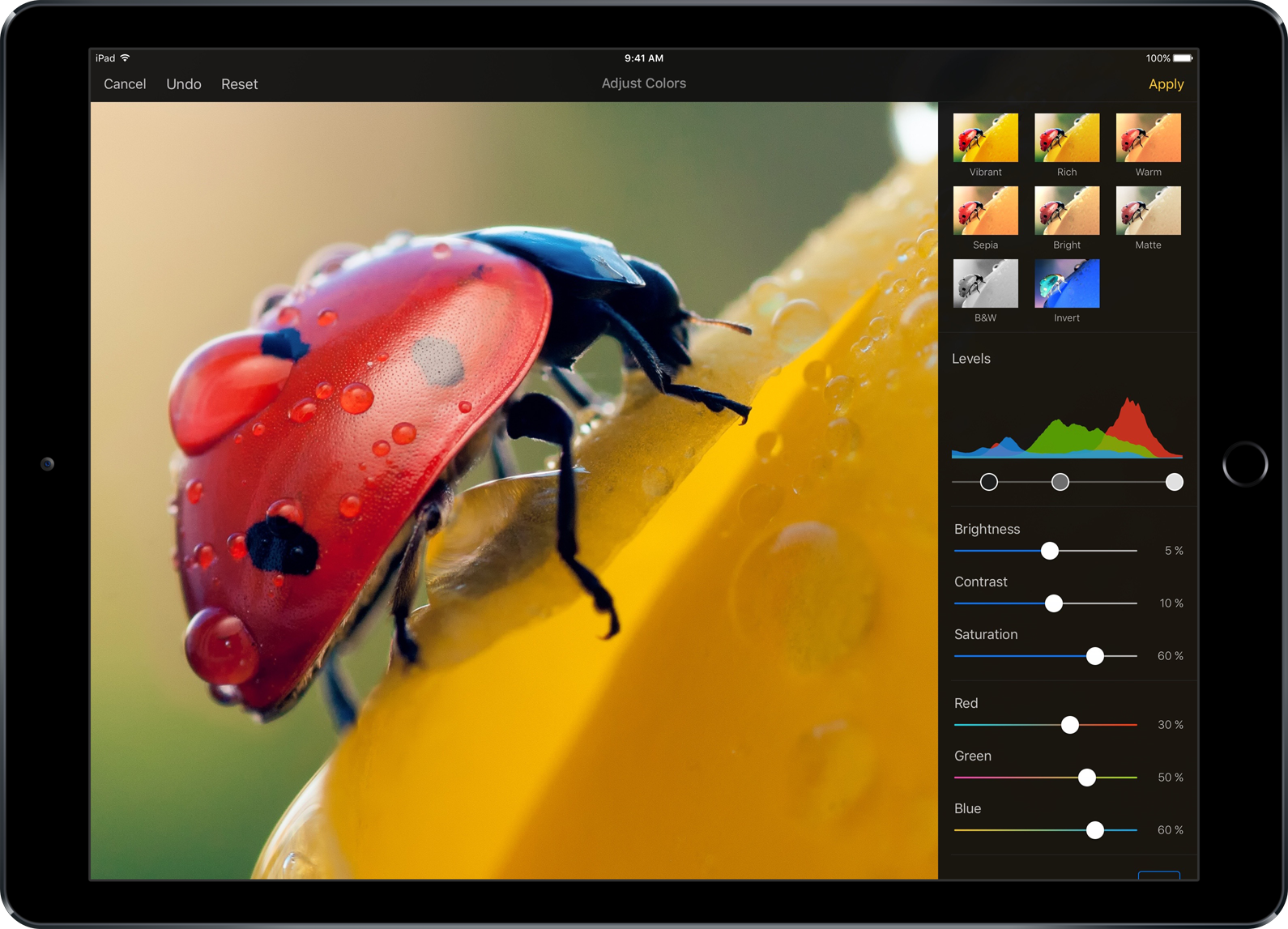 Pixelmator is the closest we have to desktop Photoshop on the iPad. While all other apps on this list are about taking one image and changing its appearance, Pixelmator gives you much more freedom to create brand new compositions in the app.

Pixelmator has a full layers-based editor that works quite well. Creating simple mosaics is easy, but the tools available enable you to get quite deep into your edits and produce some really elaborate creations.

The UI is beautiful, and quite efficient when you get used to where everything is. This is the sort of app that would really shine on the iPad Pro by revealing more elements of the UI at all times, but that hasn't been done yet.

One disappointment of Pixelmator is that it's iOS extension is a little underwhelming. Very few editing tools are made available from this interface, which means I almost never use this feature.

All in all, Pixelmator is a very powerful tool that you can almost certainly find a way to work into your workflow. It is the app that most makes me feel like tablets can indeed be the complete desktop replacements that we all dream they will be one day. $4.99 is a pretty amazing price for that.

There is no straight Photoshop for iOS, but Adobe has included many of their most commonly used "fix" features of the desktop app. You get minimal color options, a healing brush, smoothing, lighting, focus, and the "when is this ever useful?" liquify.

I don't use this a lot, but it's nice to have in a pinch. My use case tends to be doing all my regular edits in Lightroom and then using one or two tools in Fix at the end as needed.

I should note that Photoshop Express does much of what Fix does, but is more of a filters app. It's my hope that Adobe is working on a more robust Photoshop for iOS, but the apps they have now are good enough for some minor edits, but I'd highly suggest using Lightroom or Pixelmator for most of your work.

VSCO is not an app I use a lot, but it's one that always delights me when I do. There are some color, clarity, and morphing controls here, but they're implemented in a clever and unique UI. When you can basically do everything with your thumbs if you're holding the iPad in landscape. Your image sits in the center of the screen while you have editing options on the left and sliders on the right. It's a nice UI that was clearly made by a team who though about how people would be interacting with the app and designed the interface around that use.

There is also a social aspect of VSCO that I don't get involved in, but I know a lot of people do.

It's a clever little app that doesn't do as much as I need it to in my semi-professional requirements, but it is a lot of fun to mess around with.

There are tons and tons of photo editing apps out there for the iPad and this article only scratches the surface of what you can do.Let me know if there are any great apps I left off the list. I want to know about them and maybe even make my iPad-based photos workflow even better.

6 Republican Candidates Give a Big Thumbs Up to Bigory