There are many comparisons that can be made between the upcoming Apple TV and Nintendo’s Wii gaming console. They are each platforms that promise accessible, simple games with a focus on motion controls. The Wii is a great example of disruption in the tech industry, as it truly made everyone from the corporate executives to those who had never even played video games to think differently about gaming. Considering Nintendo’s unabashed success with the Wii, it makes you wonder if Apple can conjure up the same level of success with a product that has similar aims.

NOTE: For clarity, I’m only talking about Nintendo and Sony in the following data. Microsoft’s numbers are almost identical to the PS3s, and fall somewhere in-between the PS4 and Wii U sales numbers.

First, some quick context. Sony ruled the gaming world in the PS2/Gamecube/Xbox generation. To date, the Playstation 2 has sold 157 million units while the Xbox sold 24 million and Gamecube sold 21 million. That’s 202 million gaming consoles sold, most of which were sold from 2001-2006. Sony was primed to make the PS3 a huge follow up to their hugely successful PS2, but Nintendo beat them by playing a totally different game. Nintendo decided to break from the industry norms and focus on new ways to play, rather than the traditional focus on more horsepower. The Wii was massively underpowered compared to the “cell processor” powered PS3. New games looked dated right from the start, but Nintendo had an ace up their sleeves: the Wiimote.

The Wii’s unique controller grabbed everyone’s attention, and after some initial skepticism, became a phenomenon. Motion-based gaming was the hot new thing and Nintendo absolutely ushered it in with their awesome, disruptive console and controller. Before you knew it, Sony and Microsoft were also bringing out their own motion control solutions, but they were too late to jump on the bandwagon. 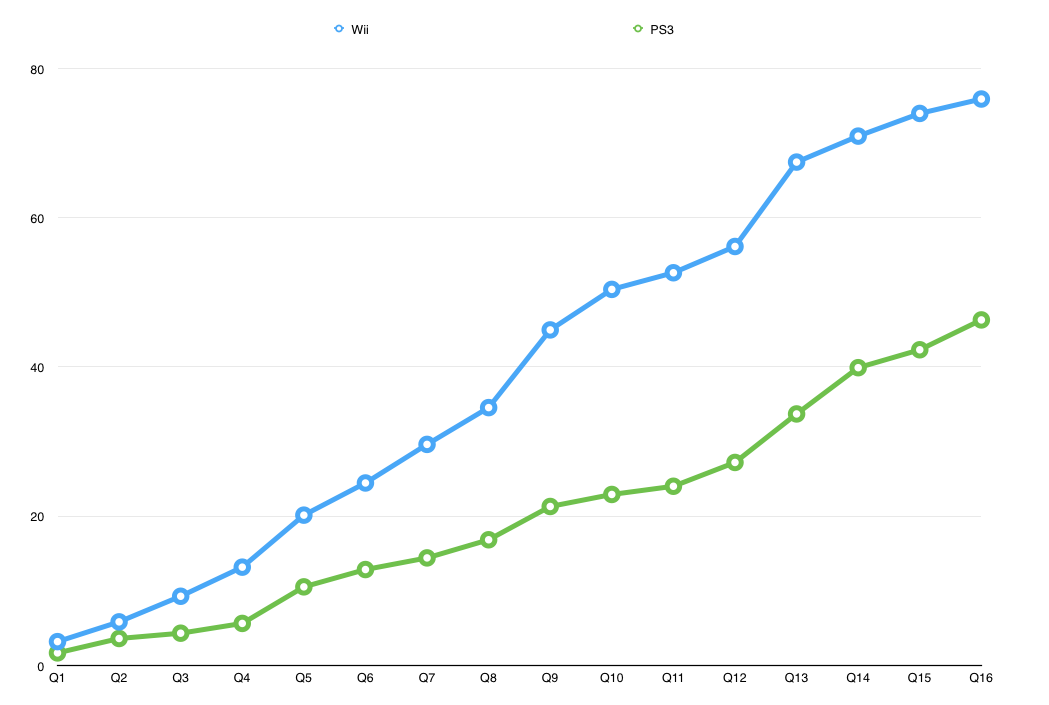 Nintendo was again the king of video games consoles, and much like Sony before it, was primed for another hit when they announced the Wii’s successor, the Wii U. However, although the Wii sold incredibly well, it had also developed a reputation as something you bought and played for a while before throwing it in a closet and never touching again. Much like Rock Band, it was something that you would pull out during the holidays so you could bowl with your relatives, but that’s about it.

The novelty of the Wii had worn off and while the sales numbers looked good in aggregate, the public perception of the Wii was struggling.

So when Nintendo announced the Wii U with a very similar pitch (play together, anyone can play, new way to interact), you would think that it would have a great chance of being another hit. The Wii U is also a very good console, just ask anyone who owns one. But after a big launch, the Wii U has failed to grab any meaningful marketshare or mindshare. Here’s how the Wii U and PS4 have performed since their launches (Wii U Nov. 2012, PS4 Nov. 2013): 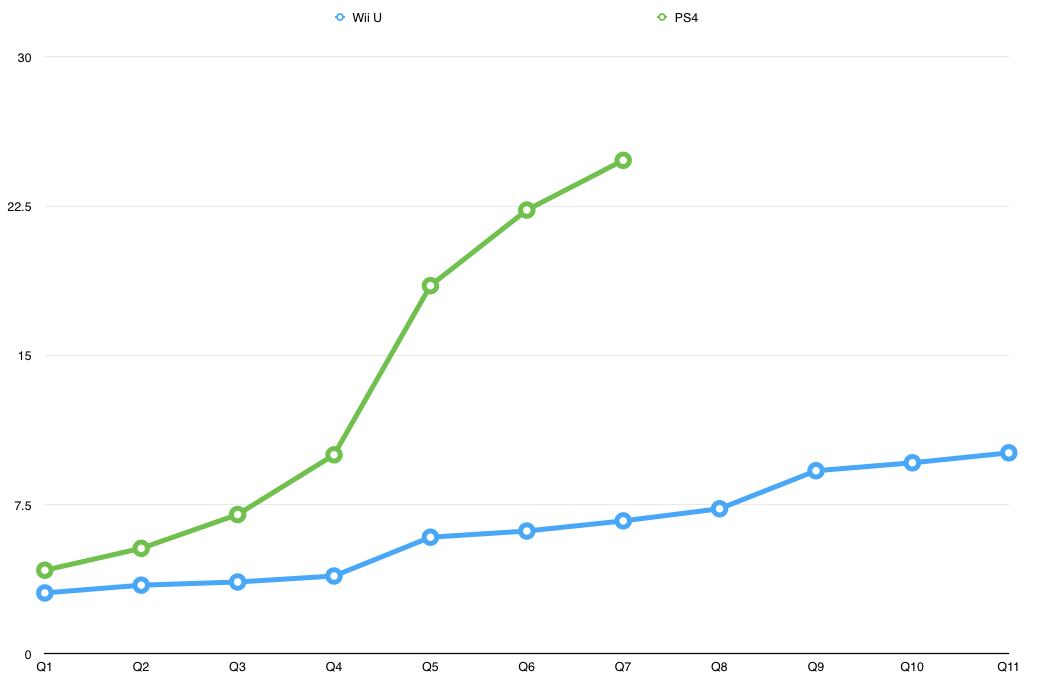 The PS4 is skyrocketing, selling at over 3x the rate of the Wii U. Check out the graph at the bottom of this article and you’ll see the PS4 is selling at almost the same pace as the Wii did in it’s prime. You don’t sell this many consoles to just the “hardcore gamer” crowd though, you have to be reaching more casual gamers as well. It’s impossible to know for sure, but my hypothesis is that the Wii brought more people into the gaming audience, but once people arrived, they found richer, more exciting games were available for the more traditional consoles like the PS4. Similar to how a kid may see the Minions movie and find out that movies can be a lot of fun, they’ll quickly want to expand their horizons and find there is a world of more interesting and satisfying movies out there.

There are a great many reasons why Nintendo has failed to keep up the momentum they had 5 years ago, but I think a big reason is that they created gaming consoles without the ability to keep up with the experiences you were able to get elsewhere. Motion controls are all but dead in the gaming world, and Nintendo is being pressured to just give up on hardware entirely.

The Wii and the Wii U are great in many ways, but they generated excitement around games that were novel, and exciting, but ultimately not better. This is why I am bearish in the potential of the Apple TV to make a big splash in the gaming world. While digital distribution and easier development are benefits the Wii did not have, this all feels like deja vu to me.

One final note, at the first Wii showing at E3 2006, the press line was over 3 hours to get a chance to play the new console. Were the things shown off at for the Apple TV games exciting enough to have press waiting that long to play? 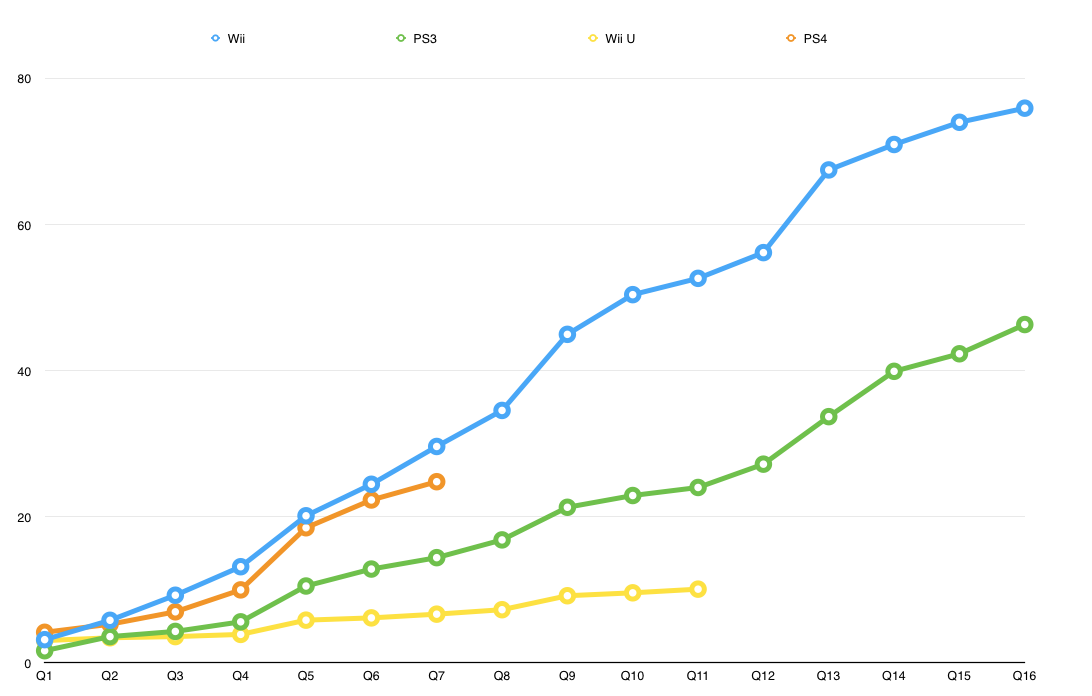 Nilay Patel writing for The Verge: You might think the conversation about…