Get in Touch
September 06, 2018
microsoft  surface

I spent a month with a Surface Go and I really didn't love it. I know it has its fans and for some people it's exactly the machine they wanted, but frankly I found it to be quite rubbish at doing just about everything. I felt it was excellent hardware betrayed by abysmal processing power.

But I loved enough elements of the Surface Go that I wanted to keep all that while having a computer that can actually perform tasks like, I don't know, typing things out without the letters taking a full second to appear on screen. The Surface Pro is the next step up, and thanks to a good bundle deal that made the cost difference justifiable, I jumped up.

Below is my review of the Microsoft Surface Pro, specifically from the perspective of how it compares to the lower end Go, as well as some obvious comparisons to the iPad Pro. This is a far more brief review, as many things are the same as the Surface Go, so I highly recommend you check that out too.

There isn't just one Surface Pro, so here are the specs for the model I got:

This is the baseline i5 model, which just means it has 128GB of storage (not 256GB) and is Wifi only.

Performance is the biggest difference between the Surface Pro and the Go, so let’s start there.

While the Go was cripplingly slow at just about everything, the Pro model is much, much better. Like I said in my previous review, I understand that less expensive computers are going to have compromises in performance, but I found the Surface Go to be punishingly slow and made even the slightest task a pain. I’m happy to say that the i5 Surface Pro does not suffer from this pain.

While $800 can buy a pretty sweet desktop PC or even a higher specced laptop, the Surface experience is quite good and the performance is nothing to shake a stick at. It’s not cutting edge, and I definitely experienced slow downs in my use, but I felt like I was getting enough speed for the money I paid for this thing.

In terms of benchmarks, the Surface Pro returns results about 5% faster than my 2015 baseline MacBook Pro, and is about 20% behind my iPad Pro in all web benchmarks I threw at it. That said, it was at least 2x the speed of the Surface Go in basically every synthetic test.

But it’s in regular use that things are noticeably better. Apps simply launch quicker (partly due to the faster SSD), I can run more than one app at a time without everything grinding to a halt, and I could use apps like Chrome without wanting to pull my hair out. It’s kind of boring, but I don’t have much more to say about it. Performance is perfectly acceptable for most day-to-day tasks. You can edit video on this thing if you want, and while it will be slower than many pros want, it can at least get the job done.

In my Surface Go review I tested some games, and thought it was only fair to test them here as well. Without getting into too many details, I was quite shocked to see that most games ran basically the same. Old games still ran well and newer games ran like rubbish. Even Fortnite ran at about 10-15 frames per second, which I find rather shocking. Even when I reduced the game to lowest settings and dropped the resolution to a horrifying 360p. 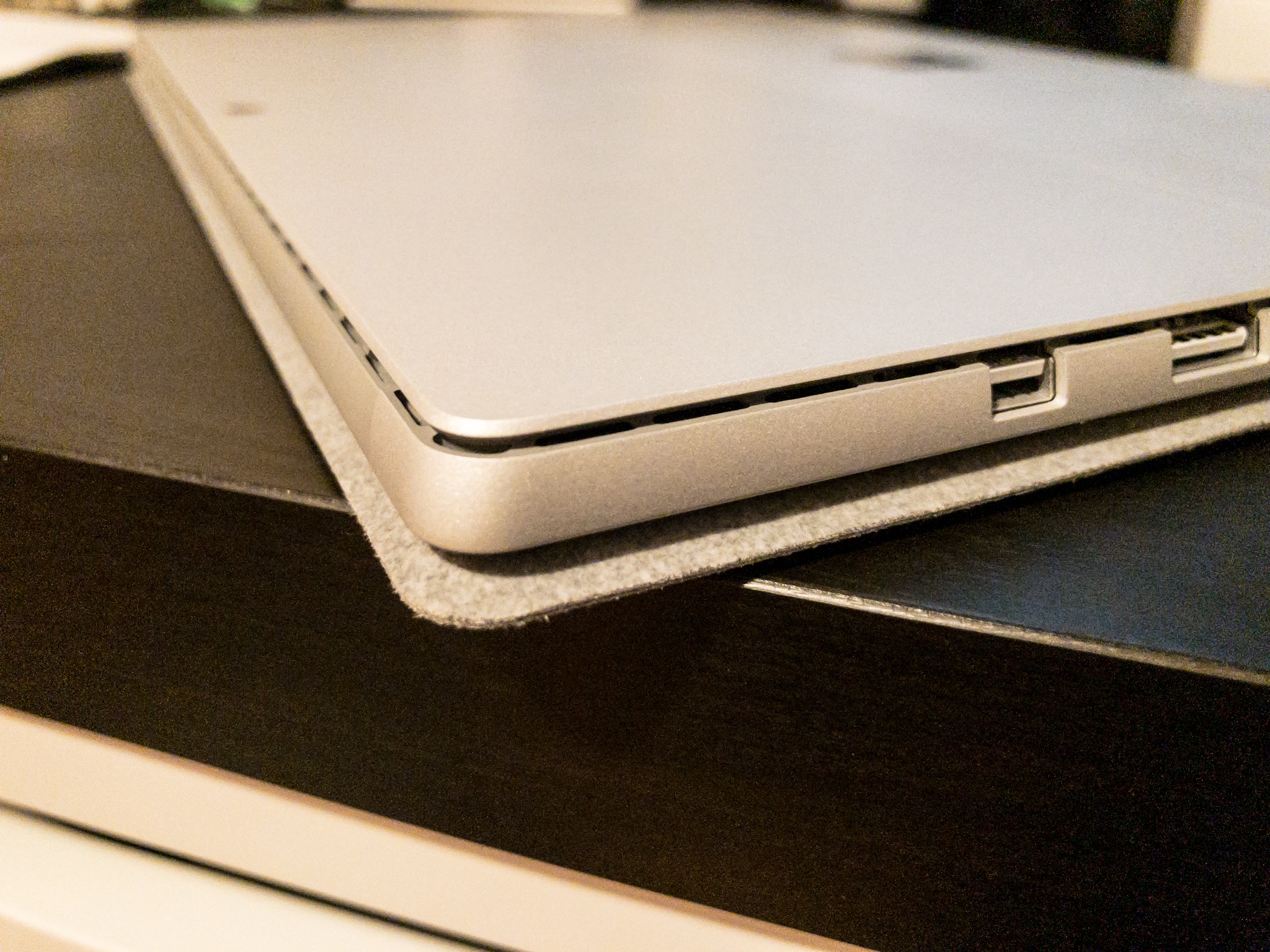 If you read my Surface Go review, then you already know most of the story. This is very premium hardware and even if you don't get the bundle deal, you'll be hard pressed to find much to complain about with the build quality.

The magnesium frame feels great to the touch and just plain looks expensive. I love how this feels in the hand. The edges and corners are a little sharp for my taste, but they're fine. The Surface Go was more rounded and I found it to be more pleasant to hold in the hand.

The Surface Pro is not a thick device by any means, but it was noticeably thicker in the hand than my iPad Pro. It’s 8.5mm thick, which is 40% thicker than the 10.5” iPad Pro and 23% thicker than the bigger 12.9” iPad Pro. It’s only going to be a problem for people who also use an iPad Pro, but if you’re used to Apple’s paper-thin devices, you’re going to have to get used to a little more heft.

More troubling from my perspective is that the weight of the device does not pair well with the kickstand for lap use. In my Surface Go review I posted an image of my legs after using that device for a few minutes. The Pro is much bigger and much heavier, and the kickstand is absolutely killer on the lap. I can't use it for more than a few minutes before it gets uncomfortable.

Also on the comfort front, the model I got gets very hot at times. The fan-less design means this thing never makes a peep, but it also means that as soon as you start to use the CPU, it gets quite warm. It gets slightly warm when using Chrome or watching videos, but it gets very, very hot when using Photoshop, Lightroom, and literally any game, the body gets wildly hot. Not hot enough to do any permanent damage, mind you, but too hot to hold comfortably.

The display does redeem some of this though, it's a gorgeous screen! It has a 1% higher pixel density than the 10" iPad Pro I use everyday, and it looks very, very good to my eyes. I do find the iPad's 120Hz refresh rate even more impressive, but compared to any other screen on a mobile device, this holds up very well. 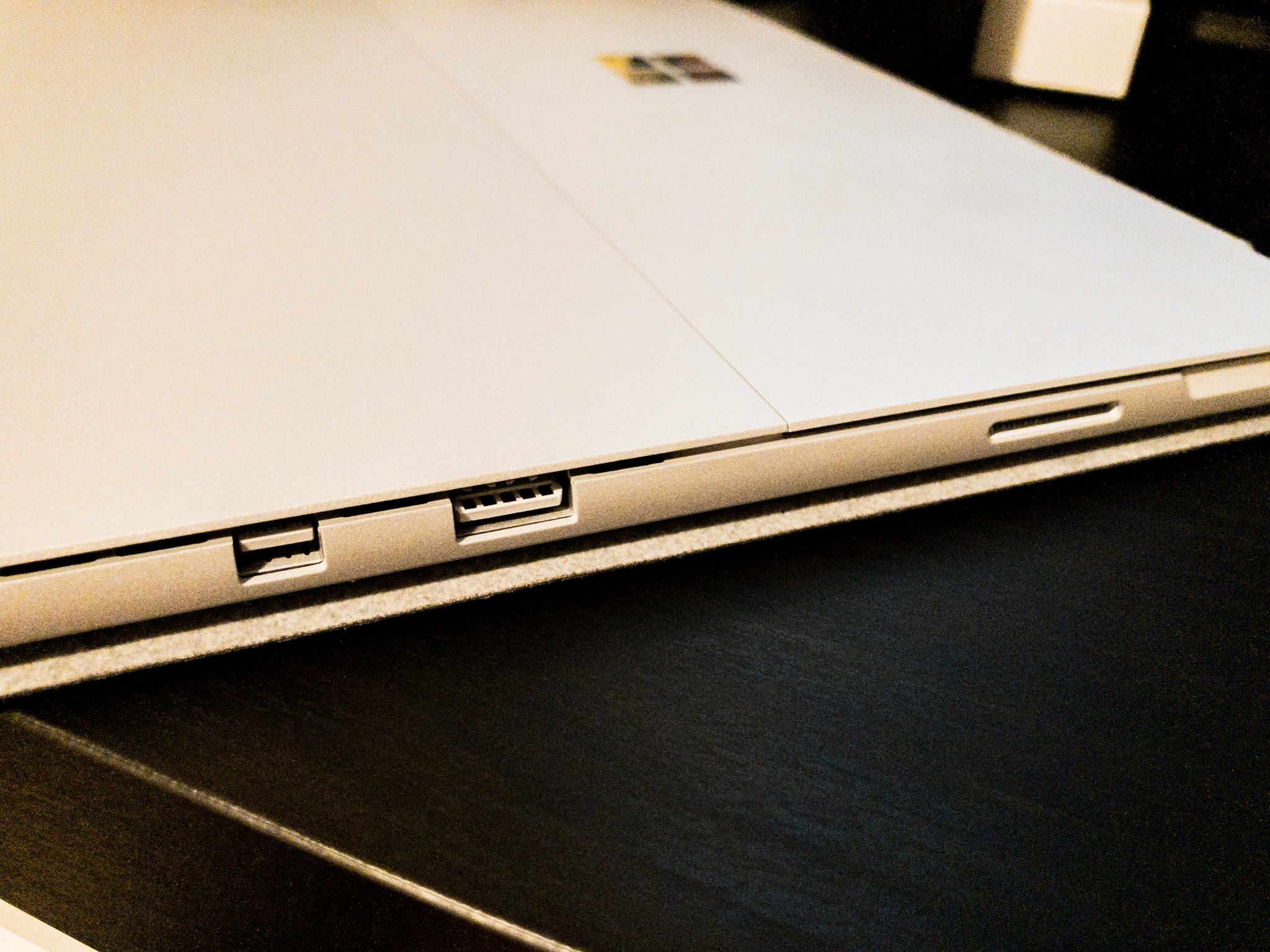 The ports on this thing are very 2015, which is a shame because it's 2018 and this came out in 2017. The only 2 standard ports are a USB-A and Mini DisplayPort. I have not had a reason to use the USB port, an I can't think of a reason I really would. The DisplayPort works well, and is what I use on my 2015 MacBook Pro, so it's fine for me, but I really enjoyed used the USB-C plug on the Surface Go to do this instead. Here's hoping the next Pro has at least one USB-C port.

Microsoft's Surface Connector is only good for charging or using with Microsoft's $200 dongle. It does a lot, but in a world of dongles the $200 dongle is king. Sadly, my insane adventure into Windows didn't convince me to get one of these bad boys.

On the plus side, the micro-SD slot on the back (under the kickstand) is nice to have and I put a 128GB card in there to give me a bit more space to work with. It’s far slower than an SSD, so try to only put big files you don’t need to access super quickly.

The battery life on the Pro is so much better than it was on the Go. While the Go struggled to get more than 3-4 hours for me, the Pro is getting more like 7-8 hours (all of this was unscientific, I just used the devices like normal). That’s a far cry from the 13.5 hours Microsoft advertises, but it’s been enough for me.

Just like the Surface Go, the Surface Pro’s ability to be a tablet, laptop, and desktop is a killer combination. Despite my qualms with Windows itself, there’s something really liberating about being able to use the same device to use to watch YouTube videos while I make breakfast and then plug it into a monitor to get a full desktop style experience.

Read the Surface Go piece for more details, but this is something that Apple does not have in their lineup right now and I deeply wish that they did.

The Type Cover is something I enjoyed with the Go and I enjoy it equally on the Pro. It’s basically the exact same thing, but bigger. I don’t have problems on the 80% sized keyboards like you have on the Go and 10.5” iPad Smart Keyboard, but I know some people do, and they will certainly appreciate the additional space. Here are the (top to bottom) Surface Go Type Cover, 10.5” iPad Smart Keyboard, Surface Pro Type Cover, and Apple Magic Keyboard. 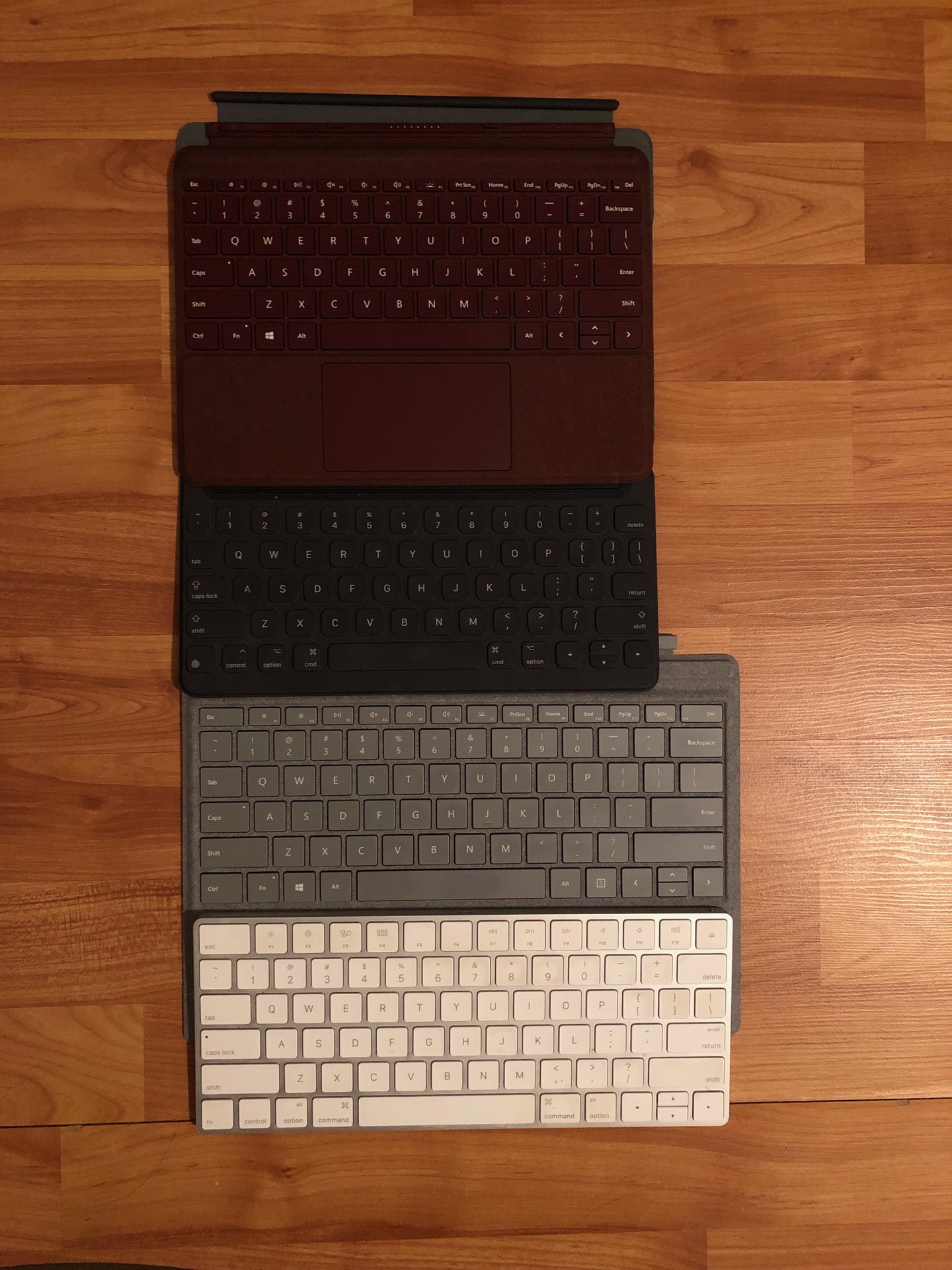 Regardless of using the Go or Pro model, the Type Cover has satisfying keys, a smooth trackpad that works quite well, and a nice fabric cover. The backlit keys are also very welcome, and something I’d kill for on the iPad’s keyboard.

Amazingly, many of my problems with the Surface Pen on the Go are fixed by the better performing Pro. Taps work much better, no longer requiring me to press and hold on the screen for a full second to get it to register a tap. Navigation is still more awkward and less natural than using the Apple Pencil on the iPad, but I at least found it to be an option this time.

Otherwise, the Pen is quite good at drawing, with excellent latency and best-in-class pressure sensitivity. Although if I’m honest, the difference between 2,000 and 4,000 detectable pressure levels is a total wash to me; it all feels the same. Not to say more serious artists won’t notice the difference, but try as I might, I couldn’t tell a difference between the Pen and Pencil.

The Surface Pro is a good Windows tablet with excellent build quality, good first party accessories, and perfectly mid-range performance. And as with any good portable computer, it has a fantastic screen.

It struggles when it comes to comfort, with both heat and general handling being small issues. It’s port selection also makes it feel a bit dated.

If I loved Windows then I’d likely have a better personal opinion of this device than I do today. No matter how good the hardware is, I’m just not a Windows fan, but if I was forced to go all in on Windows platforms, I think a Surface Pro would be the perfect machine for me. The combination of being a tablet/laptop/desktop all in one is fantastic, the build quality of it and its accessories is second only to Apple.

But since I am not a Windows fan, I think this one is getting packed up and sent back to Microsoft as well. It’s just not the platform for me, and this hardware, which good, is not enough to make me overlook those deficiencies.