The first few sections of this review have been all about the Surface Go's best aspects, but this section sadly takes us into what I see as the biggest challenge for the device: performance. Look, I get that this is a $399 device and it's not going to be the fastest machine in the world, but I personally found the performance issues to be relatively shocking for a device sold straight from Microsoft.

The Surface Go is sporting an Intel Pentium Gold 4415Y processor, which is a dual core processor from the Kaby Lake family of processors. It's a year old processor at this point and it was already a super low end processor when it came out, but let's see how it fares in late 2018.

The Intended Use Case

The Surface Go is not meant to be a high end computer that multitasks with hundreds to Chrome tabs and another 10 apps all running at the same time. Instead, the proposed use case is for a user to do one or two light tasks at a time. So maybe have Twitter and a browser open, but maybe don't try to also run Word at the same time.

As an iPad user, I figured this would be a simple transition. I use an iPad Pro with no more than 2 apps at a time, and things a great, it's my favorite computer ever. Sadly, this 1-2 apps at a time lifestyle is harder to implement on Windows than you'd expect, and even when I used one app at a time, I still experienced performance issues that made the device borderline unusable.

The first problem I had was that even if I was able to get great performance from a single app at a time, I had to use my computer in a very unnatural way to achieve this. Many app like to run minimized or lose all your current data when they're closed, which means the process for switching away from one app was typically to save my work to a file (old school, and only if the app supported it) or finish what I was doing because my status would be lost if I closed the app entirely (Edge tabs, for example). Then I could manually close the app with the window close button and launch the next app.

That process feels annoying to me, and negates much of the benefit of having a traditional PC operating system. One of the big draws of Windows and macOS is the ability to run multiple apps at the same time and have full control over what is running. With the Surface Go, I felt like I had all of the overhead of a traditional operating system (file management, app management, slowdowns, etc.) with all the limitations of something like iOS or Android. It felt like the worst of both worlds and not the "no compromises" experience one is supposed to have with Surface devices.

Even with One App at a Time, Things Are Slow

I posted that video to Twitter after going into a slight rage about single app performance on the Go. The cardinal sin for computers, in my opinion, is to have the text on screen lag behind your keypresses. This happens in Twitter, Word, and numerous other apps at times, and I can't explain why it's happening, but I can say it's super annoying.

The problems continue with Chrome, which is basically unusable on the device, even with a single tab open. The app locks up constantly and scrolling is a hellscape of sadness. I had tons of issues with YouTube videos stuttering in Edge, so I bought the much-loved MyTube app and gave it a shot. It is definitely better in terms of performance, but it too sometimes has issues displaying smooth video after 10-15 minutes. It's not a problem 100% of the time, but it's enough that I don't trust the device to even play videos every time.

For a real shocker, here's what the CPU usage looks like as I edit a single text file (this article, actually) in Caret, a plain text editor: 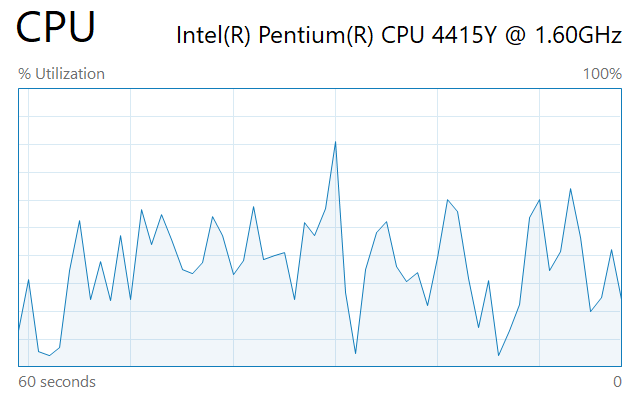 Even if we move out of apps themselves, the operating system itself just feels like it's struggling to keep up. Every action has a delay from opening the Start menu to launching apps. Part of this is likely due to the eMMC storage in my baseline model, but considering the CPU shows 100% usage whenever I so much as move the mouse, this computer feels like it's always working as hard as it possibly can.

I made the above video to show the differences between the performance of the Surface Go and an 18 month old iPad. The iPad costs over $100 less than the Surface Go, so the fact that it beat out the Surface at every test was disheartening. And for what it's worth, the Surface Go was as fast as I've ever seen it when I recorded that video. That's the best case scenario for it, while it's often less impressive than that. Meanwhile, the iPad is consistently about the same.

The problem here is pretty clear, Windows 10 is simply too heavy to run on lower end hardware like this. There is too much going on at a core level, and the low power, fan-less hardware to handle well.

The Surface Go has a USB-C port which can output video, and I have it hooked up to a 27" 1440p 60hz monitor. I was a little worried about abysmal performance when pushing more pixels over a wire, but it holds up perfectly well here here. That's not to say it's amazing or anything, but I didn't notice any degradation in performance between things on the tablet vs the external display. Games, of course run miserably at the full resolution, but that's to be expected.

The bottom line is that if you are okay with the performance on the tablet, you can plug it into a display and it'll be alrioght there too.

Now I know the Surface Go is very much not a machine you should buy to play games, but games are a common task for tablets, so I had to test out a few games to see how they did. This isn't a "gotcha" section where I run Far Cry 5 and complain about bad frame rates, I'm looking at some lower end games that might work okay.

This is a super random assortment of games, but they're what I was able to run and mostly that I already owned in Steam and GOG.

No gaming test in 2018 would be complete without Fortnite, and I'm sad to say that the Surface Go simply can not play this game at all. Here's a quick demo of the performance:

It's really not good, and this is on the absolute lowest settings the game has.

The game is locked at 30fps and it ran that way much of the time. The game defaulted itself to medium settings, and maxed out at a lower resolution than the Go's native 1800x1200 resolution. I did notice that after about 10 minutes of playing, the back of the device heated up to uncomfortable levels and the frame rate dropped to 15-20fps.

Also worth noting that the touch controls for this game are excellent. Whether you use a mouse and keyboard or your fingers to play, it's a good experience. Just know it's going to lag a bit if you play more than a couple rounds.

This is a 13 year old game, but it's one that I really enjoyed as a teenager. thankfully, this runs at over 60fps on the default settings, which are basically 720p and medium settings. If you want to play on high, it's going to run about 10-15fps, which is a little bit of a bummer.

This is a mobile game brought to the PC, and it expectedly runs perfectly well on the the Go. It typically runs at 30fps, but when crashes happen and a decent number of particles are on screen, it drops for a fe seconds. Another game totally playable with touch controls.

This 6 year old game runs like a dog on the Surface Go. Even on the lowest settings and a miserable 480p resolution, I still didn't even get 30fps. Using anything higher resulted in a completely unplayable experience.

Similarly to Blizzard's Diablo 3, this game runs terribly, even at lower resolutions.

This is a really cool indie game that came out in 2013 that runs perfectly well on the Go. 60fps locked.

Valve's old, but still fun zombie shooter runs well if you turn down the graphics and resolution. If you're willing to do that, the game is a pleasure to play, ranging from 330-60fps most of the time, although I experienced the same overheating issues which made the frame rate tank after about 20 minutes of gaming.

This game is a champ on the Go! I got a full 60fps at 1800x1200 resolution and it never dropped. I only played like 20 minutes, but it was damn impressive.

We're getting into super old games here, but this relic from 1999 plays expectedly great, never dropping from 60fps. It looks absolutely terrible by modern standards though.

I have complicated feelings about the performance on the Surface Go. On the one hand, if you baby it aggressively and truly only do super low intensity stuff, it can be okay. I'd like more in a $400 computer, but the benefits of the tablet form factor and premium build quality meant they had to make some trade offs. As for gaming, it runs old games mostly fine, and you just have to know that almost no new games aren't going to happen.

But at the same time, the $329 iPad shows that you can ask more from your sub $400 computers than you get from the Surface Go. I think that asking someone to use Windows and only use one app at a time is a pretty major annoyance and negates many of the benefits of having Windows in the first place. Even if you stick to that one app lifestyle, the fact that you still routinely have major performance drops and significant lag on a regular basis is hard for me to swallow.

The Surface line is supposed to be Microsoft's vision for computers, and while the higher end Surface line might do well, but if this is what Microsoft deems acceptable performance for a Windows experience, I'm truly surprised. As I mentioned earlier, the culprit here is partially the processor, but it's also a fundamental issue with Windows itself: it's just too much, and requires too high a baseline processor to run at a good clip.

If you are getting this as a device you'll be using for small tasks here and there, it might work for you, but I really worry about people who buy this expecting it to work for many years. People buy iPads every 5 years or so. This thing is barely hanging on right now. I can't imagine what it'll be like 5 years down the line.

Apple invited press to their September event today, and as is tradition…