Speculation on why Target is Still Not Taking Apple Pay

Apple has said that by the end of 2018, 60% of US retail locations will take Apple Pay. That’s a substantial number of business locations, and it’s a number that’s only going up. But there are still some hold outs. On the one hand, there are merchants who process through providers that either don’t support Apple Pay or make it a pain to use. That group isn’t who I’ll be looking at today. Instead, I want to look at Target to try and understand why they don’t take Apple Pay, and what they’re doing instead.

Full disclosure, I worked as a store manager at Target from 2010-2015. I have some knowledge of how the company worked that might be informative, and at this point I don’t think I have any “inside info” that isn’t okay to share publicly. If this post gets deleted though, then I guessed wrong. FWIW I did not work at corporate where these decisions were made, so much of these are educated guesses.

Why Take Apple Pay in the First Place?

First and foremost, it’s good to give your customers as many payment options as possible when they’re checking out. You don’t want to have someone ready to buy and then abandon their cart (literally of figuratively in this case) because you don’t let them pay how they expected. So it stands to reason that if people want to use Apple Pay, you should allow it if at all possible.

Second, people enjoy using Apple Pay, and your checkout experience should be as pleasurable as possible. Parting with money isn’t particularly fun, so anything you can do to make it a bit more enjoyable is a win.

Third, integration is usually very simple. Apple is using EMV over NFC for it’s communication protocol, so many payment platforms that support NFC for EMV also support Apple Pay with little effort. As the merchant, all you should have to do is buy a reader that takes wireless payments and you’re off to the races.

And fourth, as Apple Pay and other mobile wallets get more popular, they’re going to be more “expected functionality” of any checkout experience and customers are going to be surprised if you don’t have it soon.

What Target Is Doing with Mobile Payments 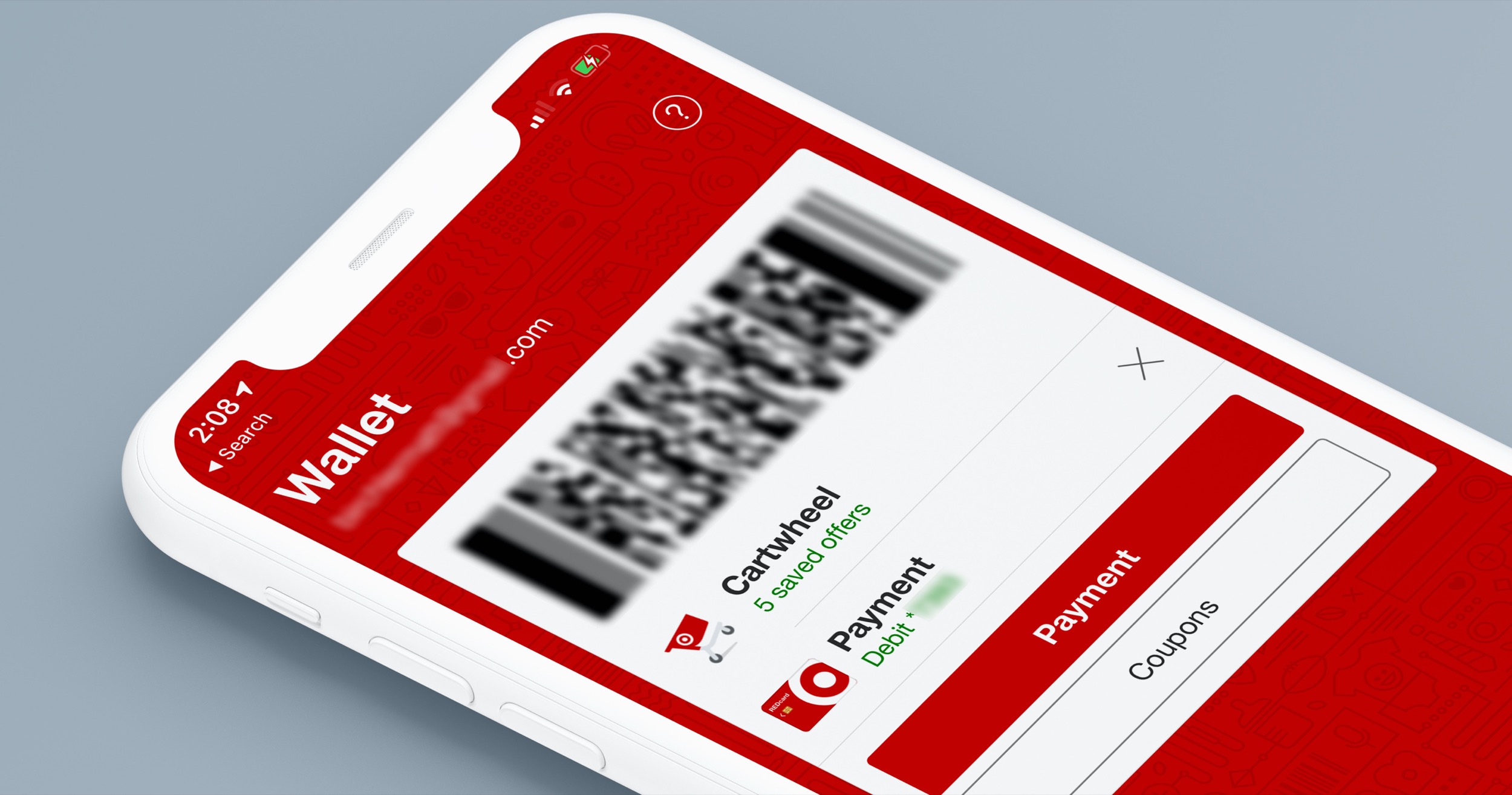 This story starts back in 2013 when Target unveiled Cartwheel, a couponing app that had exclusive deals that cycled in and out on a regular basis. After a string of misses in the ecommerce space, Cartwheel was finally something that clicked with customers. At the time I remember seeing tons of people in checkout lines scanning things in their carts for more deals and employees chatting about cool deals they were seeing. A year after launch, Cartwheel made up 76% of all time mobile users spent on Target properties. Put another way, people spent 3x as much time finding deals and sorta-shopping in Cartwheel as they did in the actual Target app and website.

Cartwheel got customers used to using the app to find deals. In theory, people would find their deals at home before they went shopping, but they were just as likely to do this in store as they shopped. A very common scene was someone putting things in their cart as their spouse scanned them to see if they were on Cartwheel. Cleverly, if the item wasn’t on Cartwheel, the app would suggest similar items that were on sale in the app.

Target was not only getting people to use their devices in store, they were nudging them towards buying the items the company was pushing. Not bad.

Oh, and at checkout, customers had to show the cashier their Cartwheel barcode in the app to actually get the deals they’d spent time scanning in.

Then in the summer of 2017 Target sunset the Cartwheel app and merged it into the main Target app. There was a little bit of grumpiness around this at the time, but people were ultimately fine with it, and Target got their 10+ million Cartwheel users into their main app.

Now that people were using the Target app to shop and find deals before going to the store, they used the app while they were in the store, and they were getting their phones scanned at checkout, we come to December 2017 when Target introduced Wallet.

Wallet is just Cartwheel for everyone who was already using that service, but they also made it so you could link your Red Card to the bar code as well and process your payment without involving your card at all. So now at checkout, I hold my phone up like I did before, but now my payment is processed immediately after the Cartwheel discounts are applied.

All in all, this gets Target everything they want. Customers are engaged with their “braaaaaand” and are actively using their app in store to get more deals, subsequently buy more, and pay easily at checkout with their phone.

Besides that, why Aren’t They Supporting Apple Pay?

This goes back a few years, but let’s go back to the much-publicized 2013 Target data breach. I worked there at the time and there was a lot of pressure to show that the company was extra serious about securing their payment systems. Among other actions, one big change was that they were pushed to install EMV-capable payment terminals to all of their locations very quickly. And the company, as they really had to do, fast tracked this.

When you consider there are about 1,700 Targets in the US and each one of those has 20-40 registers, that equates to something in the range of 50-60k terminals. That’s a lot of terminals, and at $500+ a pop1 for the multi-lane devices a company like Target needs, that works out to $25-30 million, plus the cost to update their software to use them, have their team install them, and train all employees on them. None of this is free, and it’s a serious investment for the business. That makes the settlement Target paid for the breach of $18 million, seem pretty quaint in comparison.

I’m not positive what readers Target is using (this is surprisingly had to Google), but if those readers don’t support NFC (possible) or Target didn’t certify for contactless EMV (more possible) then it’s not simply a matter of “flipping a switch” to turn Apple Pay, they’d have to do a certification with their payment processor to roll this out. It’s not a horrible pain in the ass to do so, but would require a little investment and need to be prioritized.

And maybe it is indeed just a matter of turning on NFC for their readers because they’ve done the certification work needed and are just willingly not using it. If that’s the case then the fix issuper simple and there’s really no cost excuse.

On top of potential cost/effort, Apple Pay hurts their ability to get as much customer data as they could with their own card and payment system. Like it or not, Target knows a lot about each individual shopper. They use this data to direct advertising that they think will connect with you and generally learn about their customer’s buying habits. Apple Pay doesn’t make this impossible, but it makes it harder2.

But Apple Pay supports store cards and rewards systems, so why not integrate the Red Card and Cartwheel into Apple Pay? Well, Apple Pay support rewards systems, but not coupons and “immediate discounts” like Cartwheel. They could integrate the Red Card to Apple Pay so you can tap your phone to pay, but Cartwheel would still require a cashier to scan your phone’s screen to work. That’s more work than the integrated Target Wallet solution they have today. For their most valuable customers, the checkout experience would be a little worse.

So What’s the Problem? Should They Even Add Apple Pay?

You probably beat me to it, but Wallet is limited to Red Card holders now, which accounts for a little over 20% of their overall transactions3. That’s pretty good for a store card, but it limits the number of people who can take advantage of their mobile payments solution. Getting people on board with mobile payments is hard enough, and limiting your scope to 20% of your customer base is just setting yourself up behind the 8 ball.

Also, with 60% of US retail locations taking Apple Pay, it’s starting to look unfashionable to not accept it. It’s becoming as common as accepting credit cards at all, and it will eventually feel like they’re old and stodgy when it comes to payments if they don’t have the things people expect. This is an even bigger problem if people start leaving wallets at home or in the car. Many people don’t carry cash anymore, and we’re getting closer to a world with people doing the same with plastic cards.

Oh yeah, and they’re already spending a ton of money to remodel a bunch of their stores right now, so why not add a little more to that heap of cash and modernize your payment terminals a bit?

But all that said, I think that Apple Pay, Google Pay, and all other mainstream contactless payments are table stakes today. I know l’m on the bleeding edge of this stuff, but I’ve long been more surprised when someone doesn’t take contactless payments, not when they do, and cashiers no longer bat an eye when you pay with your phone (they still sometimes do for the Apple Watch) like they did when this first rolled out.

I hope Target gets on board with all manner of contactless payments, but based on everything above, I don’t see how that is a reality in the very near future. I’m quite confident it will happen, but I don’t think there is the pressure there today to make this something we see in 2018-19.

Everything but the Pixel 3!

The Pixel 2 is a very good smartphone, and it’s biggest…