The Official Twitter App is Better Than You Think

What if we nerds used Twitter the way it's meant to be used and not like we used it 5 years ago?

This is the question I aimed to answer when I switched Tweetbot off on my Mac, iPad, and most critically of all, my iPhone. I love Tweetbot, and I genuinely think it's one of the best apps out there for each platform it is currently on. I also remember all the terrible things Twitter did to their app after they acquired Loren Brichter's amazing Tweetie app back in 2010. You could say there was some bad blood.

But a lot has changed since 2010 and the Twitter app has gone through a bunch of changes. Even young Federico Viticci told us were clinging to the past with our "traditional" Twitter apps.

But 2014 Twitter is bigger than Twitterrific and Tweetbot. Today’s Twitter goes beyond text and a traditional display of the timeline – it encompasses native photos (and soon videos), interactive previews, advanced recommendation algorithms, photo tagging features, and a fully indexed search. I didn’t know how much I would come to rely on Twitter’s new features until I started using the official app and now, in spite of design details and advanced functionalities that I still prefer in third-party clients, I don’t feel like I want to switch back.

I've been using the official Twitter apps on and off for the past month, and finally started using them full time about a week ago. Here's what I like and what I miss.

A few days ago, I had a post get some attention and my Twitter stream was more populated than normal. Tweetbot would not have handled this particularly well, but I was able to keep up with replies, retweets, and new followers all within the Notifications tab of the app.

Tweetbot (and Twitterrific, for that matter) is good at showing you notifications for replies and DMs, but it falls down when it comes to seeing everything else that's happening across all of Twitter. As an example, I was mentioned in this tweet, and the app kept me up to date with what was going on. It did all of this for me within the notification tab too, I didn't get notified every time something happened. I was able to just check in when I was in the app and see what was going on.

This is even more helpful for connecting with your new followers. In Tweetbot, if I miss a notification that someone new has followed me, I have no way of finding out who that person was again. Twitter conveniently keeps a record of your recent followers in your notification area so you can take a look at your convenience. If you have 1 million followers this may not be useful, but for someone like me who tries to know everyone who follows me at least a little, this has been wonderful to have.

Third party Twitter apps do a fine job of getting you the basics when it comes to notifications, but Twitter simply has more direct access to their data. The argument could be made that Twitter should open that data up to the API so apps like Tweetbot can get that as well, but as of today it's a big advantage for Twitter.app. 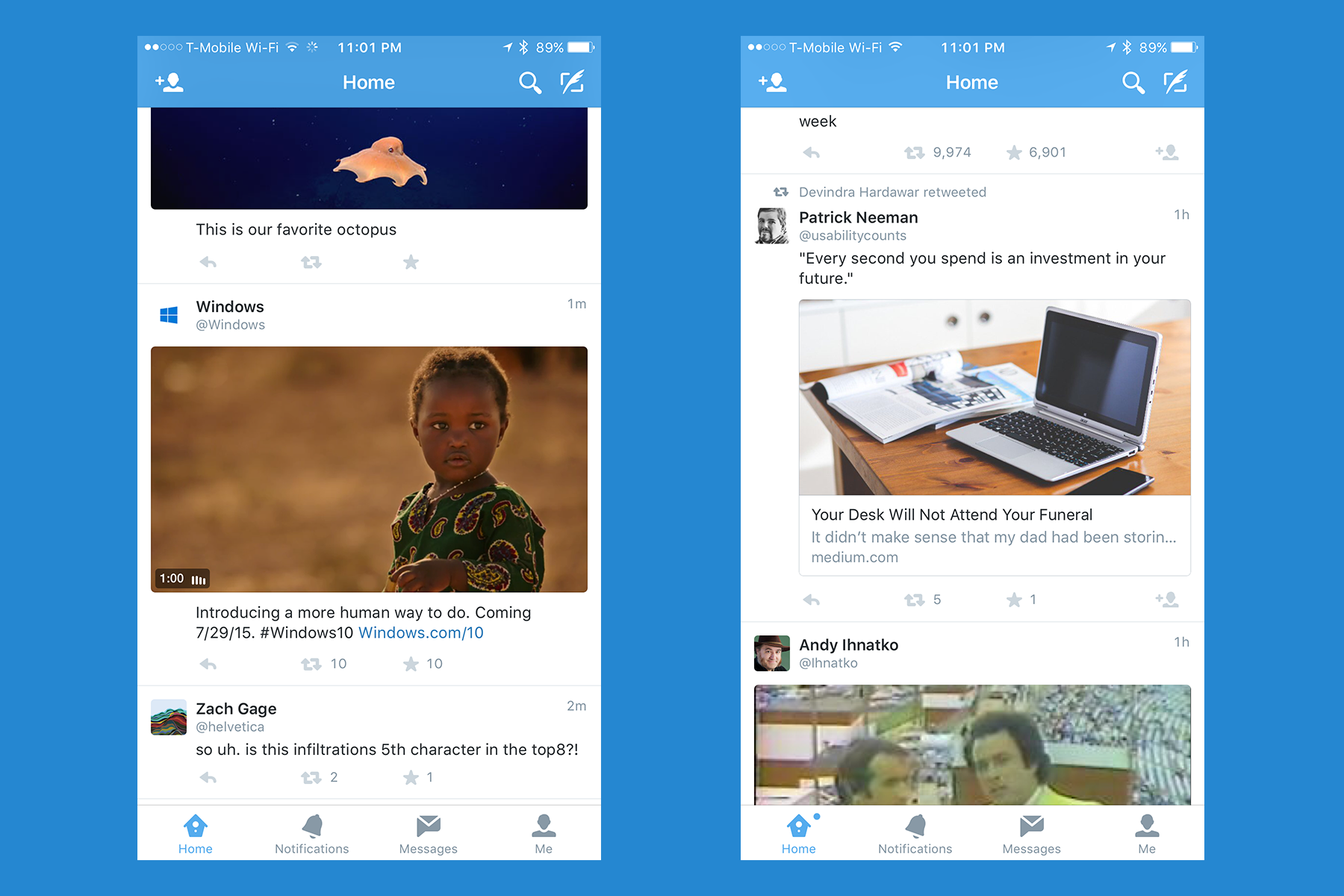 In...line...GIFs. That's my argument right there. Most GIFs play inline in the timeline so you don't even need to tap them for them to play. You also get auto-play in videos (muted audio, thank god) uploaded via Twitter. I know there are people who prefer their timeline to be just text, or that media only play when they ask it to, but I'm not one of those people.

And then we have Twitter Cards, which are amazing! Again, this breaks the text-based concept of Twitter, but I like them. The fact that these cards create a more visual representation of the content being linked to is just the start. They have the added benefit of displaying the title and description of the article in a way that doesn't count towards your 140 character limit. You can more easily make a comment on the linked piece without the title and source of the link eating into your 140.

These are all little things and they don't really matter that much, but they make the app seem just a little more delightful. That's important when it's something you're going to be using many times each day.

It's a little embarrassing, but I have definitely started favoriting more tweets lately so I could see that little star animation. Lame, I know... 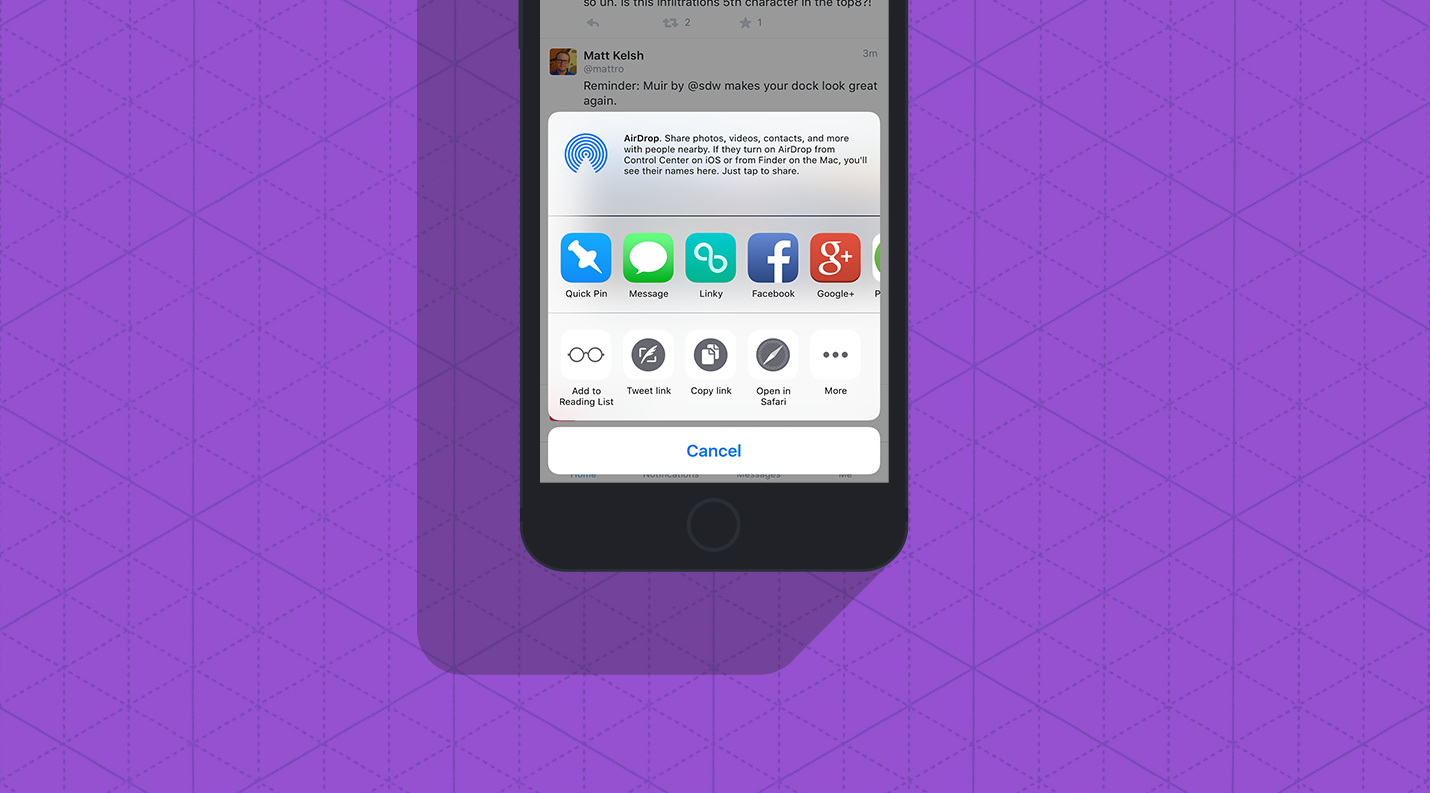 This is a new addition to the app, and it's honestly the thing that has convinced me to go full time on the app.

I'm a nerd who likes to save things for later, so naturally I have a Pinboard account where I send all my "read later" links. I have been using Pinner for iOS to save interesting things for later when I'm on my iPad or Mac. Twitter would like me to read everything within the Twitter app and share it back out to my timeline every time, but that's just not how I work. I may be able to change my default Twitter app, but I can't as easily change my entire news gathering and consuming workflow. For years, Twitter.app didn't allow you to share things you found on Twitter out to any other service besides email or SMS. This is good for Twitter, but it's not good for me.

This was an especially egregious move because iOS has a share sheet built into the OS that takes next to zero effort for the developer to implement. It can handle sharing to anything your heart desires (and that you have installed on your phone). And just last week Twitter enabled the share sheet in their app and I'm in heaven. I can see a nice-looking Twitter Card in my timeline, tap-and-hold on it, and save it to Pinboard.

I know this was a hold up for a lot of people, so if that was your sole hold-up on using this app, you may want to give it a try again.

It's not a perfect experience, however. There are a few things that still nag at me when I use the app.

Twitter completionists will shudder at the thought, but Twitter doesn't sync your timeline position...at all. Twitter clearly wants you to be interacting in the moment with people. Did someone tweet 5 hours ago and you missed it? Fat chance of finding it. Twitter will load the last 100 tweets or so into your timeline. And if you've been gone for a longer time, it will shoot you *GASP* straight to the top of the timeline.

I know, I know, this is hard to take, but it's not that bad. Yes, you will miss things due to this behavior, and yes it may drive you mad at first. It's still something that I'm coming to terms with.

To aid in the frustration this can cause, Twitter does have a "While You Were Away" section that they put at the top of your timeline when you have been away from the service for more than a few hours. They have some sort of algorithm that finds tweets that either got lots of interactions (big news) as well as those from the people you interact with most. It's a decent solution to the "fear of missing out" that so many of us completionists suffer from.

The positive spin of this is that I'm always interacting with fresh content. I never get that "I want to reply, but this tweet is from last night" feeling I sometimes get. I hope I'm not the only one who gets that. 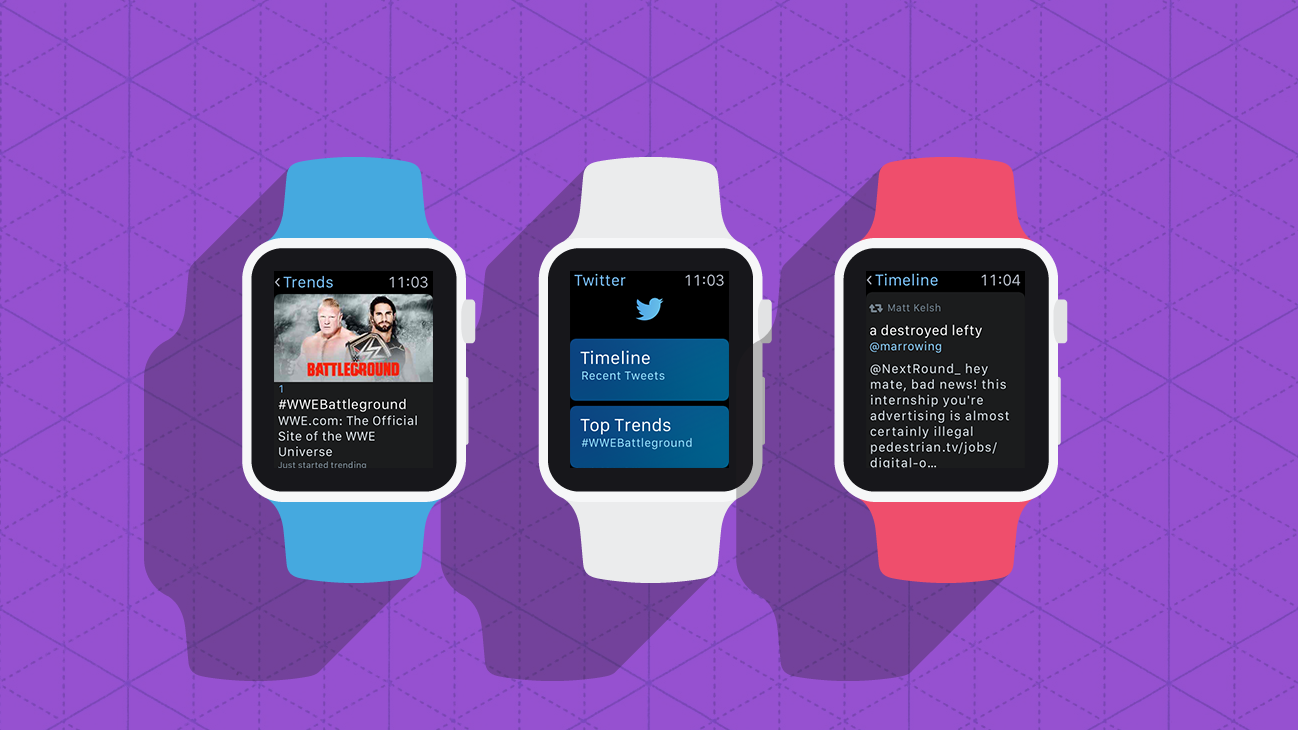 I mentioned on my podcast this morning that I think Twitterrific's notifications on the Apple Watch are the best on the platform. The Twitter app also has a Watch app, but it's not nearly as useful as Twitterrific's.

The Glance shows trending topics, which I don't really care about, and the app itself shows your full timeline, which I would never want to browse on a 1.5 inch screen. My solution has been to set up Twitterrific to send me notifications on my Watch, and I'll use the Twitter app on my phone to do anything that's too complicated for the Watch.

It is my great hope that Twitter is working on a whole new app for watchOS 2 that's coming out this September.

Twitter has a lot of ads...I'm sorry, "promoted tweets."

So where does this leave us? Am I leaving my boutique third party Twitter clients in the dust? For now, yes. I've had time to dip my toes into the water and yeah, it's a little different from what I'm used to, but I am already getting used to it. There are even things that I really like about it.

I feel like my relationship with Twitter has changed in the past month based solely on the apps I'm using to interact with it. Even now after breaking down the pros and cons of the official apps, I still find it hard to verbalize what it is that is driving that change.

All I can say for sure is that I love Twitter despite it's many flaws, and I feel refreshed that for the first time in years I am using the service the way it's meant to be used. New isn't always bad, but check back with me in a few months and see if I'm still using the official apps.

Bite Size Tech #11: Always a Safe Bet to Predict Something Will Fail

Postmark gives all their employees Apple Watches, Beme and Livetext launch, and…