Google may not have said a word about Wear OS in either their keynote or technical state of the union, but they did hold a single session on the platform on the first day of the conference.

Quick side bar: remember back in 2014 when Apple needed to release a response to Android Wear immediately else they were going to be dead in the water? Just 4 years later and Apple is dominating this market and Google is devoting a total of one out of over 100 sessions at I/O this year.

They kicked off the session talking about renaming the platform from Android Wear to Wear OS. This slide made it pretty darn clear why that made sense: 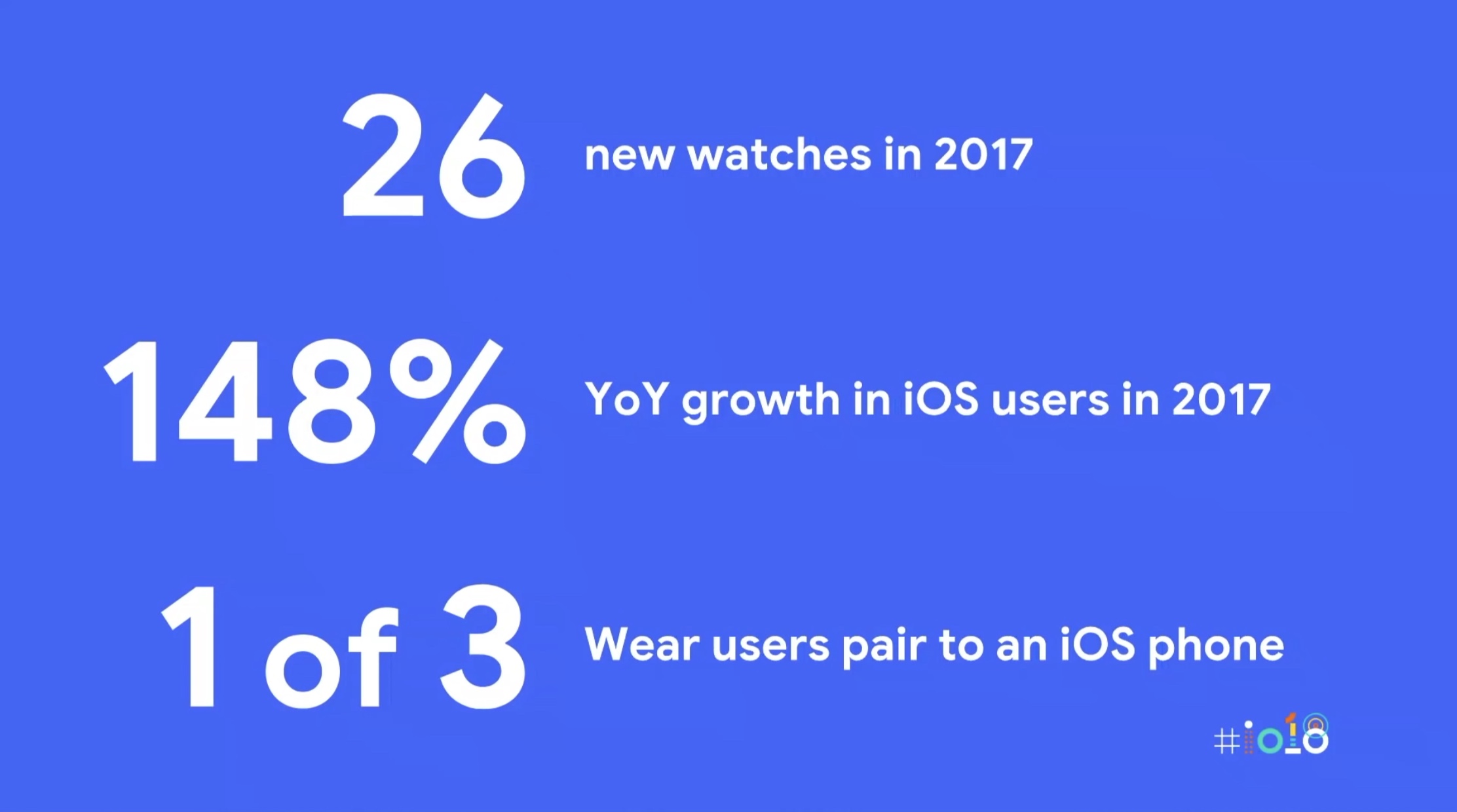 As for updates to Wear OS, they didn’t have a lot. Android Wear 2.0 released back in February 2017, and it was announced at Google I/O 2016. It looks like there are not major versions of Wear coming this year. 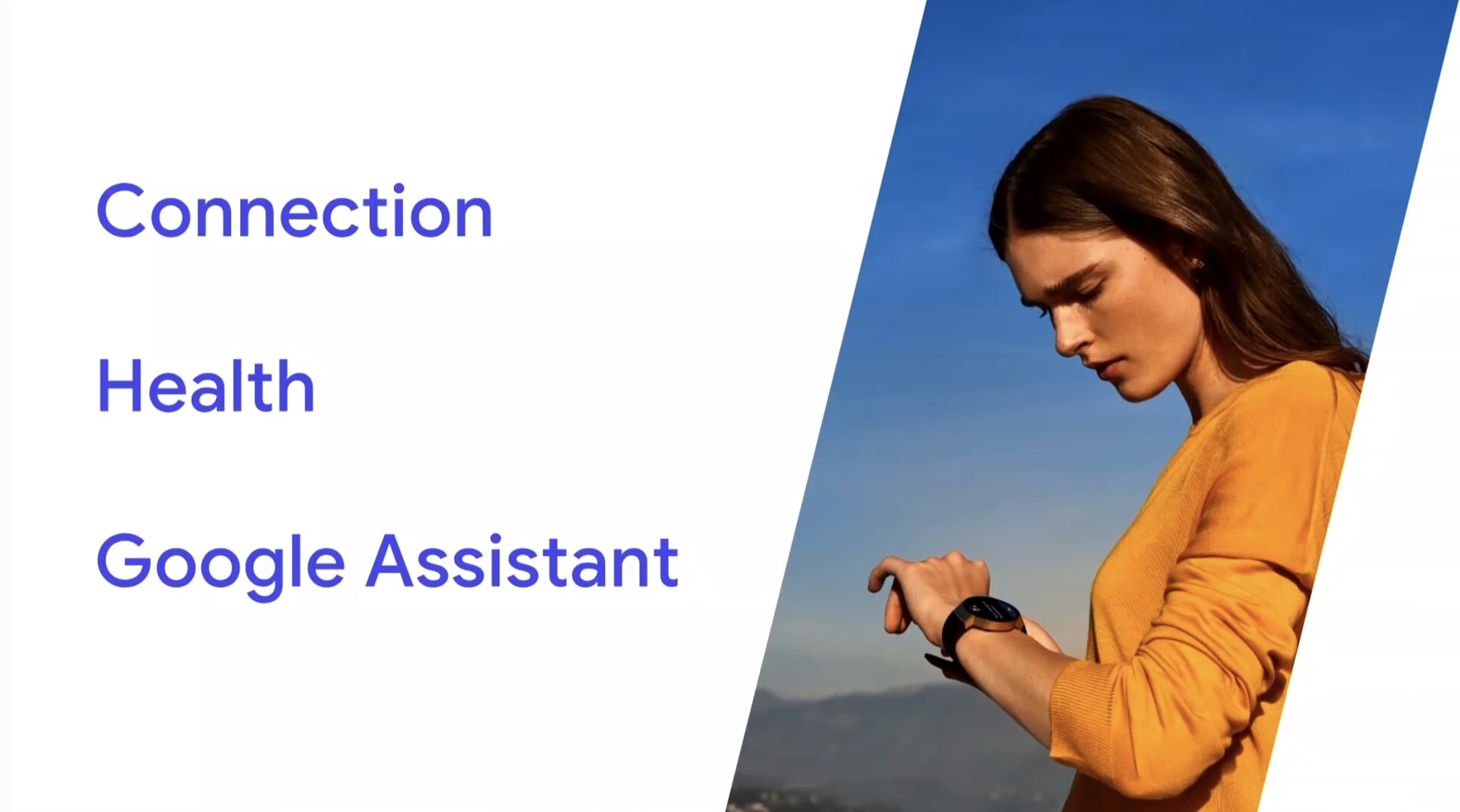 Google said their upcoming updates to Wear OS were centered around connection, health, and Assistant.

There was literally nothing new here. They talked about better complication support on watch faces and how Wear allows you to leave your phone behind and still be connected.

This section had a little more meat on the bones, but Apple Watch fans won’t find anything to be jealous of. 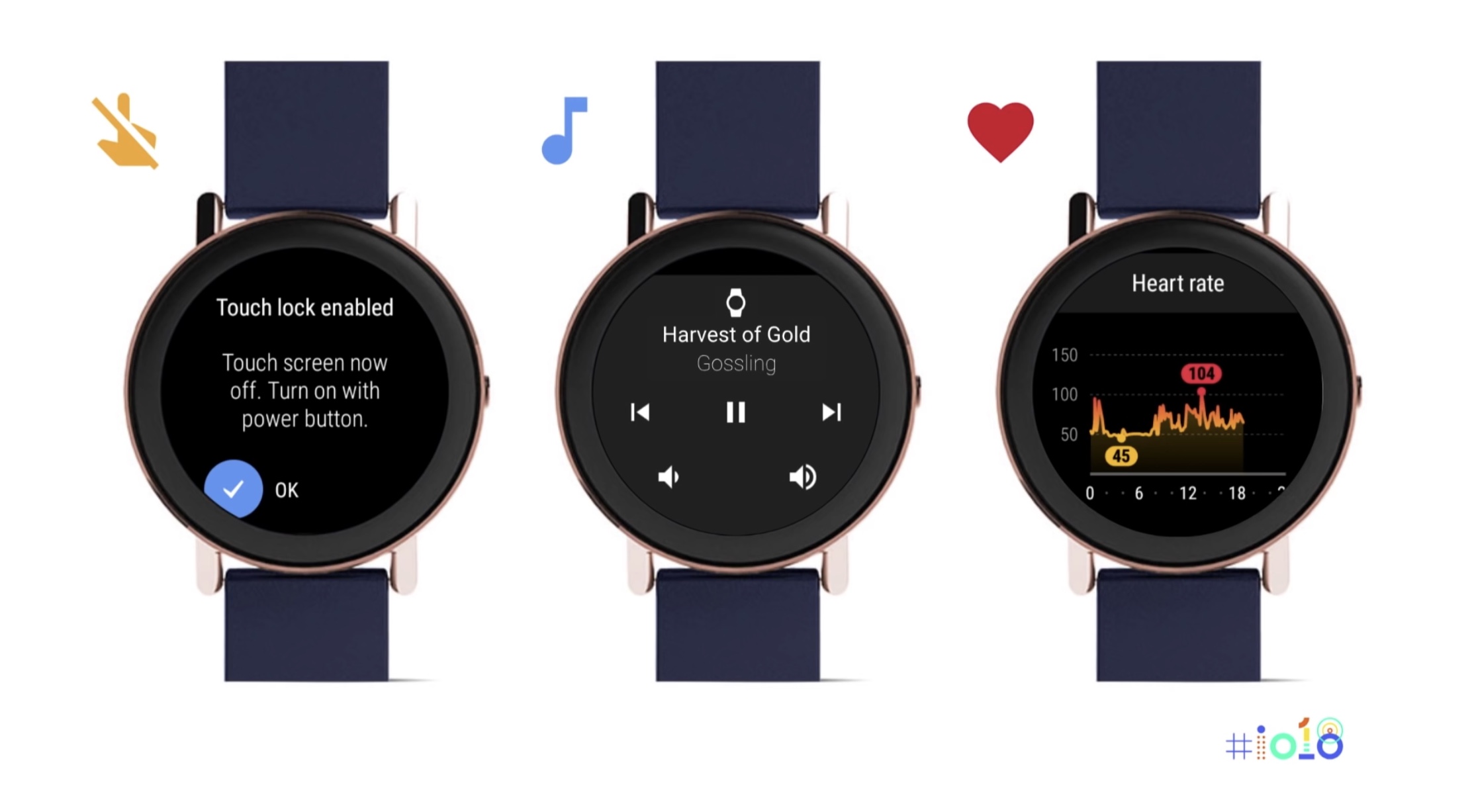 They added the ability to lock the screen when doing a workout (hello watchOS 3), media controls in the workout app (hello watchOS 4), and constant heart rate monitoring to get a picture of your heart rate during the whole day (hello watchOS 1). And all of this has to go through Google’s upsettingly confusing and incomplete Google Fit app.

If I sound sassy here it’s because Google fell very far behind here and is barely catching up to where Apple was a year or two ago. 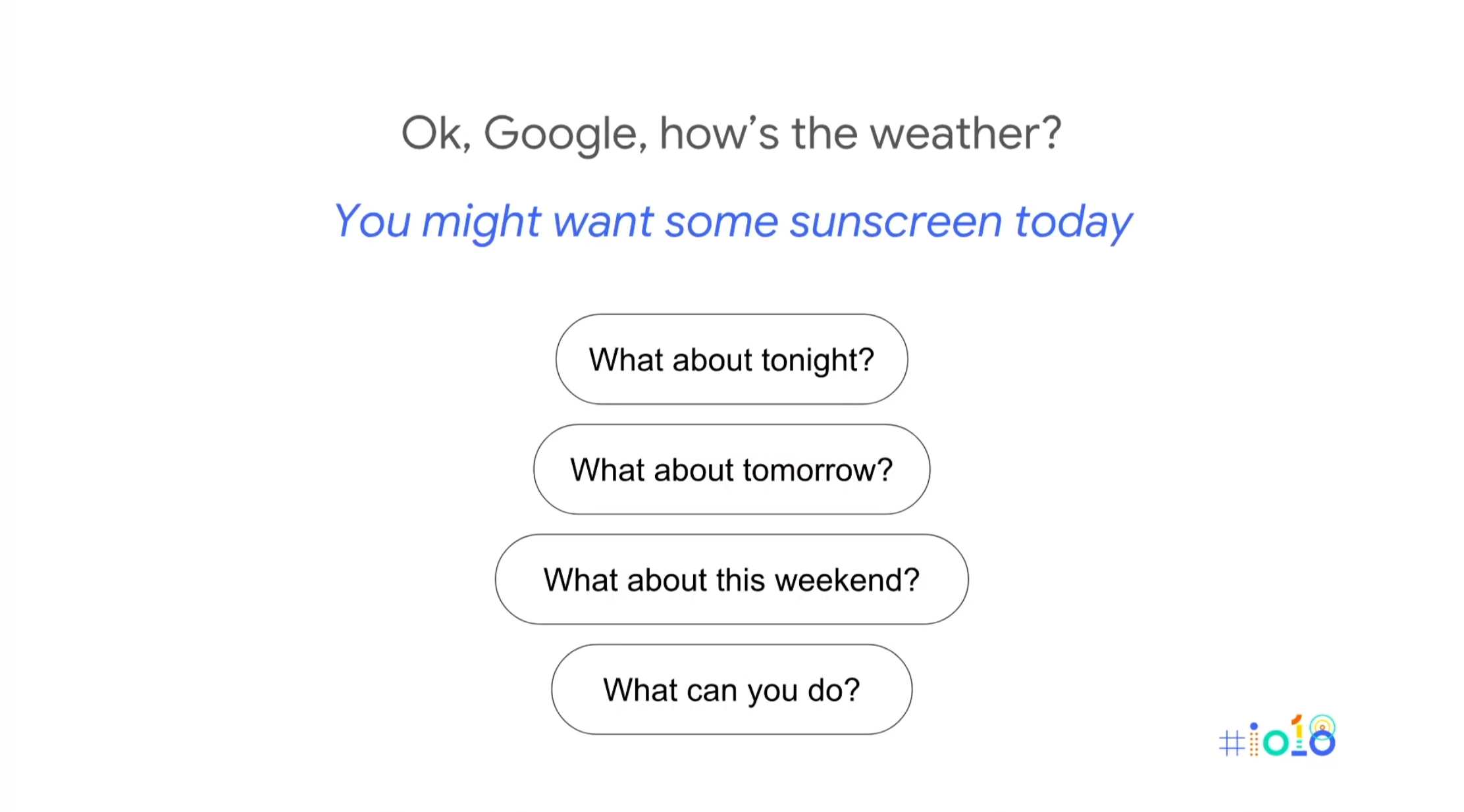 This is the biggest potential differentiator for Google, as Assistant is better than Siri in almost every area. They showed off Actions on Google, which lets you perform actions through third party (and first party) apps. watchOS lets you do this via notifications, but Google’s option lets you do more via voice, which is really nice.

They also added the ability for Google to guess what you might also want to know about something and present options for follow up questions. The Assistant app on smartphones does this today if you want to get an idea about it, but it’s definitely a nice to have.

Quick tangent on round watches 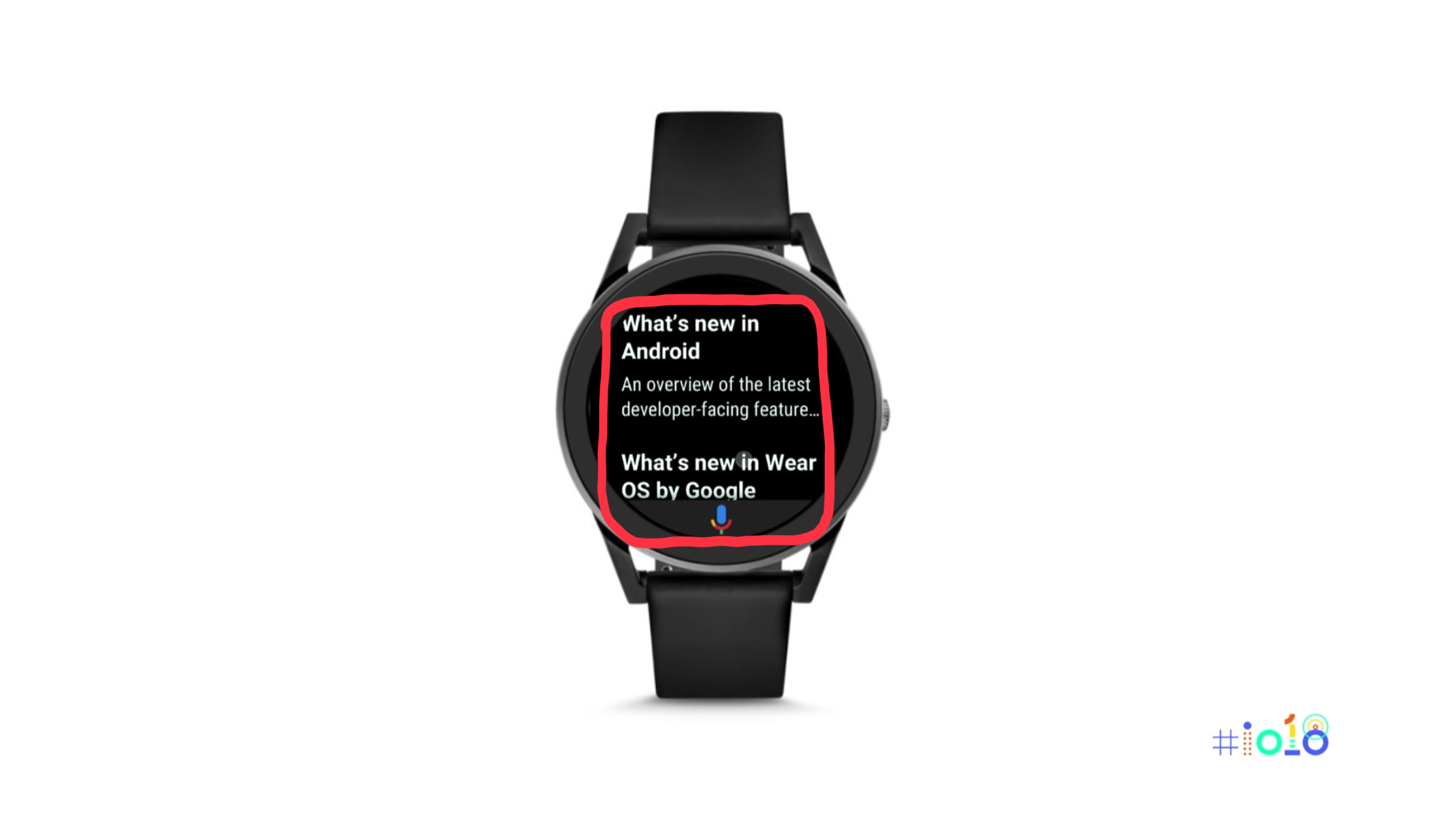 All of their examples were on round watch faces and I couldn’t stop thinking about how much wasted space all of these round watches have. The watch face can take advantage of the shape, but all apps look worse or have more blank space because of this shape.

I tried to illustrate it above, but that watch could be so much smaller and show the same amount of data.

Google didn’t seem like they cared at all about Wear OS this year. It was not giving any time during the prime time keynotes, and what they did have to show was extremely barebones. As an Apple Watch user, I didn’t feel like this update did anything to make me raise my expectations for what Apple chould do in watchOS 5.

I Have One of Those Floaty APKs: My Return to the BYOD Podcast