What is a computer?

I saw the below two videos today and they both really struck me by how these videos are evangelizing different products, but they’re saying the exact same thing: computers ain’t what they used to be.

I think smartphones have done more damage to the PC industry than was originally obvious. I firmly believe that smartphones are the new PC, and I think it’s hard to argue they’re not. Look at this slide from Apple’s 2001 MacWorld presentation: 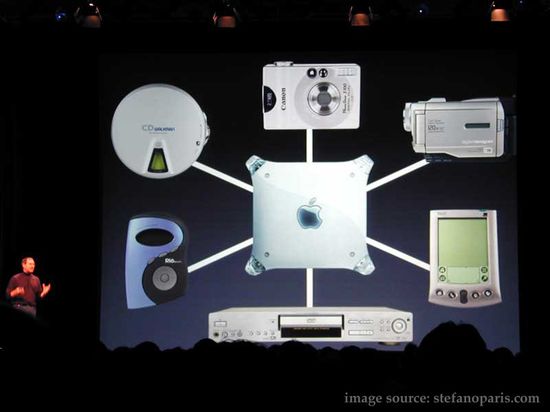 At the time the PC was the “digital hub” of your entire life. All the tech you used funneled through this device so your camera, PDA, music player, and more all literally plugged into your PC and the PC did stuff with that content.

In 2017 it’s pretty hard to argue that the entire slide above can be replaced by the smartphone in your pocket. Not only have smartphones replaced the cameras, music players, and task managers above, they have also become where we edit and publish that content to the world. You don’t take a picture on you’re phone and then say “I can’t wait to get home so I can download and edit this before I share it with my friends.” No, you take a picture, edit it right on your phone, and post it to literally any person you know or website in existence. To do anything else these days feels like madness. That is one example, but I think it holds true for many, many other tasks that we do every day.

What this has done is leave the PC in an ever-shrinking part of people’s lives. Arguments for the continued dominance of the PC have been reduced to “you need it for sharing documents” or “you can’t do development on iOS or Android.” While these arguments are still accurate for many (most?) people, the argument has gotten smaller and more specific over time. Not too long ago the phrase “you can’t do real work on an iPad” was thrown around a lot, but as more people have shown that they totally can do their work on iPads, the PC defenders have had to become more specific in their criticisms. The trend towards eliminating things iOS and Android devices can’t do is marching on and there’s no reason to think it will stop.

And not only are people changing their workflows in ways that make PCs less relevant, but iOS and Android are making changes to fill the gaps that are still there. iOS 11 specifically did a lot to make multitasking on the iPad more capable. iOS 11 also added a full freaking file browser that creates a standardized interface for managing honest-to-goodness files! Files! Again in iOS, app extensions have laid the groundwork for apps to natively enhance other apps (see photo extensions for the potential here), tearing down the “apps are a silo” reputation these new operating systems have gotten over the years.

If the smartphone is the new PC, then the iOS/Android/Chrome OS tablets and convertibles are their large screen companions. Look at the picture of my desk at the top of this post: the iPad sits in front of my laptop. The laptop is 2 years newer and has far more power, but frankly I find the software on the iPad to be more compelling and more consistent with the things I run on my smartphone. It’s a more natural extension of my phone and that’s a good thing. The Mac is essential for Xcode, web development, video editing, and Photoshop, but that’s not a terribly long list, and it’s also a list of things most people don’t do1.

PCs will exist for a long time, and I have no doubt that they will remain relevant for many people, but it continues to become more and more clear that the future is not macOS or Windows, it’s iOS and Android. I’ve made this assertion many times, but it’s good to be reminded of it from time to time.

The BirchTree Podcast #42: Tech I'm thankful for this year